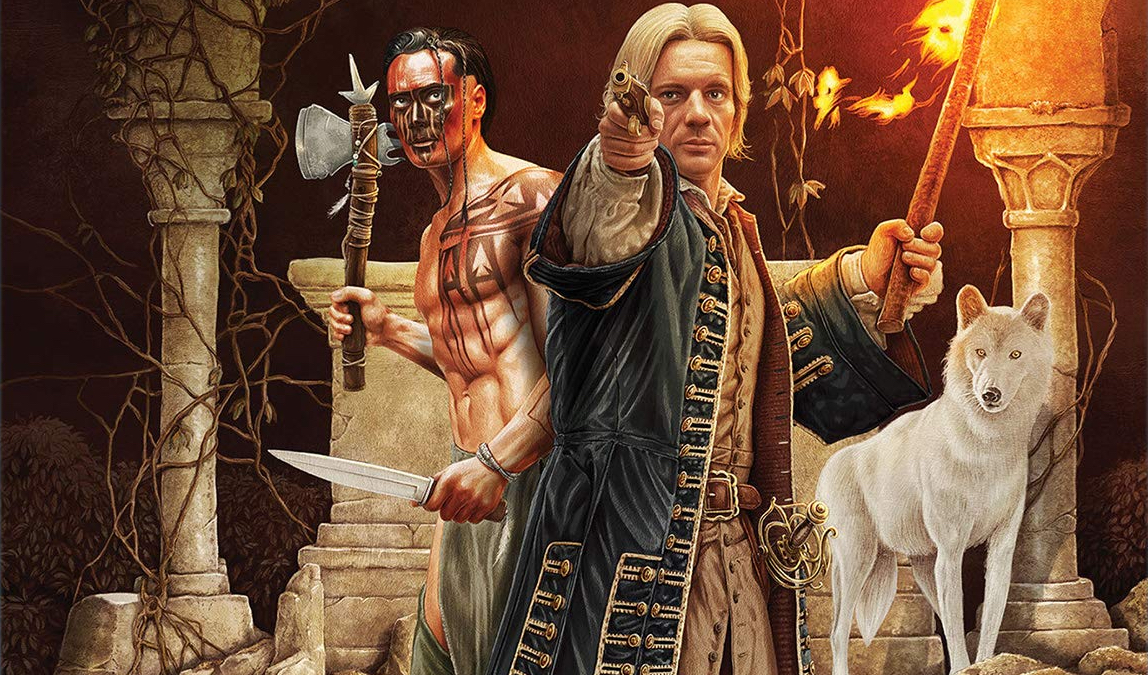 Twenty years later Christophe Gans’ Brotherhood of the Wolf still kicks ass.  Scream Factory has pulled out all the stops for the US Blu-Ray Debut.

Christophe Gans takes the 18th-century French legend of the beast of Gévaudan twists, turns, and contorts it into a sweeping action horror epic.  Brotherhood of the Wolf is a mystery, a horror film, a political intrigue thriller, a costume drama all rolled up into a sexy Martial Arts wrapping.

Marquis d’Apcher on the eve of the French Revolution recounts the strange mystery of the beast that killed so many innocent people in the Gévaudan decades prior.  The King’s naturalist (this part gardener, part scientist, part adventurer, part explorer) Knight Grégoire de Fronsac (Samuel Le Bihan), and his friend/companion Mani (Mark Dacascos) arrive as pilgrims in an unholy land.  With the help of a much younger d’Apcher, Fronsac, and Mani attempt to figure out what this murderous beast is.  They are not only thwarted by the French Soldiers bent on killing the beast and taking the glory but the aristocrats of the region who have more of a part in this than they may first appear.

One will know if the film is for you in the first ten minutes as Gans sets up both the horror elements and action elements with two expertly executed set-pieces.  If one isn’t on board after either of these two there is no hope.  The way that Gans takes the horror elements and infuses them with the sort of flourish that Spielberg uses in Jaws hiding the beast from us for three acts is ingenious.  Doubly so with the way that Gans creates action/fight scenes akin to Tsui Hark or Yuen Wu-Ping.  It should come as no surprise after watching the film that Jackie Yeung and Phillip Kwok are the fight choreographer on the film.  Those American and Chinese influences add to the originality of this French-Language genre film.

Brotherhood of the Wolf is assured in its execution, visuals, action, and all-around design.  Gans as the co-writer/director writes the new Millennium’s first Arthouse Action film.  It isn’t that Gans throws everything together caustically.  There is a truly artful and adroit way that the film is constructed as an 18th Century Costume Drama, an Animal’s Attack thriller, and a 21st Century action film.  Gans working with co-writer Stéphane Cabel and editors David Wu, Sébastien Prangère, Xavier Loutreuil contribute to creating a film that doesn’t balance but uses the genre troupes to juggle between all the genres creating a heady brew that is just as welcoming to any genre or art-house fan.

NOTE: The 152-minute Director’s Cut is the only cut that’s been included.  The theatrical cut runs 143-minutes.

The transfer that StudioCanal has provided to Scream Factory is aces.  The image is sharp and beautifully transferred to Blu-Ray.  Even in the most taxing of hard color graded scenes the transfer shows no signs of digital artifacts.  Bravo to StudioCanal and Scream Factory for an excellent presentation.

Note: the special features are on disc two of the set to give the feature as much space as possible for a very pleasing transfer.

Deleted Scenes with Introduction By Director Christophe Gans (40:08) – Five scenes that are in various stages of completion.  The best part is that Gans gives an explanation as to why and what was cut.  Even better still is the fact that he begins with an extended version of the first iconic Fight scene (note their use of the Aliens score as temp track)!  After the scene plays you are treated to not only Gans additional comments but some behind-the-scenes footage intercut.  Other scenes include a forensic scene at the place of one of the attacks, a scene between Fronacs and Marianne, another Fronacs and Marianne scene set on a frozen lake, and finally, the extension of the taxidermy scene and finally a 9-minute montage of ends and bits that were trimmed from the film set to Joseph LoDuca’s Morricone inspired score.  Each of the scenes has Gans speaking about them before and after with his inspirations and why they were cut.  Fans of the film will definitely want to check these out as Gans explains in his interview these aren’t even in the extended director’s cut he did.  In French with English Subtitles.

The Guts of The Beast (1:18:11) – is an archival look at the creation of the film.  This is an old-school feature-length making-of documentary that you found during the DVD golden days.  In fact, this was a part of the massive DVD Special Edition released in France and eventually released in the US years later.  Nothing has changed about this making-of looking at the development of the script, the development of the fight scenes, and the use of make-up and digital effects.  That is to say that it’s an amazing deep dive into the processes of the French making a huge, big-budget genre film in a way that only the French could do so.

The Making of BROTHERHOOD OF THE WOLF (1:17:54) – is another archival look at the making of the film.  A companion piece to The Gus of the Beast.  This much less structured but far more fascinating look at the making of a film.  This is more akin to the Magnolia making-of with a fly-on-the-wall style of documentary.  This shows the production in a “warts and all” point of view.  The result is an engrossing look at one of the biggest French productions at the time.  Of note, this was directed by Patrick Laugier who would later go onto direct the transcend and controversial Martyrs.  French with English Subtitles.

The Legend (17:23) – is an archival interview with writer Michel Louis looking at the Historical facts behind the Legend of the Gévaudan Beast.  The writer who Gans had said took inspiration from his historical account is a great and very salty interview as he recounts the actual events, his theories on the beast, what actually occurred, what’s fact and fiction, and his thoughts on the film.

Brotherhood of the Wolf has been treated like the genre classic it is.  Highest Possible Recommendations!