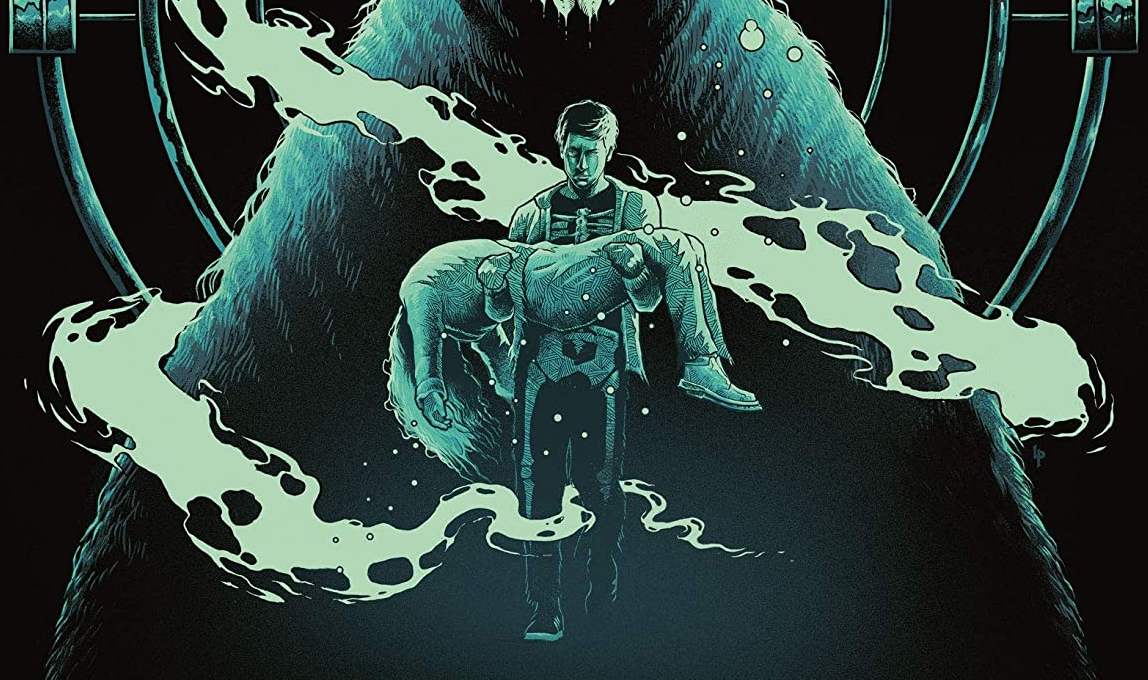 A new coat of UHD Paint makes this already brimming set that Arrow Video released in 2017 all that more irresistible.

NOTE: This review is of the theatrical cut.

Donnie Darko tells the story of a young man’s attempts to save the world (possibly).  Richard Kelly’s debut feature is still a powerful and challenging bit of science fiction drama.  The film is steeped in the prose of Stephen King, the unsure times of the early 2000s, conservative leanings, middle-class malaise, and the work of Stephen Hawking.  These are not just fly-by-night visual references or wholesale rip-offs. There is something organic at the core of the story.  It isn’t mere cinematic cannon fodder.  It’s headier than that.  Kelly imbeds those references deep into the broken soul of the film.

The premise is simple; Donnie Darko (Jake Gyllenhaal) may have psychological issues, he sleepwalks and sees things.  Turns out that those “psychological issues” are not issues at all but powers that he has been given for a specific purpose.  The purpose as his Spirit Guide Frank the Bunny tells him is to stop the end of the world.  Donnie and his inevitable march to his fate is tracked over the 31 days of October culminating during Halloween night.

The film’s plot may be simple but the film and the layer upon layer that Kelly creates within the film is anything but.  As a film, Donnie Darko tells not just Donnie’s story but the ones of those around him.  Many critics will oftentimes equate films to novels in how they approach a story, in most films that term does not seem applicable.  Here is seems as though it should apply. Though we follow Donnie and his possible descent into madness, we see the various characters and their arcs.  Sparkle Motion the dance troupe that Donnie’s sister Samantha belongs to.  Cherita and the constant abuse she suffers from others around her.  Younger teacher Mrs. Pomeroy’s difficulties in a very conservative school trying to reach apathetic students.  Jim Cunningham and his rise to evangelical fame through hokey self-help videos.  Rose and Eddie, Donnie’s parents, dealing with two of their three very smart but socially combative children.  The film never feels pastiche but beautifully organic with its storylines interweaving in the same way that PT Anderson was able to so successfully do so in his brilliant film Magnolia.

The film rests on the shoulders of Jake Gyllenhaal in an early career performance.  As Donnie, Gyllenhaal shows the promise of the actor that would make Brokeback Mountain and Zodiac. The unsteady nature of Donnie and how he ebbs and flows from confidence to uncertainty is fascinating to watch.  The actor’s performance never titters into “the kid isn’t alright” type of histrionics.  Gyllenhaal plays Donnie with the fearless commitment he would later show in Nightcrawler.   Donnie knows he’s crazy but finds falling into that particular hole like a warm embrace he cannot stop himself from doing.  Donnie wants to believe he is the savior of the world as Frank the Bunny tells him.  Gyllenhaal’s performance makes you believe that the young man goes between faith to disbelief in a natural way.

The final act of the film brings everything together in a way that still to this day fifteen years later is jaw-dropping great.  Kelly aims for the stars and hits every single one of them.  The moment of dark grace as Gary Jules’ version of Mad World plays is powerfully heady stuff.  There is no denying that this single film and everything contained in it was Richard Kelly’s magnum opus.  An instant classic (cult or otherwise, you be the judge) that has slowly but surely risen in esteem to the pantheon of great science fiction dramas.

I said it back when Arrow Video’s first Blu-Ray release of Richard Kelly’s master work and I’ll say it again this time with more emphasis… This transfer is gorgeous.  The UHD disc is nothing short of a marvel.  The HDR encoding brings out the already impressive details of Arrow Video’s transfer.  The film had a notoriously dark low contrast look that made the film never come alive in any of its home video presentations.  This disc pushes everything good about Arrow Video’s Blu-Ray and ups it to the Spinal Tap patented “11”.

Arrow initially worked with Kelly and DP Steven Poster on a new 4K restoration.  Now they’ve gone back and done an entirely new 4k Restoration with the beauty that HDR encoding can imbue a film with.   The film (in both theatrical and director’s versions) looks stunning.  The contrast levels have been widened to give a better variance in the blacks within the picture.  That murky look is a thing of the past; the transfer has a definition that hasn’t been there previously.  The grain structure is a little lighter than I like but that is more of a personal preference as the film is razor sharp, something that no other version has been without it being at the expense of the picture.  This is truly a definitive edition for a film that’s been so troubling on home video.

Note other than ephemera this disc has the same special features from the 2017 Blu-Ray release:

The three commentaries are all fascinating.  Though I have rallied against the director’s cut the best of the three commentaries is the Kevin Smith and Kelly Commentary.  The commentary is lively, intelligent, informative and most of all funny in the best way possible.  Smith is able to get Kelly in a very relaxed mood for a very great commentary.  The two from the original theatrical cut are very much from the PT Anderson Boogie Nights cast and crew commentary.  There is great info in these two but if you are looking for the “technical commentary” or “nuts and bolts of filmmaking” stick with the Smith and Kelly one.

The inclusion of Kelly’s short film The Goodbye Place is a fascinating bit allowing a window into Kelly’s mind and the fact that he had been thinking about Donnie Darko for a very long time.

The rest of the special features are an archive of all the content from the various Home Video editions released for Donnie Darko.  They’ve included the featurettes from the original 2002 release, the commentaries (already discussed), the deleted scenes, interviews and the music video for Mad World.

Richard Kelly’s masterpiece Donnie Darko has been given a beautiful new 4K restoration with a Dolby Vision and HRD-10 color grading, combined with every piece of archived material from previous home video releases make this a package too good to pass up.  HIGHLY RECOMMENDED!