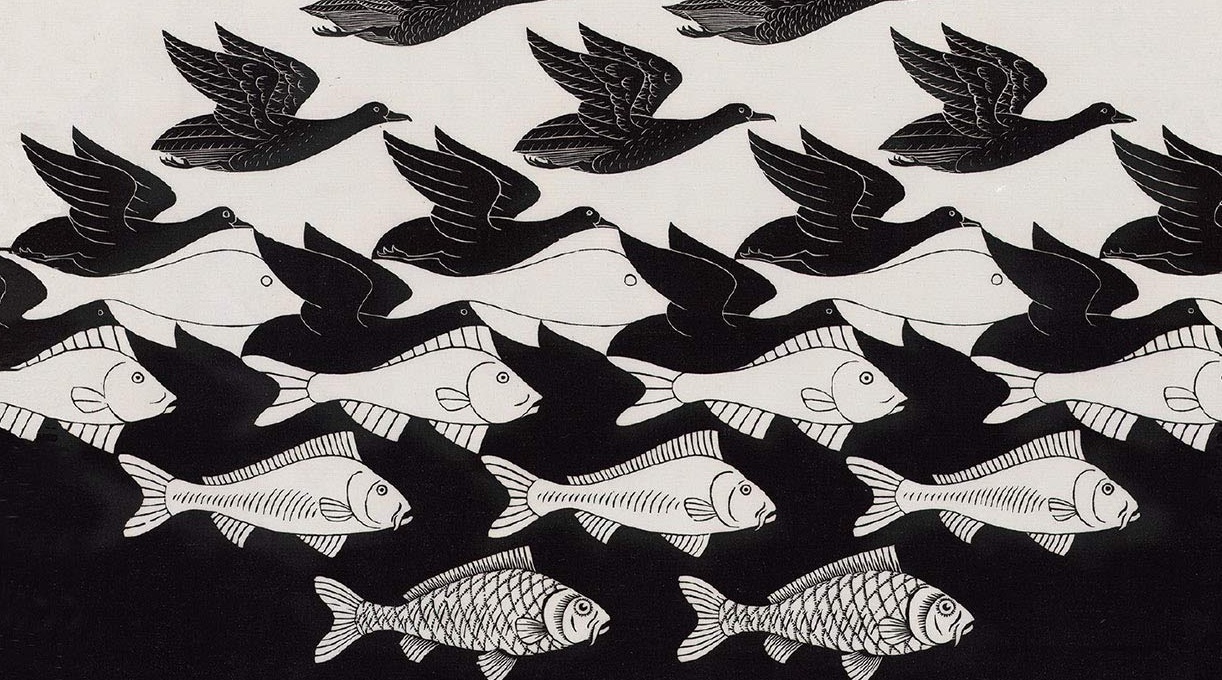 M.C. Escher: Journey to Infinity is a beautiful documentary that attempts to unravel the marvelous artistry (and math) behind the artist’s work. New from Kino Lorber and Zeitgeist Films to Blu-Ray.

The smartest move in an already adroit documentary about the visually confounding artest M.C. Escher is pairing the man’s words with Stephen Fry’s wry British timber.  M.C. Escher: Journey to Infinity much like the work of the man is visually dazzling.

Many documentaries attempt to document artists but fail becoming a series of talking heads never delving into the most fascinating aspect of any artist.  That is how they came to the specific style.  Director Robin Lutz’s film is exactly about that specific aspect of Escher’s work.  All of the details that pushed the self-proclaimed “Mathematician” to create the art he did is beautifully recounted here.

The “talking heads” are kept to a minimum.  The subjects that are on screen are usually for emotional impact or resonance.  The film is never a visual fest at the expense of emotion.  Rather Lutz finds the emotional core and how both traumatic, harrowing, and beautiful moments shaped Escher into the artist and man he became.

The film is adroit about the way it visually tells its story using Escher’s Art, Personal Photos, and Historical Visuals to show us how Escher went from a rudimentary artist to the stunning visualist that found a renaissance in the 1970s and inspired Christopher Nolan.  Coupling that with Escher’s own words the film is able to do what so many documentaries never achieve, clarity on the development of an artist.

M.C. Escher: Journey to Infinity is the right balance of visual splendor and emotional resonance that will be an expected viewing for those willing to take the leap.

The documentary has been perfectly rendered to home video by Kino Lorber. The most important aspect of a film about Escher must be the rendering of his art on screen.  This Blu-Ray does not disappoint giving us a handsome reference-quality razor-sharp image.

Stephen Fry, narrating the film: M.C. Escher: Journey to Infinity (1:59) – a 2-minute clip of Fry at work narrating the film.  The behind-the-scenes look at his work is very interesting as he works things out with the filmmakers and sound edtiors.

The Making of M.C. Escher: Journey to Infinity (8:01) – an all too brief behind the scenes look at the making of this documentary.  Yes, it may be a little meta that it’s a documentary about a documentary but considering the nature of Escher’s work… very fitting.  The featurette looks at filming in the cathedral, interviewing Graham Nash, photographing the beautiful European exteriors for context, and the woman getting a Tattoo of Escher’s work.

Behind the Scenes still gallery (3:53) – the 45 images consist of the crew as they work around the world on the documentary.  The gallery runs automatically, or the Next and Back chapter buttons can be used on your remote to navigate.

M.C. Escher Home Movies (2:14) – possibly the most interesting featurette.  Silent film home movies shot in what it looks like the 1960s with B&W Super8 shows Escher with his child as they do various family activities like taking a walk or showing the child one of his work’s of art.  Fascinating and has a bit of a Bergman feel to them (it may be of the location and also that Escher himself looks like Max Von Sydow).

Rounding out the special features are the trailers for M.C. Escher: Journey to Infinity (2:17), Acasa, My Home (2:13)

Kino Lorber has given us another great documentary loaded with special features.  Highest Possible Recommendations!!!

Kino Lorber’s Blu-Ray of M.C. Escher: Journey to Infinity is out May 4th