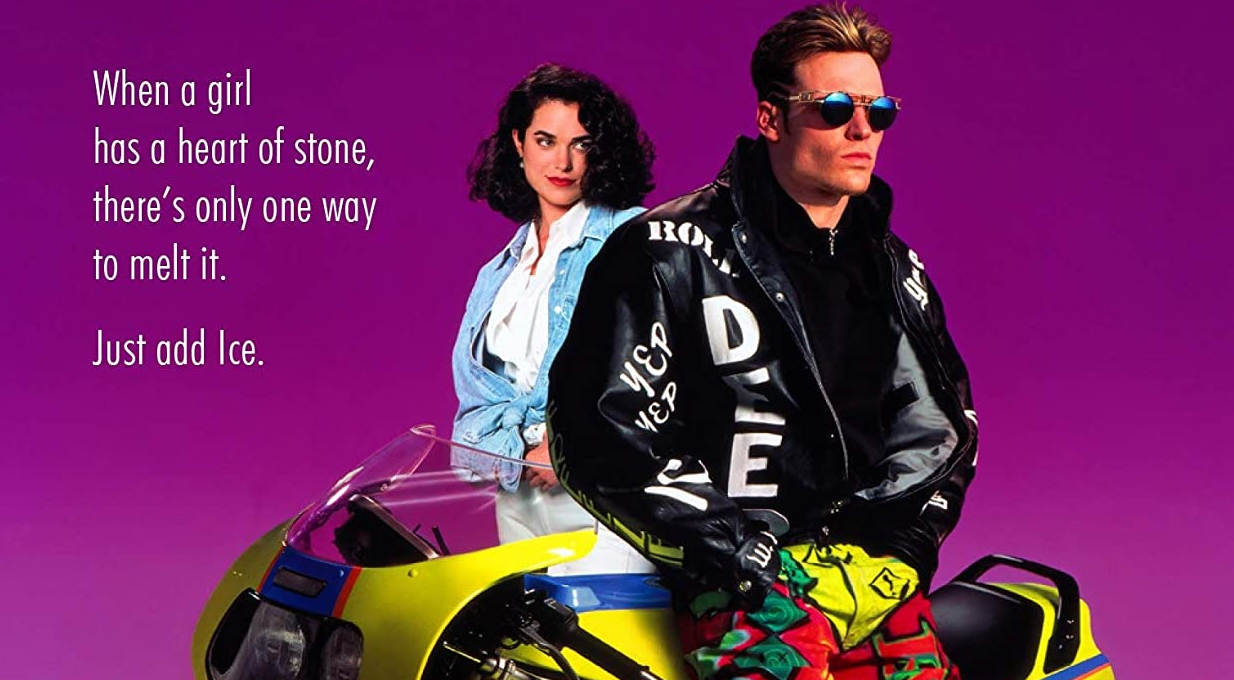 Rob Van Winkle aka Vanilla Ice debut feature Cool as Ice is about as early-1990’s as you can get.  Kino Lorber has done the Lord’s work by bring this to Blu-Ray.

A verse in rapdom that’s as notorious as any harsher verse that’s been spit into a mic.  Vanilla Ice was a Florida-based Rapper that for a moment in time became a Super Nova.  Multiple Platinum Single and Record.  World Tour.  Ninja Turtle Soundtrack.  And.  A movie.

Cool as Ice taken away from all the jokes one could make about the “Rap” Star is your standard teenagers getting involved with crime that’s could have starred Christian Slater (think more Gleaming the Cube than Pump up the Volume).  Though the film has a few secret weapons making it better than the standard early 90s Teen fare.

“Rap” “gunslinger” Johnny Van Owen (Vanilla Ice) and his crew Jazz (Deezer D), Princess (Allison Dean), and Sir D (Kevin Hicks) roam town to town looking for night clubs to perform at.  When Morrisey’s bike breaks down the crew have to settle in for a few days.  Of course, Johnny gets involved with Kathy (Kristin Minter who’s already involved with Nick (John Haymes Newton).  There’s trouble beyond just Nick and his buddies hating on Johnny.  Kristin’s dad and mom (played by Michael “Tremors” Gross and Candy “The Man Who Fell to Earth” Clark) are in some big trouble with some corrupt cops (Jack McGee and Sydney Lassick) from their pass.  Not to worry Johnny and his crew will save the day because… rap and love triumph over all!

Cheese?  For sure.  This is the kind of aged gouda that many will delight in.  As they should.  There’s something undeniably entertaining about how everyone commits to the seriousness of the piece.  There isn’t a wink or a nudge that would make one think they’re playing this “tongue in cheek”.  All the better for it.  The film once it gets into the plot mechanics of the genre part of the story really does mimic Gleaming the Cube in the way that it thrusts the kids into the middle of its crime plot.  Like the Christian Slater Skateboarding Epic Cool as Ice has the kids solve the problems in its third act.

The film is hugely aided by the keen eye of burgeoning cinematographer Janus Kaminski, who would in two years win an Academy Award for Best Cinematography for Schindler’s List.  Kaminski here creates a strange and wild visual palette that feels more Tony Scott circa 1991 than any teen movie.  One just needs to see his use of harsh lighting in the opening moments and the way he uses specific filters through out that give this an elevated sense of visual style.

The other secret weapon is the Iceman himself, Rob Van Winkle aka Vanilla Ice.  Say what you will about the Rapper know or even then… he’s got charisma in this role.  There’s something innately charming about him throughout the film.  There are moments that feel stiff but for most of the run time Van Winkle does what many other musicians have tried and failed at (though there are many others that have succeed far beyond him).  As Johnny he is at his best when he’s coupled with Minter’s Kathy.  They create some genuine chemistry that elevates their romance to better than average.  Though many will chuckle at the whole “falling in love in a construction site” montage.

Cool as Ice is surprising if taken as a deep-fried piece of midnight movie 90s nostalgia.  From that point of view it kicks ass.

This newly-recorded commentary track by historian Alexandra Heller-Nicholas and Joshua Nelson is an utter delight.  Those that have heard their commentary for Thursday will know what they’re in store for.  Thankfully, they say upfront that this is a “snark-free” commentary.  Details include Naomi Campbell’s cameo appearance and her guest vocals on the opening track, the MTV influence on films, the appearance of Bobbie Brown, the phenomenon of Ice Ice Baby and the album To the Extreme, the comparison of Elvis and Vanilla Ice (this was an interesting comparison in the way they were entry points for white community with Rap Culture), director David Kellog’s background in Playboy videos, music videos and his history with the movie (he disowned it), how Grunge (eg Nirvana, Pearl Jam) explosion around the time factored in, the Jim Carey parody, the Razzies and their irrelevance, the behind the scenes crew, the 1999 incident on MTV, the harrowing events in the aftermath of pop culture turning on him, the mystery of the truth of Vanilla Ice’s authenticity, the subject of authenticity, the work of Mickey Hess on Vanilla Ice’s career, the issues with the casting of Black Actors/Musician and their use, Kimberly Montain’s work on the film (and quotes from her book), the out of date nature of the film at the time’s release, Janus Kaminski’s standout cinematography, Kaminski’s work with Roger Corman and (of course) Spielberg, the career of Kristin Minter, Gwyneth Paltrow casting and her turning down the role (thanks to Bruce Paltrow), Heller-Nicholas’s hilarious discussing of Kristen Scott-Thomas vs Paltrow, the career of Michael Gross, the career of Candy Clark, Deezer D and his career post-Cool as Ice, and much more.  This is not only a fun track but has some great information beyond what I’ve described above.  Even if you’re not a fan of Cool as Ice still listen to the commentary.

Those looking for a blast of 90s nostalgia look no further than Cool as Ice.  Recommended (for those 90s kids especially those in dance teams… you know who you are!).