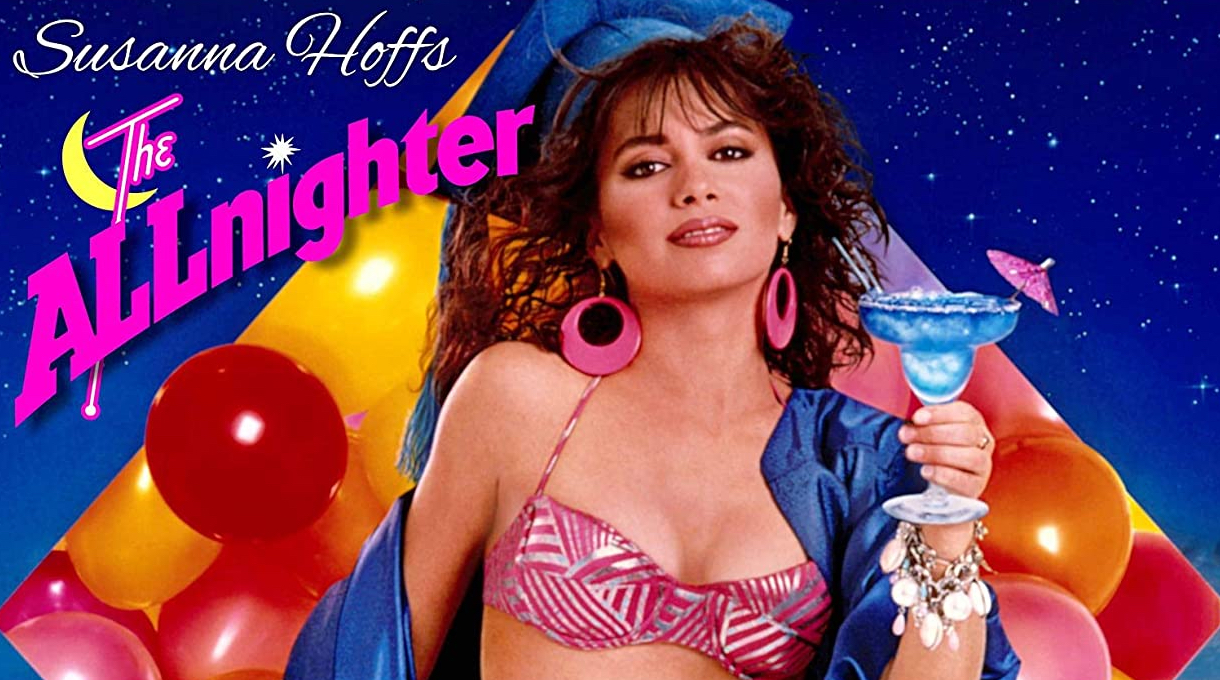 The 80s Frat House/College Comedy gets a flip with Tamar Simon Hoff’s The Allnighter.  Instead of a trio of boys trying to figure out how to score the day before their graduation, it’s a trio of girls.  They’re not looking to score though they’re looking for their next big move.

Molly (Hoffs), Gina (Joan Cusack), and Val (Dedee Pfeiffer) are set to graduate college from the fictional Pacifica University.  The night before their graduation they each respectively have goals in mind.  Val is to rendezvous with her fiancée, a douche bag stockbroker.  Gina is trying to finish her film school project.  Molly is looking for true love.  Before the end of the night, they’ll all be tested but don’t worry it all ends well.

Writer/Director Hoffs makes a “girls just wanna have fun” style comedy.  There are better versions of this type of film.  It helps that the trio Hoffs, Cusack, and Pfeiffer are all in top form.  Of course, Cusack steals the show as a filmmaker documenting the night.  Even this early in her career Cusack is pitch-perfect comedic assassin.

It’s Hoffs that’s stranded and it’s not because of her acting ability but rather the eye-rolling storyline her character has to endure.  The Valvictorian that doesn’t matter care about anything but “getting a man”. The problem is that both the supposed paramours are outright pricks.  One is your typical blonde hair blue-eyed surfing Lothario.  The other is a rock star aloof to her charms.  Watching Molly look for love with these two assholes is one of the more embarrassing aspects of the film.  Worst still, Molly doesn’t realize she’s better than these two and is about to have the world in front of her.

If you take it as it is The Allnighter, as an 80s fluffy comedy, it works.  But look any further and begins it falls apart.

Kino’s transfer for The Allnighter is as handsome and as sharp as they come out of the 80s Universal Vault.  The color reproduction is on point with the neon and pastels that fill the screen (it is a late 80s beach movie after all) come through without any issue or distortion.  Fans of the film will be duly impressed with the transfer provided by Universal and the care taken by Kino in bringing it to disc.

The first of two commentaries features Star Susanna Hoffs and Co-Writer/Director Tamar Simon Hoffs.  The Hoffs gives us a great commentary track discussing the production and details of the time.  Details include casting of Dedee Pfeiffer and Joan Cusack, the recently passed Freddie Elmes photographed the second unit, how the film and concept of a beach movie for Hoffs came together, how the film began as a High School film and changed to a College film, how Universal Home Video financed the film, the casting of Michael Ontkean, Hoffs going from Touring with the Bangles literally the same day going into rehearsal for the film, the ratings board issues they had, how their created and familial relationships work, which also leads to the number of questions that were raised about a mother/daughter working relationships, the stunt work in the film, the sex scenes in the film, the difficulty shooting the surfing scenes, and much more.  The Hoffs commentary is a great relaxed conversation between the two.

The second commentary is by Historians Alexandra Heller-Nicholas and Josh Nelson give an informative and fun commentary track about the film.  Details include where this lines up in the patheon of 60’s Rock Movies and 60’s Beach Movies, the influence of MTV on this film, how a film compares to a similar film Modern Girls, the creative relationship between the Hoffs, Susanna Hoff’s career in The Bangles, Manic Monday being written by Prince, the career (not just film career) and life of Tamar Simon Hoffs, the criticism of the Mother/Daughter relationship by journalists of the era (including Bryant Gumbel, which to hear is quite shocking), a comparison of Elaine May and at the time her “bomb” Ishtar (this reviewer and Heller-Nicholas think the movie is great), the bias of critics about female comedy directors, the mirror scene and how many people criticized it and attacked the Hoffs, Tamar Simon Hoffs’ short film Haircut, the Leonard Maltin scathing review, Joan Cusack in the film and her career at the time, the Ted Field cameo, AIDS and how it affected the Teen Sex Comedy, the female gaze in the film, and more. Heller-Nicholas and Nelson give us a commentary packed with great information, critical points of view, and personal anecdotes.

Price-Sulton’s No TV No Phone (4:38) – the music video directed by Simon Hoffs is your standard-issue music video circa 1987.  Dudes on the beach rocking out intercut with scenes from the film.  MAGIC.

The Allnighter is what you expect from an 80s PG-13 College Comedy.  Kino’s Extras and Transfer elevate this release.