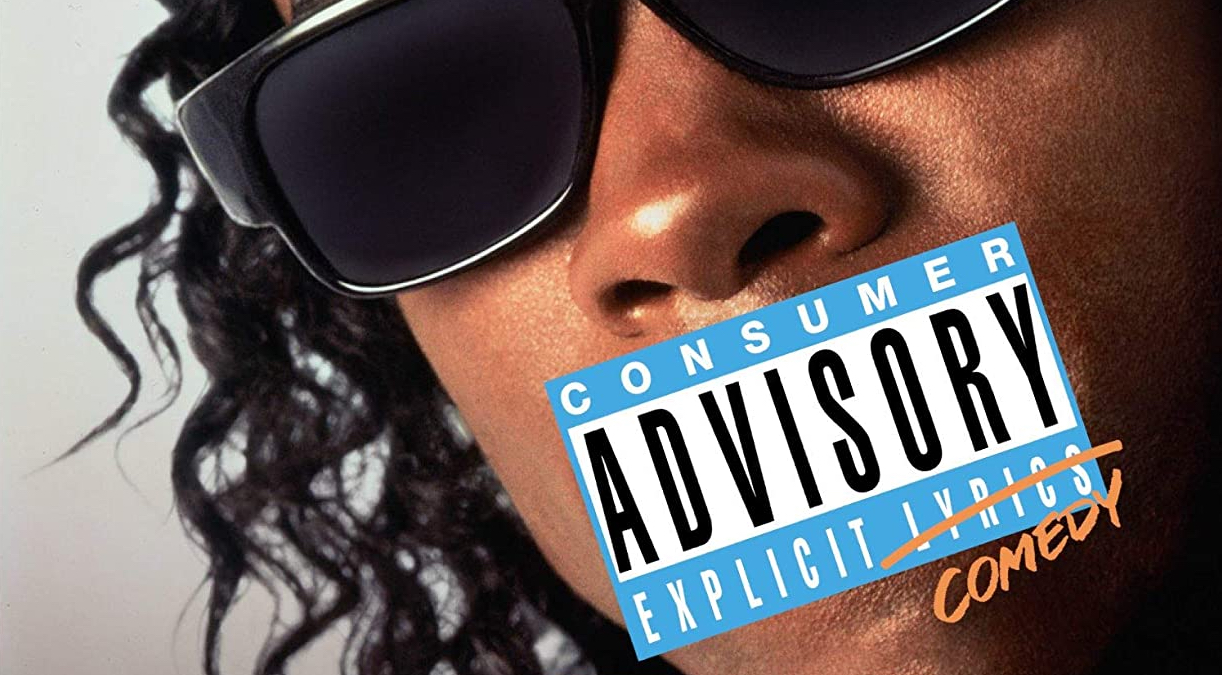 The key to any satire is the accuracy and loving detail that is put into the subject they are lampooning.  CB4 as it was when first released close to 30 years ago still stands as one of the great satires of the 90s as its account for detail still rings true today.

CB4 aka Cell Block 4 is the biggest Rap Group at the moment.  MC Gusto (Chris Rock), Dead Mike (Allen Payne), Stab Master Arson (Deezer D) make up CB4.  Like all musical groups of this magnitude, their life story must be documented.  A White (Chris Elliot) a documentarian follows the group as MC Gusto decides to tell the true-life account of the band that created such notorious hits as “Sweat from my Ball” and “Straight out of Locash”.  Not all is at appears as the real Gusto (Charlie Murphy) has escaped from prison looking for some vengeance and a cut of the money.

CB4 is as much a savage critique as it’s a love letter to the Rap Culture of the era.  No subject is left unturned from Political Censorship to authenticity, sexualization of women in rap, to the white appropriation of rap culture, to fame, to infamy, and more.  Director Tamra Davis working from a sharp script written by Rock, Nelson George, and Robert LoCash has created a film that is as fresh today as it was when released. They crafted an adroit film that locks into very specific details of Rap culture giving it a zeitgeist feel for any era, not just the mid-1990s.

At the center of the film is Chris Rock who has no qualms about not just sending up Rap culture but himself in the process.  As Albert aka MC Gusto, Rock creates a character and a performance not just an empty vessel for jokes.  The same goes for Payne as Dead Mike and Deezer D as Stab Master Arson.  They are both characters with arcs, albeit ones that may be clichéd at times, that allow the actors to fill in more than just visual sight comedy.

Though the secret weapon of CB4 is Charlie Murphy as the real Gusto.  The way that Murphy plays the role with a deadpan seriousness makes it all the more hilarious.  Murphy is all menace and violence as Gusto, almost as though he stepped out of an entirely different film.  CB4 is all the better for this kind of touch.

It should be noted that CB4 could be considered coarse and highly inappropriate in the current climate.  One should enter it with a certain amount of caution if easily offended.  Though this is what makes CB4 still ring true its bite is still very present and maybe even more so now thirty years later.  Much like NWA’s Straight Out of Compton which feels as dangerous as the day it was released, CB4 remains as fresh and funny as the day it was released.

Universal has provided Kino Lorber with a handsome hi-def transfer for this release.  The image is sharp and accurate color reproduction.  The film looks as good it did on release back in 1993.

The newly recorded commentary track by historians Heller-Nicholas and Nelson is an informative deep dive into the comedy.  Much like their commentary for the very different Cool as Ice they bring a lot of fun and interesting details about the production.  Details include their upfront comments about their both being white and Australian, this leads to a discussion about authenticity in the film and it being one of its primary themes, the films critique of culture, rap, commercialization of race and class, how the film is and isn’t a mockumentary, the mockumentary as a subgenre/filmmaking framing device, Nelson George’s career including books about working in Hollywood, his role in Spike Lee’s career, his own directorial career, the work that George and Rock faced at the time and working in a studio system that was very white, the work of director Tamra Davis in the film and also her music video career, her documentary film career, her TV directing career, and of her filmography, the career and work of the great-great Khandi Alexander (including some truly great pieces about her career that many will not know), the trouble that Davis had during her next project (Bad Girls) which she was fired from, the other various director that were attached and the struggles that Rock and George had with hiring Davis and why they wanted her, the work and career of Chris Rock and how his rejection and leaving SNL and being hired on In Living Color in the 90s, and much more.  The track is a great wealth of knowledge about not only the film and its production but the themes and historical context.

Straight Outta Locash (17:56) – is an all-new interview with co-writer Nelson George. George begins with a recounting of how the film begins production in the aftermath of the 1992 LA Uprisings.  Details include George starting in music journalism, how he invested in She’s Gotta Have It, producing Def by Temptation, co-writing Strictly Business, meeting Chris Rock and how they began to develop CB4 out of a concept of “a Rap version of This is Spinal Tap”, how Ben Stiller was initially attached as director which his dropping out lead to Davis being hired, where they filmed the production (Western Ave that many Angelinos will be familiar with), the concept and beginning of the “Studio Gangsta” and how that was written into the script, the work of Danny-O/Bill Stephanie and how they produced a lot of the parodies, the Cop Killer album Ice-T releases and how it affected marketing pushes, the other various parodies beside the CB4 tracks and how they were developed, the casting of Charlie Murphy (which includes a wild story that this reviewer will not ruin), the development of the women of the film, the work of Phil Hartman, Art Evans, and Will E Pugh, an alternate ending that did not work and reshooting the ending, and much more.

Street Cred (8:53) – is an all-new interview with director Tamra Davis.  Davis discusses how she began in Hollywood starting with Music Video Director, which leads to more work as a Music Video Director (including NWA, Tone Loc, Bette Middler, Cher, among others).  Details include making 150 videos over her career, what she learned shooting that many videos, how she filmed a video for Chris Rock that lead to eventually teaming on CB4, the production and improvision worked in the film, the women of CB4, and much more.

CB4 is one of the best underseen comedies of the 1990s.  Kino Lorber has filled it with some great extras.  HIGHEST POSSIBLE RECOMMENDATIONS!!!

Kino Lorber’s Blu-Ray of CB4 is out June 22nd