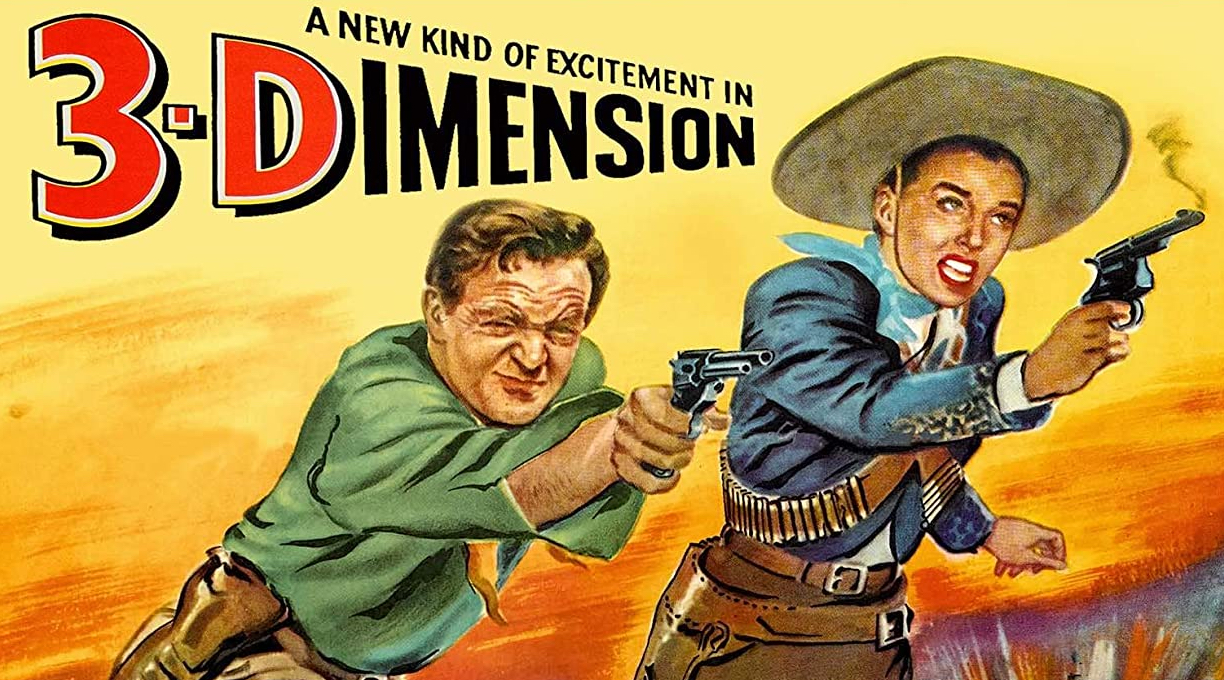 The long-forgotten Budd Boetticher 3D Western Wings of the Hawk comes with fully restored 3D thanks to Kino Lorber.

It was Indicator Films (the UK boutique label) and their box Five Tall Tales that introduced me to the films of Budd Boetticher.  As it did Wings of the Hawk has been high on my list to watch.  This South of the Border proto-western starring Van Heflin is definitely a can’t miss for Western Fans and Boetticher fans alike.

Set in 1910 just south of the Mexican border a prospectors Irish Gallagher (Heflin) and Marco (Mario Siletti) have struck gold.  They’re doing right by paying their workers and the duty taxes necessary.  The Federales led by Colonel Paco Ruiz (George Dolenz) don’t see it that way.  They feel they should be paid 50% of the find to help quell the Rebel activity.  This leads to Marco being killed and Irish on the run.  Irish finds himself in the company and saved by the Rebels led by the beautiful and strong-willed Raquel (Julie Adams).  No sooner than being saved is Irish embroiled in the drama and life or death fight for freedom with the Rebels.

Boetticher’s film is … progressive for the time.  Many of the lead roles filled by Latino actors (the most notable being Pedro Gonzalez credited as Pedro Gonzalez Gonzalez from Rio Bravo and many other classic films) with the exception of the lead roles like Raquel or Colonel Ruiz.  Heflin does eventually help lead the rebellion but at least does so with a surprising turn of events by Raquel.  The film does excel at making these melodramatic turn of events somehow feasible and quite enjoyable.

Boetticher’s eye for composition and action does well in 3D.  The film’s 3D is not designed to have things thrown at the screen.  Rather the director has chosen a depth of field instead.  The result is a more modern approach to the 3D that will have many delighted they’ve taken a chance on the film.  Wings of the Hawk at its core is a rousing adventure of rebellion and fight for freedom.

This Newly Restored in 3-D by 3-D Film Archive – From 2K Scan of the Left & Right Eye Ips is beautifully restored.  As mentioned in the review.  The 3D has a gorgeous depth of field.  Restored by the fine folks at the 3D Film Archive the image is always consistently rendered with no Ghosting effects present.  This is a minor miracle as well over 25% of the film is shot at night (probably night for day).  The darker image isn’t blown out for the sake of the 3D, they have managed to find a great middle-ground to allow for the darker image but retain the 3D’s depth quality.  All around a great transfer for anyone with a halfway decent 3D Monitor.

The 2D image also restored by the 3D Film Archive is a healthy but very grainy image.  The healthy amount of grain structure on the image is not a problem with the transfer but goes with how the film was shot.

I do not normally make a note of the audio but would suggest using the 5.1 Surround (2020 Compressed 3.0 Midnight Movie Mix) rather than the 3.0 Original 1953 High Dynamic Range Theatrical Mix.  Though both are beautiful the 5.1 upmix I felt a more satisfying experience.

The full Audio Commentary by historian Jeremy Arnold is a wealth of information.  The historian was a friend of Boetticher until his death in 2001.  This gives the commentary a personal touch.  Details given include Boetticher did not have a fondness for his Universal films, 9 films over a four year period before going to Columbia and working with Randolph Scott to much acclaim, the director’s dislike of the gimmick of 3D, how the director though disliked the format still shot for depth in 3D beautifully, the director’s life pre-Film Director (including a stint as a Bull Fighter), the director’s career and beginnings in Hollywood, the life and times of Pedro Gonzalez Gonzalez, the origins of the story from Novelist Gerald Drayson Adams, the career and life of Julie Adams, the career of Van Heflin, Boeetticher’s directorial style and interests, the transition to widescreen in this movie and Universal in general, the film’s release, and more.

20-Minute Audio Commentary by 3-D Expert Mike Ballew (24:38) – Ballew gives us a technical production-based micro commentary.  There is a bit of overlap from Arnold but the information that Ballew gives us is well worth the journey.  Interesting pieces of information include the frenzy of 3D, color film stock depletion, a great list of injury report (including a report of future Academy Award nominee, at the time a stunt man, Richard Farnsworth), the modern stereo soundtrack, its loss, and rediscovery, how Wings of the Hawk was recorded in stereo, Natural Vision 3D Camera Rigs which bore several different 3D Camera Rigs including a Universal created rig, this caused Natural Vision to sue, and more.  Ballew’s commentary is a great deep dive into the 3D production and some very fun technical pieces of information of how at the time the 3D rigs were used to accomplish the effect.  The commentary runs with a single photo from the film.

Woody Woodpecker: Hypnotic Hick 2D/3D (6:32) – Woody is conscripted as a Bail Bondsman to capture Vulture.  Woody figures that hypnotism will help him get the Vulture back to collect the bond.  Hijinks ensue.  This short definitely benefits from the 3D (and the restoration done on said format).  If one has the ability to view this with a capable monitor this is a delightfully witty experience.

Rounding out the special features is the trailer (2:12)

For anyone that’s a 3D Fanatic, like this review, this is an instant purchase.  Recommended!!!

Kino Lorber’s 3D Blu-Ray for Wings of the Hawk is out on February 9th.