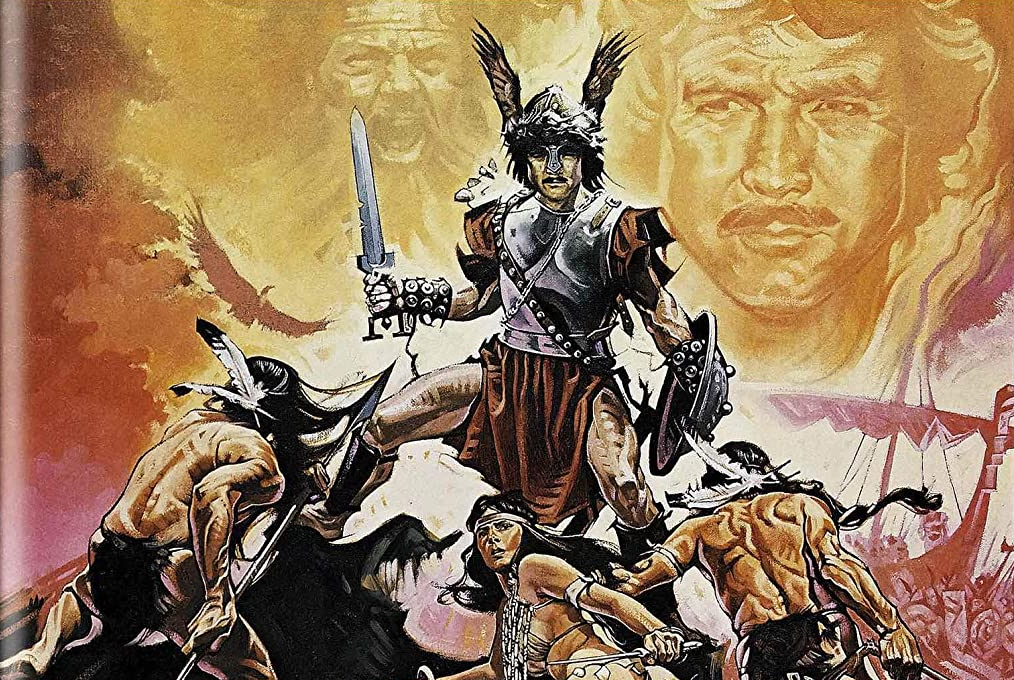 Scorpion Releasing never disappoints. The long-forgotten action-adventure The Norseman is the kind of cult oddity that needs to be seen to be believed.

Only in the late 1970s into the 1980s could you get a Viking movie starring Lee Majors, Cornel Wilde, Mel Ferrer, and Jack Elam (as a Viking wizard no less).  Filmed on location in Florida and 75% of the film shot in slow motion.

A Viking Prince recounts the adventure he went on with his older brother Thorvald (Lee Majors) to find their father King Eurich (Ferrer).  Thorvald brings a group of men that include scruffy vet Ragnar (Wilde), Death Dreamer (Elam in all his Elam-glory), the mute Rolf (Christopher Connelly), slave Thrall (NFL Great Deacon Jones), and others.  Once they’ve gotten to “Newfoundland” they begin their rescue mission of the capture King and his men.  Thorvald, wearing a Zorro-style mask, dogged in his hunt for his father eventually finds him along with the love of a Native American Woman (Susie Coelho).  All ending in a chase and battle to the coast to live to fight another day.

There are good movies.  There are cult movies.  There are bad cult movies.  Then there’s The Norseman.  Director Charles B. Pierce makes a film that seems to have been lengthened by twenty minutes by all of the use of Slow Motion during the action scenes.  Bloodless set pieces, blatant recycled sound FX work, and no work to make the film look like anything but being shot on location in the Florida Everglades creates a hypnotic vibe that is at once terrible and genius.

One cannot take their eyes of The Norseman and inability to do anything right but so convinced it is making something mythic.  Majors seems to have stepped off the set of The Six Million Dollar Man and onto The Norseman.  The actor is miscast in the role, as are all the actors, but this leads to an almost compulsively watchable film.

This sums up The Norseman perfectly.  Compulsively watchable but terrible at every turn.  It’s everyone’s commitment to what they thought was going to be a legendary epic action-adventure that makes this such an oddity and one that cult film fans will want to search out.

The Norseman has been beautifully transferred to Blu-Ray thanks to Scorpion Releasing.  The transfer is sharp, colorful and grain structure remains intact.

The Norseman is for Cult Film Fans.  Recommended!!!