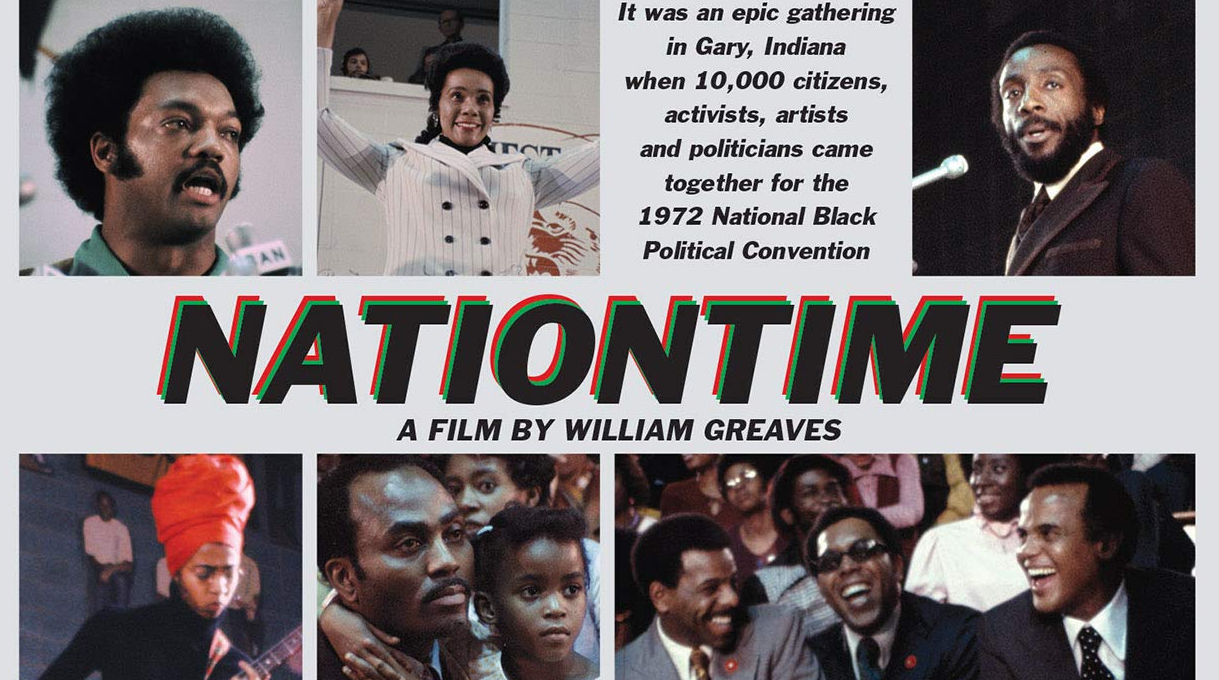 Director William Greaves’ Nationtime is an important historical document.  Vital, alive, powerful, and as important currently as it was back in 1972.  Kino Lorber has released a beautiful Blu-Ray with a 4K restoration and extras.

Nationtime is a living vital piece of verité cinema.  Not a relic of a bygone era.  William Greaves’ documentary of the first (and unfortunately only) National Black Political Convention deals with many of the same issues that are facing Black Americans today.  What Greaves film captures so urgently is the power in which the political and cultural figures at the time understood, even 50-years later, what was needed to move forward.

Initially released in a truncated 58-minute form this is the full 80-minute documentary that Greaves had created.  What was cut was some of what TV censors thought was “militant” aspects of the film.  The restored cut shows a focused group of passionate, intelligent, strong Men and Women of Color discussing the ills of the era.  Those ills being basically the same ones that People of Color are still dealing with today.

Greaves is able to create a film and milieu that is full of energy and promise one whereby the end of the film an audience would think progress is possible.  Not just filled with political trumping speeches Nationtime features musical interludes by Isaac Hayes and others, Poetry by Amiri Barka (read by Barka), Langston Hughes read by Harry Belafonte and narrated by Sidney Poitier.

Nationtime is a piece of cinema that needs to be rediscovered by all.

Kino Lorber presents Nationtime in a brand new 4K restoration.  Beautifully and meticulously restored and color corrected is nothing short of a miracle.  These are the types of Documentaries and true artistically made films that need to be preserved and are by Kino Lorber.  The image is the type of verité style 16mm work that shines on Blu-Ray.  The grain structure, sharpness, and color are all warmly inviting and perfectly represents the urgency that the film brings.

The audio commentary by David Greaves is a thoughtful recollection of the time at this historic event.  Greaves was a camera person at the event that William, his father had documented, was only 23 at the time.  Greaves discusses the context of the National Black Political Convention, and in this sort of commentary, the discussion of what’s happening on screen is vital.  Details include the lack of police, Gary Indiana, the actual location, the seriousness of the proceedings, the various political and cultural figures that appear, how his father approached the filming of the event, the lack of another National Black Political Convention, how his father got people like Harry Belafonte, Sydney Poitier on the project, editing chronologically (rather than for effect), Jesse Jackson electrifying speech to the delegates of the convention, the filming that had to lead to a whole new color correction, his father’s approach directing and documentary, the behind the scenes of post-production, his thoughts on reparations, Harry Belafonte helped beyond his presence,  and so much more.  Greaves gives us an informative and very detailed look at a very important piece of filmmaking.

Interview Louise Greaves (14:39) – Filmmaker Louise Greaves discusses her life and work with William Greaves.  Beginning with how they met in Canada as Greaves was introducing Method Acting to Canadian actors.  She discusses her life with an independent filmmaker, how she became involved with the production, how he loved Editing and was a songwriter and musician.    Greave is an informative delight recounting working and life with Greaves.

Interview with David Greaves (15:29) – Editor and Camera Operator David Greaves discusses the more technical aspects of making Nationtime with his father.  An extension of the commentary he recorded though Greaves discusses his father’s time in Canada and how he made his way to Editor, how his father was initially an actor, eventually became a Director, how he came onto productions after school, how editing helped him become a better camera person, the truly complex sound work that they faced on Nationtime with no sync sound, and much more.  Greaves is great at giving anecdotes about his father, the time, and also the filming of Nationtime.

Rounding out the special features is the Theatrical Trailer (1:57)

I think it goes without saying that Nationtime gets a HIGHEST POSSIBLE RECOMMENDATIONS!!!

Kino Lorber’s Blu-Ray of Nationtime is out now