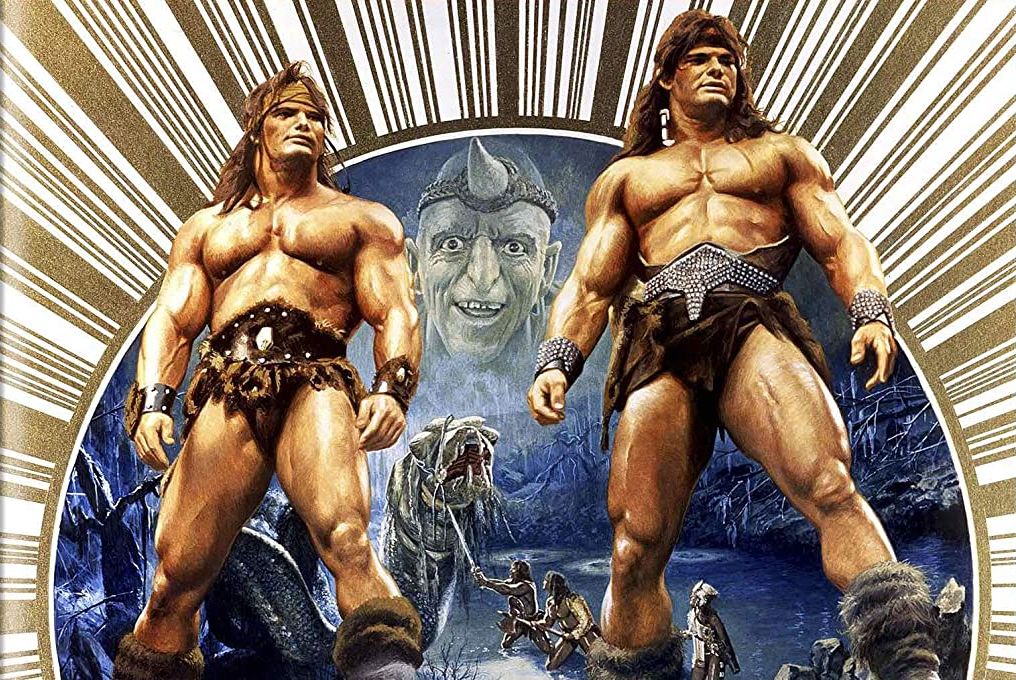 The glorious goofiness that is the Barbarian brothers staring in The Barbarians makes its Blu-Ray Debut thanks to Scorpion Releasing brandishing an updated 2K Transfer and sound.

Many will say Ruggero Deodato’s The Barbarians is a terrible movie. They would be wrong.  Though goofy and at times strange deluges into camp aside from the sword and sorcery, the film is more intentionally fun than most of its contemporaries.

A troupe of actors in the dark ages holds the key to all the power in the land.  A magical … belly button Ruby.  Which the evil lord Kadar (Richard Lynch) wants both the Ruby and the woman that holds it in her belly button Canary (Virginia Bryant).  The only people that can help Canary is a pair of twins that bit off a few of Kadar’s fingers; Kutcheck (Peter Paul) and Gore (David Paul).  Kutcheck and Gore with the help of Kara (Eva LaRue) are sent on a quest to retrieve the Ruby and save Canary.

The plot is much more complicated, unnecessarily so than the above synopsis.  The film takes liberally from Conan: The Barbarian, Krull, Excalibur, Conquest, and just about every fantasy movie ever produced or screenwriter James R. Silke could see.  There is no mistaking that this is a late 1980’s Cannon production.  That isn’t a knock but a badge of honor.

The film’s charm is in its willingness to throw everything at the “filmic wall” to see what sticks.  The Barbarian brothers (aka the Paul brothers) have enough weird energy and charisma to pull off the film.  Their infectious enthusiasm feels like they can’t believe they’re in a film let alone the leads.  Their belief in the material and never playing it other than straight is one of the unexpected advantages the film has.

The everything and the kitchen sink approach also applies to the cameo by Italian Great George Eastman and the casting of Villain Cliché extraordinaire Richard Lynch.  One wishes the seven-foot-tall Eastman had a larger part.  Though many fans of Hands of Steel will cackle in delight at what they have him do.  Lynch brings his usual menacing energy.  Though here it is especially odd as he plays both menace and some sort of obsessive love.

It is all pretty predictable but it is done with the sort of strange nervy energy that so many Italian genre films do.  Add into the mix a truly great Pino Donaggio score and you have an 80’s Cult Fantasy Gem that can’t be missed.

Scorpion Releasing has outdone themselves with this beautiful new 2K Transfer. Having seen the previous DVD Edition (it was a terrible washed-out transfer on a single disc double feature), this is a revelation.  On Blu-Ray the film looks colorful and sharp with deep blacks/contrast levels that were never apparent on the DVD transfer.

The audio commentary by Troy Howarth and Nathaniel Thompson is an informative delight.  Howarth and Thompson discuss the Italian Genre Films industry, Cannon Films, and its filmography at the time (including hilariously Going Bananas, a film that needs to be seen to believe exists), the influence of Post-Apocalyptic films, Sword and Sorcery films, Lady Hawk, how director Ruggero Deodato was a replacement, the Barbarian twins aka David and Peter Paul, Golan and Globus, the George Eastman Cameo, the very funny Creature FX work here, the work of Sheeba Alahani (or the lack thereof after The Barbarians), Deodato and his Contemporaries work during this time, and the cult of the Barbarians Brothers and the movie itself, the work of Eva LaRue, and much more.  The second half of the commentary is a little more sparse than the first half but does not take away from this very fun and informative commentary track.

For anyone that loves Cannon Films or Sword and Sorcery films, this is an 80s goofy delight with restored picture and sound.  Recommended!!!