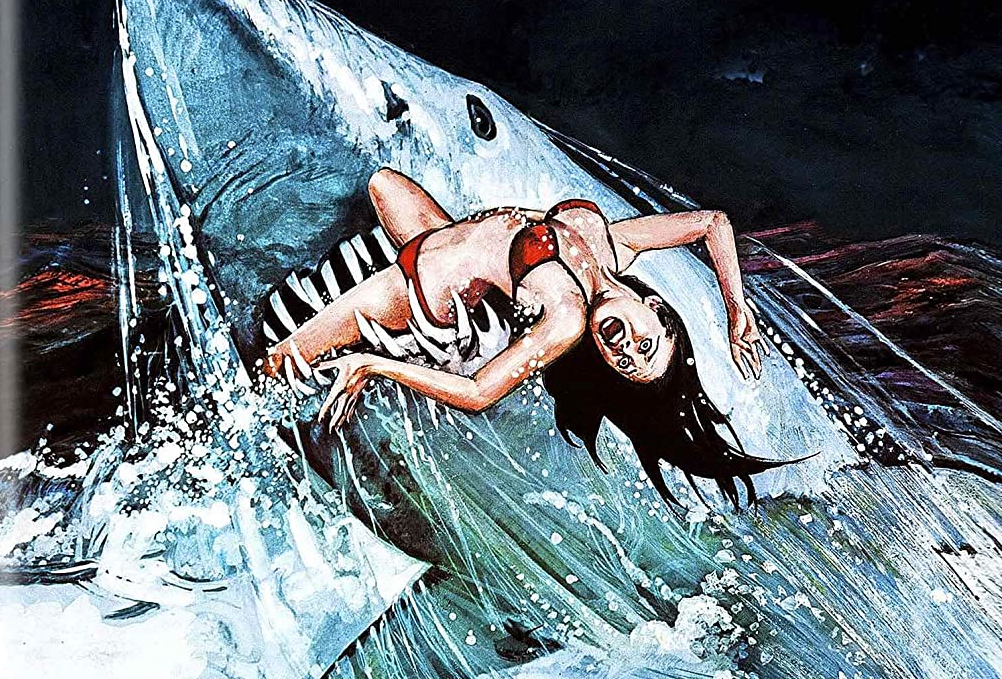 What makes Tintorera such a doozy of a film is that it not only melds the killer shark genre with the sex romp of the 70s… it does so with surprising depth.

Steven (Hugo Stiglitz) is on vacation in southern Mexico living up the cad upon town circa 1977.  He woos Patricia (Fiona Lewis) but quickly tosses her aside for the literal, sharks.  It’s when he meets Miguel (Andrés García) who Patricia sleeps with to make Steven jealous, though it has the wrong effect.  Steven and Miguel find a kinship between one another.  They begin to woo ladies, party, and of course, Miguel teaches him to hunt Sharks.  At this point, the men begin a relationship with Gabriella (Susan George).  Before one can think that everything is going to be is good old-fashioned drama the shark reappears.

One of the wild aspects of the film is just how progressive the film is with its sex, nudity, and the empowerment of women.  One would think with as much sex and female nudity that the film would have an exploitative twinge.  It does not, the film manages to empower the women with their own agency within relationships.  Before one thinks that nudity is one-sided, there is enough male nudity between Stiglitz and García.  Not just bare ass thought.  We’re talking full-on Harvey Keitel nudity.

One of the most troubling aspects of the film is the most thrilling.  The shark attacks and the shark/underwater footage is amazing.  With a caveat… it features some very unsavory animal treatment. Specifically, the on-screen killing of Sharks, Manta Rays, and other fish.  If any of this kind of cruel treatment is too much for you, please know this footage features heavily into the plot.

Tintorera is definitely not for everyone.  Those that it’s for it’s a wild gem of a movie.  One that gives you more complexities than your average exploitation picture.

For the most part transfer is gorgeous. Scorpion has done all they’ve could to make this film look gorgeous and it does most of the time.  The image is overall handsomely produced.

The newly recorded commentary track by historians Troy Howarth and Rob Barnett.  Staring with a hilarious comment about Tintorera and Penthouse, Ho\warth and Barnett have a great time discussing this wild film. Details include the creation of Hemdale, the origins of the project as a Book (only in the Spanish language), the work of director René Cardona Jr, the work of cinematographer Ramon Bravo started with Jacques Cousteau, a fun fact about his work in Zombi 2, discussions of Hugo Stiglitz in the film and his career, discussion of Fiona Lewis in the role and in her career, the possibility of different dubs of the film, the complex sexual politics of the film, the shark attacks (and how they were filmed), the various versions of the film (as this is one of the shorter versions), how various versions of films and how tighter edits are better than longer edits, the role of Susan George, the unfortunate animal issues that come up in the filming (which was the norm at the time), discussion of an alternate much more clear cut ending, and much more.  Note there is an of open-air and silence in the last third of the film.  Howarth and Barnett do a great job of showing just how Tintorera is a bit more elevated than what you may first think of this type of genre material.  The duo does so with an entertaining back and forth.

Tintorera is definitely a recommend BUT is not for everyone because of all the animal cruelty.

Scorpion Releasing’s Blu-Ray of Tintorera is out January 5th