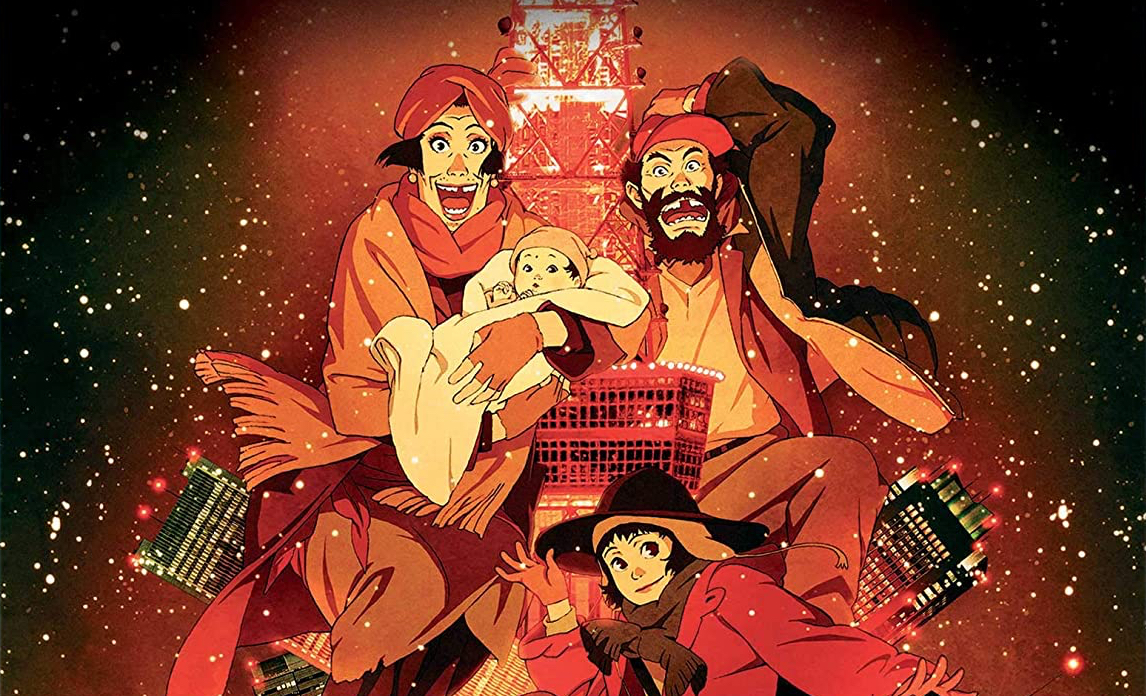 The further we get away from the work of Satoshi Kon the more we begin to realize how special his filmography is.  Adapting the story that was the basis of John Ford’s Three Godfathers. Kon has updated this yuletide-season adventure it for modern times and concerns.  The results are a film that is both socially relevant, heartfelt, and a bit magical.

On Christmas Eve three homeless, Gin, Hana, and Miyuki find an abandoned newborn in the trash.  Hana not wanting to give the newborn, who she’s has named Kiyoko, to the police fearing the baby be put into foster care.  The three set off to find Kiyoko’s parents and why she was abandoned. Along the way Gin, Hana, and Miyuki find out about each other and the lies, secrets, and histories of one another.  Can they find Kiyoko’s parents?

Writer/Director Satoshi Kon’s second film is as masterful a character study as his first two films (Perfect Blue and Millennium Actress).  Tokyo Godfathers is an adventure story but one with a huge streak of socially conscious dramaturgy that never feels preachy.  The three titled “godfathers” are each in their way broken but broken in the way that we rarely see humans on screen, let alone in an animated feature.  Gin is an alcoholic that constantly lies to hide from his truth.  Hana a transgender woman, who hides from her own pain.  Miyuki angered and enraged, hides from the fact she is a scared teen.  Kon allows each of them to make their own mistakes. The characters guiding the narrative through their follies, some with real horrifying consequences.

Tokyo Godfathers though socially-minded is first and foremost an adventure film and that it excels at.  Kon has designed unique action set pieces that will delight.  The director’s use of character, geography, and story together to push an action scene forward is as good as any of the late director’s live-action peers.  The final twenty-minute chase is one of the very best chases of the 2000s.

Seventeen years later Tokyo Godfather stands uniquely as a film that has gotten better with age with its message and its attitudes towards so many issues.  Rather than make a polemic stand, Kon creates a truly great unexpected Christmas movie.  One that gives an intelligent, oftentimes funny, and always humane voice to many who do not have a voice.

This Newly Remastered Transfer Based On 4K Scan of Tokyo Godfather is night and day different than it’s DVD predecessor. Having owned the early era DVD it does not hold up to modern standards.  The new Blu-Ray is nothing short of spectacular. This version reflects more of was projected back in 2003 (which I was lucky enough to see in its limited run).  The film is positively gorgeous with Kon and his animation team working in an almost Chiaroscuro color scheme.  Something that the Blu-Ray’s transfer only enhances.

The special features include:

Introduction by K.F. Watanabe – is a 2-minute introduction by the Deputy Director of Film Japan Society (New York City).  Watanabe does a great job of giving you context for where the film lined up Kon’s filmography, what makes it so special, and Kon’s ability for complex characters we empathize with. (English)

The Making of Tokyo Godfathers – is a 22-minute behind the scenes documentary made for Japanese television.  The featurette does a great job of giving you a glimpse of what the film is about, how it was created, and best of all a look into the mind of Satoshi Kon via interviews the director conducts throughout the featurette with actors and various team members.  There is plenty of B-Roll footage showing the actors recording together, the animator’s animating, and much more. (Japanese with English Subtitles)

The Process of Animation – is a 14-minute featurette that looks at the how they made the film with video reference, Storyboarding, pre-Animatic era filmed storyboards, Key-Frame Animation, multi-layer cell animation, cast recording.  An interesting look at how the film was put together especially with footage of director Kon playing the Hana part. (Japanese with English Subtitles)

The unexpected Tours – is a 26-minute featurette less glossy making-of than the The Making of Tokyo Godfather.  Using interviews, imagery form the film, behind the scenes photographs, behind the scenes videos, and other material to build this featurette on the various aspects of the film; story, visuals, characters, animation, sound, and premiere.  This is a much more technical “nuts and bolts” approach to how the film was put together.  (Japanese with English Subtitles)

Art Gallery – is a 5-minute visual gallery.  Rather than it being stills, the gallery is guided through shot on video through various pieces of production art.  You can pause the video but it is not your traditional still gallery.

Mixing for Surround Sound – is a 7-minute featurette about composer by Keiichi Suzuki.  The title is a bit misleading but still is a great look at not only the score but the source music.  (Japanese with English Subtitles)

An Interview with Shakina Nayfack – is an 8-minute interview with a look at the film with Comedian voice actress Shakina Nayfack.  It’s a great look and point of view from a Trans-Woman and the new English language dub, which she is a part of.  If you want to complain about the new dub, watch this interview and it should give you ALL the context you need why the new English language dub was done.

Ohayo – Short Film By Satoshi Kon – is not really a short film but a 75-second bumper for what looks like NHK News (NHK is a Japanese Television Network).  All the same, it’s a beautiful and stylish look at what getting up in the morning feels like.

Making of Ohayo – is a 4-minute making-of to the 1-minute short film.  It is a great look at Kon’s process in making his first and only short film.

Rounding out the features are two 65-second Trailers for the film.  One in Japanese and the other in English.

Shout Factory via their GKIDS label continues to treat Satoshi Kon’s work with the respect and reverence it deserves.  Tokyo Godfathers comes loaded with great special features, an amazing new 4K Transfer, and even a new Dub.  One hopes they will be able to get the rights to Kon’s masterwork; Paprika.  Completing the important preservation, they are doing with one of Cinema’s overlooked Geniuses.  HIGHEST POSSIBLE RECOMMENDATIONS!!!!