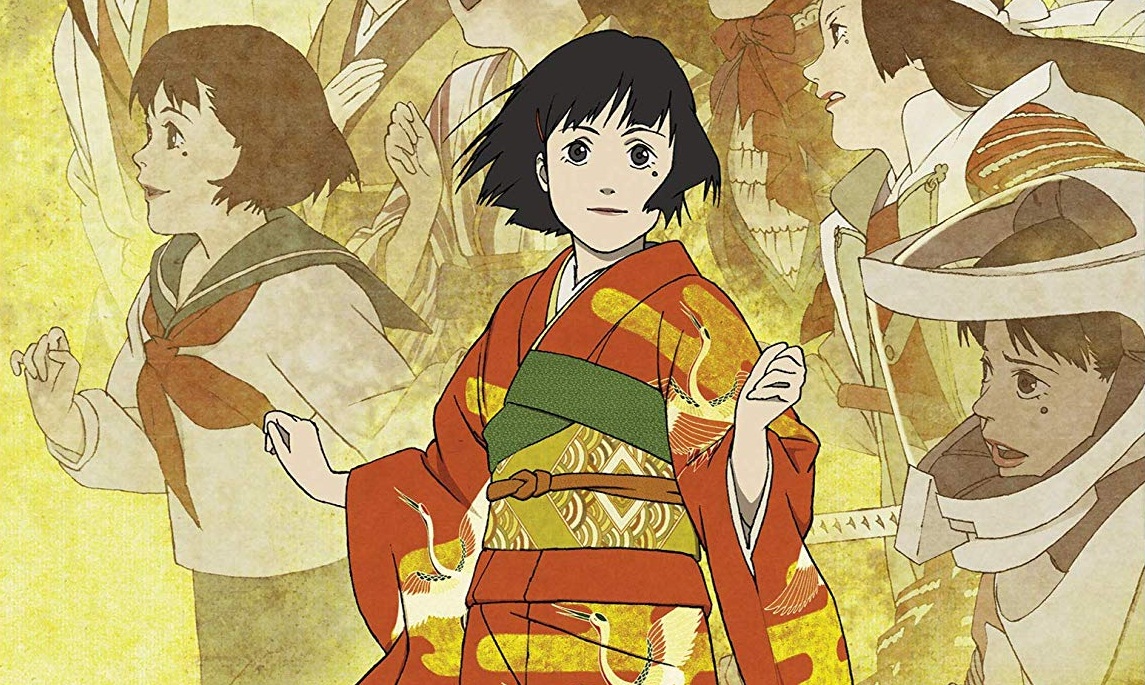 Shout Factory continues their release of Satoshi Kon’s amazing filmography with the US Blu-Ray premiere of one of the writer/director’s great triumphs; Millennium Actress.

The late filmmaker Satoshi Kon didn’t just make “animated films” he made films that used animation to break ground and tell stories that could never be told in live-action.  Millennium Actress uses animation (a tool NOT a genre of filmmaking) to create a film that could only be told with animation.

Celebrity Interviewer Genya Tachibana gets the greatest of “gets”; an interview with elusive and private acting legend Chiyoko Fujiwara.  With his cameraman in tow, Genya drives to the isolated home that Chiyoko finds herself living in.  As Chiyoko begins to tell her story both Genya and Kyoji (his cameraman) begin to experience life both real and filmic with the actress.  The lines of reality are blurred as the mystery surrounding who could be the love of Chiyoko’s life begins to unravel.

It is still a huge loss to the film community that Satoshi Kon passed away so early in his life, one that many can still feel the reverberations from.  The director’s use of the Animation Format within Millennium Actress (and all of his projects) shows how great it can be to tell specific stories without need to worry about a budget.

The film skips from reality to the fantasy of Chiyoko’s films without much of a signal.  One minute the film is recounting Chiyoko’s leaving a lover, the next she is the midst of a huge samurai battle.  Somehow without queues or markers, Kon’s never feels confusing though it does feel overwhelming.  Though that is the point, Kon’s narrative as he designed it is meant to be an emotional rollercoaster for Chiyoko and the audience.  The unlocking of these past memories flood her with confusion and how Kon realizes this within the film is by mixing film narrative and personal narrative together.

The result is a brilliant and emotionally devastating portrait about why endings matter and why artistic expression matters.  Even in as special a filmography as Satoshi Kon’s Millennium Actress stands above and beyond.  Millennium Actress isn’t just a must-see for Animation Fans but all Film Fans.

Those that have had the previous editions of Millennium Actress will know like Perfect Blue, the film was made-for-TV and thus its resolution was for TV (480p).  Shout Factory, like in the case with Perfect Blue, was given a restored HD Transfer.  The results are as stunning as the previous release.  Shout Factory has been given this remaster and they have taken time and care to produce the disc. The film looks beautiful in a way it hasn’t before on home video. Fans of the film will be amazed at how good it looks.

Interview with Producer Masao Mariyama is a 33-minute Interview.  Question prompts Mariyama’s answers to various questions like how the project came to fruition, how Kon was to work with, and the general discussion of producing the film.

Interview with Producer Taro Maki is an 8-minute interview.  Question prompts Maki’s answers to various questions like how the project came to fruition, how Kon was to work with, and the general discussion of producing the film.  Much of the same ground is covered in the much more in-depth interview with Mariyama.

Millennium Actress is a classic and deserves to be in everyone’s collection.  Highest Possible Recommendations!!!