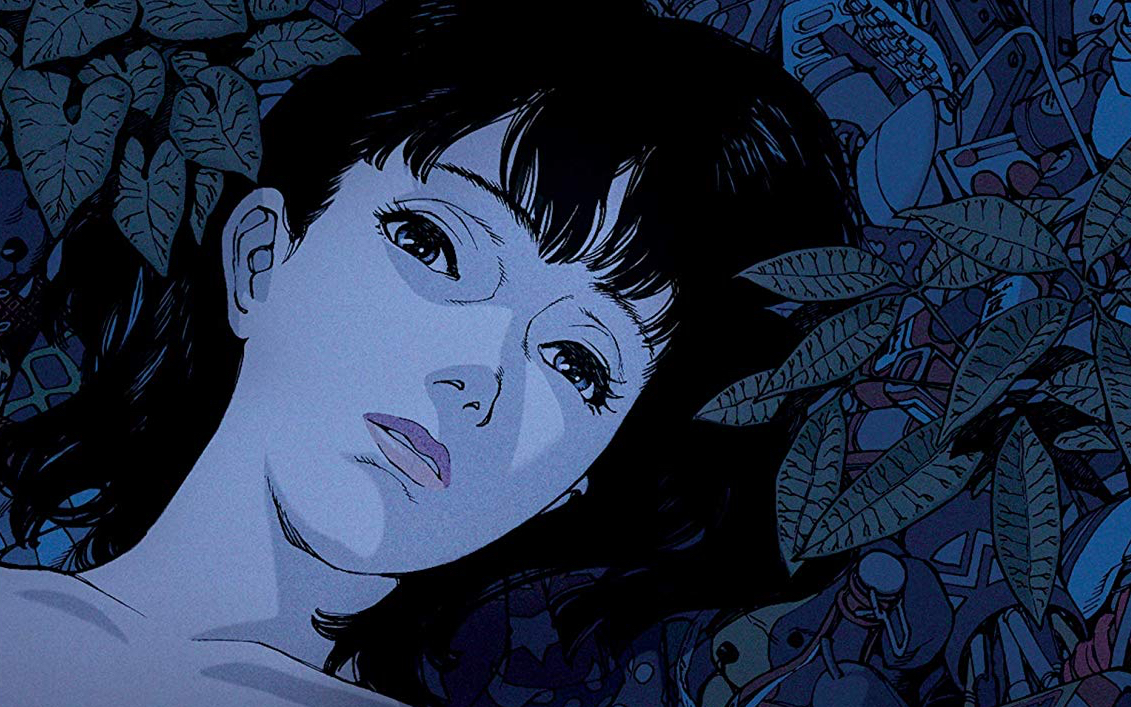 Adam takes a look at Satoshi Kon’s aptly named Perfect Blue. The perfect film makes its Blu-Ray Review thanks to the folks at Shout Factory loaded with special features!

Few filmmakers come out of the gate as fully formed as Satoshi Kon. Perfect Blue is not a good Anime film, it’s a near flawless Film period end of discussion. No, qualifiers needed.

The film charts the rise and possible downfall of Mima a J-Pop star who is trying to transition from Pop Diva to Serious Actress. This road is about as bad a stretch of “50-miles of bad road” anyone would have to travel to attain a level of success. That is to say, it could be any female artist’s story.  Mima over the course of the film is stalked, gas lamped, forced into lurid nude photos, pressured to film a graphic rape scene by both friend and foe. All the while Mima attempts to keep her own sanity and confidence.

Kon has made a near-perfect thriller the likes of which Darren Aronofsky would praise and heavily “homage” in his Oscar-winning Black Swan. The film though critical of men and their general behavior it brings up, it is not a social critique. Like P.T. Anderson’s Boogie Nights, it neither condemns nor praises but rather shows the conduct of people as “business as usual”.  Which may be the most damning things the film does.

Kon is interested in telling his story and the pressure that is applied to his heroine.  How that is done with both subjective and objective points of views is stunning in the way that an early Brian DePalma thriller is stunning.  As the film builds to its crescendo, Kon never lets you in on which point of view he’s shifting to.  Because of the use of Animation to tell this story, the lines blur between reality and fantasy even further for an audience.

Kon as a filmmaker doesn’t see Animation as a genre but rather the perfectly formed technique to tell his story.  That distinction is what elevates this, and many of its anime cousins, because they treat animation like a decision to film in Black & White, or 35mm or IMAX. It is not a genre and Kon understood in from this, his debut, moving forward throughout his career.

Perfect Blue lives up to its name being a perfect film. All jokes and puns aside, it is a great film that should be seen by any serious film fan.

The New Digital Remastered Presentation Of The Film is nothing short of stunning. The problem with the film making it’s debut on Blu-Ray was that it awas initially created for the Japanese direct-to-video market as a second-tier animted feature. It was only when the producers realized they had a great film, after a few viewings that they decided to rush it into theaters. Shout Factory has been given this remaster from the Japanese distributors and they have taken time and care with this process. The film looks beautiful in a way it hasn’t before on home video. The film, projected, has looked washed out and pixelated. Nothing like this is the case with this version. Fans of the film will be amazed at how good it looks. Bravo to Shout Factory for making sure that they got the best assessts possible for this release.

There are a plethora of audio extras making it easy to choose your preferences. Watching the movie I only sampled the Japanese original mono (complete with sound cracks/pops) and the remixed 5.1. I only sampled the English (not a fan of dubs most times) and the interesting subtitles. I mention interesting because they have a “songs and signs” subtitle option which for anyone watching a dub is a lifesaver. Especially with considerations to Perfect Blue and how dependent you are on being able to read certain items.

Satoshi Kon Lectures is a 42-minute lecture series filmed for Japanese Television. This in lieu of a commentary by Kon is fantastic. it’s video origins and a lot of the inner intentions and his feelings of the infamous “rape” (he thinks he went too far), even shows the Laserdisc edition released in Japan (which this reviewer desperately wants), discusses Darren Aronofsky’s love of the movie and homages, even discusses his interpretation of the ending.

Satoshi Kon – the 11-minute interview was done as apart of the press during the films initial Japanese release. It’s a fascinating look at a young Director before becoming an internationally renowned director. (In Japanese with Subtitles)

Junko Iwao – the 5-minute interview was done during the initial release in Japan. Iwao discusses how she got the part and her relationship to the role, and her concerns about the violence against women. In. A weird way Iwao from describing her process mirrored Mima in very specific ways. (In Japanese with Subtitles)

Ruby Marlowe – is a 3-minute interview with the English voice actor who played Mima regarding her approach to the work in Perfect Blue. (In English)

Wendee Lee – is a 2-minute interview with the English voice actor who played Rumi regarding how the actress portrayed the complexities of this part. (In English)

Bob Marx – is a 2-minute interview with the English voice actor who played Mr. Me-Mania regarding how the he portrayed the stalker/“villain” of the piece. (In English)

“Angel of Your Heart” Recording Sessions is literally 4-minutes of the actresses who play the group CHAM! Recording the song. The actresses/singers seem to be having the greatest time ever recording this song.

Rounding out the special features are the English Credits, Original US/UK trailer, UK re-release trailer, and Japanese trailer. The US Trailer beginning with a great Roger Corman quote about the movie is hilariously ‘90s (Trailer voice guy does the overwrought narration). The UK re-release trailer is much better being a lot more impressionistic. The Japanese Trailer also treat the film with a lot more respect (the trailer comes out without subtitles).

It cannot be said enough; Perfect Blue is a classic. Shout Factory has treated it as such. HIGHEST POSSIBLE RECOMMENDATIONS!!!