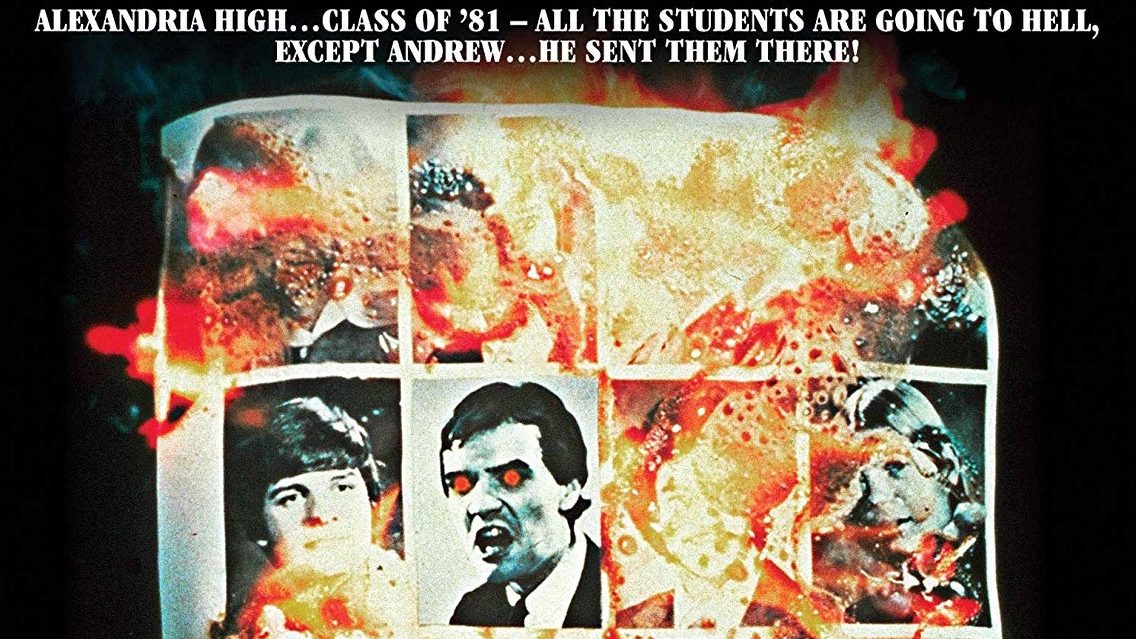 Long out of print Cult Horror Oddity Fear No Evil is new to Blu-Ray from Scream Factory blessed with a new transfer and extras.

One had hoped that Frank LaLoggia’s Cult Horror film Fear No Evil would live up to its lunatic plot and great soundtrack.  Unfortunately, it’s a mixed bag with some great moments hampered by muddled script and direction.

Andrew Williams (Stefan Arngrim) is your average 17-year-old circa 1981.  He has dreams of going to a good college, finding a girlfriend, being ignored by bullies. Oh, yeah… he also realized he’s the reincarnation of Satan hisself!!! Gasp!  Shock!  Oh, my gee-zee!  What’s a growing teenage boy to do?  Well if you’re Andrew only a few things like a game of killer Dodge Ball (these kids obviously didn’t learn from Patches “if you can dodge a wrench you can dodge anything” O’Houlihan) and killing a unsuspecting Golden Retriever to drink its blood (there’s a lot of drinking of blood) before a light show that would disappoint The Manitou. Yes, there something about reincarnated Angels and the fight for the earthly plane too.

Even now reading that semi-plot synopsis this cult oddity should be entertaining to the nth degree.  Alas it isn’t a quarter of the entertainment that one would expect.  The issue lies squarely on the script written by LaLoggia.  The screenwriter doesn’t seem to understand the possible goldmine he has.  What could have been an easy “Carrie meet Exorcist” rip off (which this reviewer is sure is how it was sold) is teased to be that but is anything but.

The film eschews most of the high school plot and troupes to a large degree, which isn’t good.  Rather than the buildup to Andrew’s coming as Satan with the likes of bullying and torment we’re treated to lengthy sections in a Castle, older folks discussing theological ideals and treatises on the Catholic Church’s policies on suicide.  It does contain some of those High School scenes but because it’s so unbalanced it never feels like the film you know it wants to be.  Settling for a muddled mess rather than choosing to go full-on High School Horror film.

Credit where credit is due, LaLoggia’s film has a soundtrack that most movies would kill for.  Tracks by The Ramones, Talking Heads, Patti Smith, The Sex Pistols.  I truly amazing soundtrack that one wishes the film would live up to.

There’s nothing to fear in Fear No Evil.  That is one of the many issues go awry with the film.  Though if you’re one that loves long tracking shots of naturally lit Castle Halls and Rooms ala The Favourite this film still won’t be for you.

The new 4K Scan of the Original Film Elements is nothing short of spectacular.  The transfer retains all of the grain structure and contrast on the low light shot film. For a lower budget production the film looks like a mid-60s Bergman Film and the transfer is a large part of that.

Audio comment by Justin Beam from Shout Factory and Stefan Arngrim is a solid track.  Arngrim is loquacious without Beam having to prompt him and recalls quite a bit.  Some of the discussion points do overlap with his long-form interview but luckily those points are expounded on in the commentary.

Stefan Arngrim On Giants and Feeding Darkness is a 37-minute interview. Similar to Vice Squad’s interviews this is divided by a question prompt. Beginning his origins as a Child actor and working through the last part of the Contract era at MGM Arngrim does a pretty thorough job of going through his life. Starting with what was the first scene they shot for Fear No Evil (if you’ve seen the film you can get what it is), Arngrim is pretty honest about the film, LaLoggia, and the production.

Pyro, Gators, and The Devil John Eggett in Fear No Evil is a 28-minute interview with the Special Effects supervisor. Similar to Vice Squad’s interviews and the one with Arngrim this is divided by a question prompt. Being prompted about his early years with Rocketry (building Model Rockets) and how that lead to him going into the Military into special effects. There are some great bits not just about Fear No Evil but other. From someone stealing a Prop M-16 to Fear No Evil shoot, there are some truly great anecdotes the FX’s man had in store for anyone that watches.

Rounding out the special features is a trailer, TV Spots and an Image Gallery. The trailer is more of a teaser lasting only 39-seconds shorter than trailer. The TV Spots amount to 3-minutes and 7 Spots. The image gallery consists of about 50 Lobby Card, Behind the Scene photos, Posters and more. It runs automatically can be paused but not navigated through.

Fear No Evil is definitely a “Fans Only” purchase.  Those who love the film will love the depth of the special features produced by Scream and the gorgeous new 4K Scan of the film.