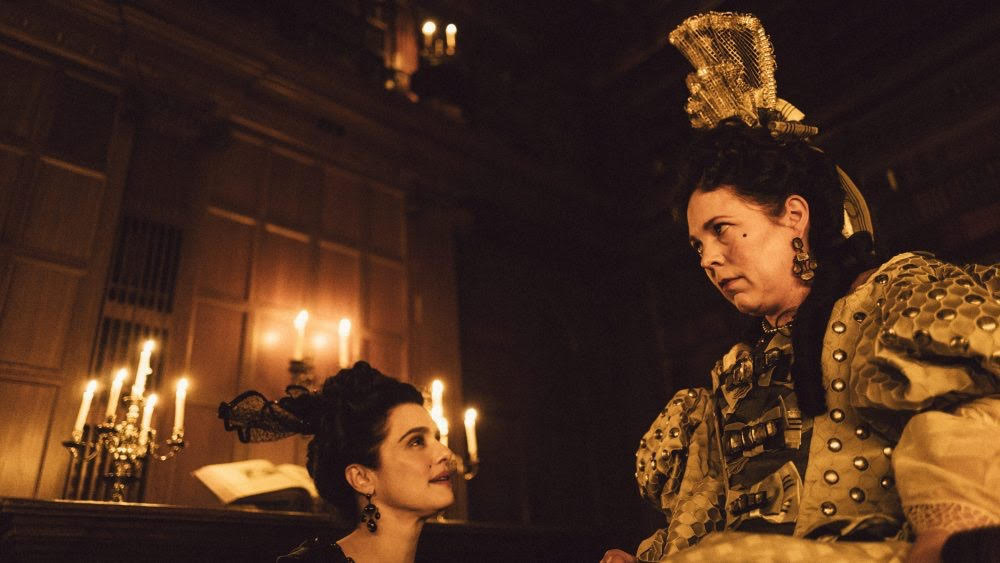 Yorgos Lanthimos latest The Favourite finds all (and we do mean all) is fair in love and war especially betwixt those in the High Royal Court of 18th Century England.

The Favourite is a costume drama for those that hate costume dramas.  Yorgos Lanthimos’ latest still shows his disdain for humanity but in an entirely new package.  This bawdy costume drama is part Barry Lyndon and part deranged pitch black screwball comedy.  At its very core, the film is a toxic romantic triangle.

There is no one held in higher esteem by Queen Anne (Olivia Colman) than Sarah Churchill (Rachel Weisz).  Sarah is Anne’s highest advisor, confidant, friend, and more.  Helping the volatile monarch on all matters of state and personal affairs, Sarah is as such the defacto Queen.  She speaks and acts on Queen Anne’s behalf.  It is with the arrival of Abigail (Emma Stone), Sarah’s disgraced Cousin that all dynamics shifted.  Abigail’s bright and innocent exterior belies a ruthless and cunning soul only second to the more seasoned Sarah.

To discuss the further plot mechanics and detail of The Favourite would be to ruin one of the most unexpected and devilishly fun cinematic experiences of the year.  Screenwriters Deborah Davis and Tony McNamara have created the pitch-black Costume drama version of Joseph Mankiewicz’s All About Eve.

Using the backdrop of England’s war with France the writers and director Lanthimos have created their own War between Sarah and Abigail.  It is a war of words, deceit, sex, power, corruption, and bunnies.   One where women hold the power and men are pawns too busy attempting to fornicate or reveling in their baser instincts.

As well written as The Favourite is, the film is matched word for word in its visual splendor.  Cinematographer Robbie Ryan and Production Designer Fiona Crombie have created a chiaroscuro world of candlelight, smoke, and dust.  Their work here is as ethereal as it is gritty.  Under Lanthimos’ direction, the world of The Favourite is one that even in the most decadent halls of power is littered with dirt, wax, and soot.  Lanthimos’s film never feels stately, there is a nervous energy that permeates throughout that makes the 120 minute run time feel half that.

The trio of performances by Colman, Stone, and Weisz are fantastic.  Weisz and Stone as the opponents in this skilled game of social climbing are perfectly cast.  As Sarah and Abigail, the actresses performances recall the best dances of this type like Bette Davis and Anne Baxter or Davis and Joan Crawford.

There is a glee to Weisz’s performance, a small crook of a smile that seems to bleed from every devilish amoral moment Sarah attempts to hold onto her power.  Sarah is both mentor and tormentor to Abigail, never fully trusting her.  Weisz portrays Sarah as neither a victim nor hopeless waif as she begins to lose favor with Queen Anne.  Sarah sees it as damage control until it is too late.  The way that Weisz plays that as someone who has lost control of a situation is one of the more interesting performance arcs in recent memory.    The film never postulates that Sarah is a villain but Weisz is so arched and comfortable in that mode of Femme Fatale of a certain type that one would be hard pressed to not label her as such.

Stone as Abigail is the type of showy characterization that many a young Star hope for but few get a chance at, rarer are able to perform at the level she does.  Stone as Abigail is Stone spiting Salaciously Literate diatribes like a hungry Rapper on a Mix Tape.  There’s that kind of rawness to the moment that Stone understands this is a shot at more and never relents the entire film.  Much like Weisz, Stone’s performance is so arched that though the film never states Abigail is a villain Stone makes sure we understand that by the end Abigail has no moral compass only the need to keep her power.

Though Stone and Weisz are the co-Leads it is Colman that is the clear winner, being given a role to match her immense talent.  Queen Anne is at turns mean, sad, angry, stately, stupid, funny, and most of all innocent.  Colman portrays Anne as both victim and victimizer, a woman who through control was never allowed to fully mature.  It’s a dazzling display of acting to watch Colman at turns move from mean-spirited to jealous to envious all in the matter of a few seconds. Queen Anne is the center of the film, not a person, an object power to be fought over and won by Sarah or Abigail.  Colman’s Anne relishes this objectification and plays to it with a childish enthusiasm.  It’s a brazen and hilarious performance that should give the actress much-deserved accolades.

With pitch-perfect script, direction, and acting it is sure to make Yorgos Lanthimos new rabid fans while keeping his staunchest of supporters happy.  The Favourite is the darkest of Dark Comedies in an Awards Contender’s clothing.  It’s all the better for it.

The Favourite is in theaters November 23rd