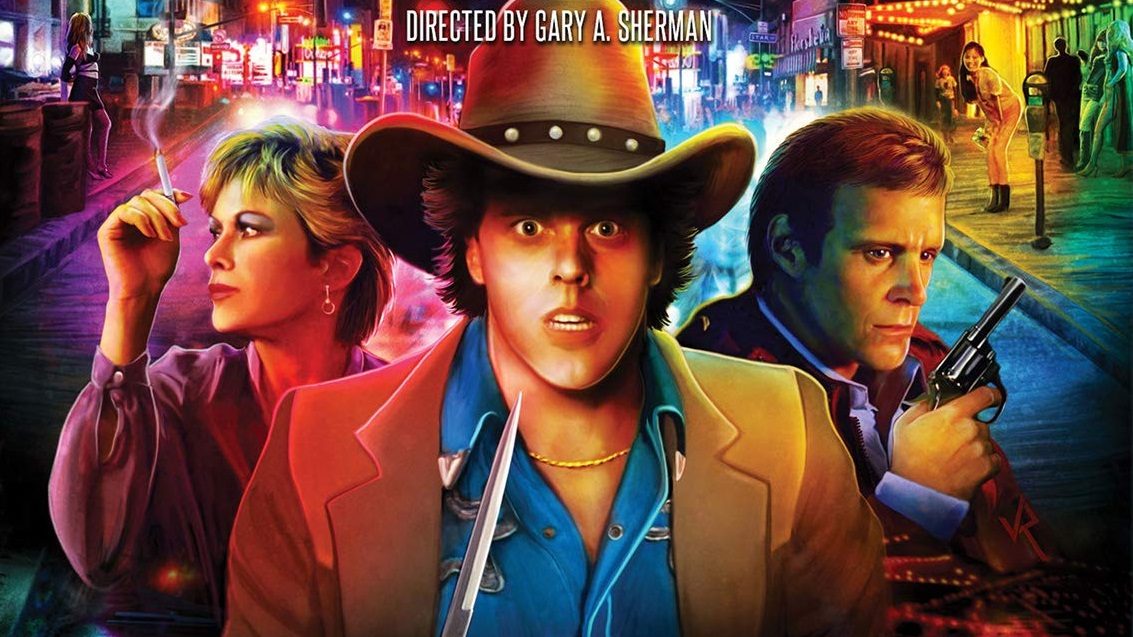 Adam loved discovering the grit and grime of Vice Squad.  Scream Factory has brought the 80s cult classic back to life on Blu-Ray with a new 4K scan of the negative and a host of extras.

Some films just absolutely floor you with just how good they are.  Reputation proceeding them, they still knock you out.  Gary Sherman’s Vice Squad is just one of those films.  Part Cruising, Part Terminator, all 1980s Neon Soaked Grimy Action Thriller. Saddled with an all-time lunatic performance by the indomitable Wings Hauser, Vice Squad is what you want every low-budget action VHS Action Film to be, but unfortunately, are not.

Set over the course of one night as Princess (Season Hubley) attempts to outwit, outrun, and outlive Ramrod (Hauser) the vicious pimp/psychopath she managed to set up with the help of cop Tom Walsh (Gary Swanson). It will not be easy as Ramrod is the Pimp equivalent of Schwarzenegger’s T-800; an unstopping killing machine.  Ramrod evades cops, manages to torture or kill anyone that doesn’t help him in a tenth of a second (even those willing and compliant) because he is pure undiluted id.  Walsh and the crew that makeup Vice Squad (including but not limited to Pepe Serna, Beverly Todd, Joseph DiGiroloma, and Maurice Emanuel) are a race against time to catch Ramrod before he kills Princess.

The primary reason for the success of the film is one man; Wings Hauser.  As Ramrod, Hauser is next-level great.  Ramrod is an unforgiving living nightmare that destroys anything in his path as anything we’ve seen on screen.  There is a malicious glee that Hauser brings to Ramrod that elevates this from normal psychopath to amazing arched performance.  Everyone is better because of him and his performance.

Director Gary Sherman, coming out of Chicago from a Photography and Art background (he worked with famous B&W Photographer Aaron Siskind), creates the perfect milieu of artful lighting and documentary style photography before it became a cliché.  The results are something more akin to Michael Mann and William Friedkin.  The film is shot beautifully by John Alcott giving the film’s nighttime setting a neon glow that would become a cliché eventually.

Vice Squad’s lean and economical unrelenting style recalls James Cameron’s The Terminator.  The film deals in the sleazy milieu that Sex Workers must trade-in.  Because of that efficiency in storytelling, the story never lingers on that sleaze.  This makes Vice Squad one of the few films of this era dealing with this subject that doesn’t feel too exploitative.  Vice Squad at its core is a fever fueled crime thriller that shouldn’t be missed.

The new 4K Scan of the Negative is gorgeous.  John Alcott’s neon-infused cinematography pops on Blu-Ray.  Contrast, Black Levels, and Sharpness all are perfectly balanced.  Fans of the film will be pleased with this new transfer.

Tracking the Beast is an all-new 58-minute interview with actor Gary Swanson. The interview is divided into title card sections. Swanson covers all the bases here beginning in his childhood to teenage years that began his writing career and the “relationship” to writing to his transition from Writing to Acting (he was in the Actor’s Studio). The actor covers a lot of ground of an interesting life lived (like platform dividing off the Atlantic City Pier), working Soap Operas, Lee Strasberg, working on Kojack, but the main focus is the work done on Vice Squad. There’s a lot of great unfiltered stories about the production and release of Vice Squad.

Of Poltergeist and Neon Lights is an all-new 72-minute interview with director Gary Sherman. The interview is divided into title card sections like the Swanson interview. The director begins by discussing his childhood in Chicago and never thought he was going to be a director. How he became a student under Aaron Siskind (the world-renowned photographer) and the unusual eccentric nature of the man as he worked on his degree. How he found an old Arriflex and restored it to begin to make shorts. How he rose through the ranks and how it all ended and he left after the ‘68 national convention and moved to London. Workin in London, which lead to Raw Meat aka Deathline which lead to Dead and Buried which finally led to Vice Squad.

Hollywood Magic is an all-new 62-minute interview with producer Brian Frankish. The interview is divided into title card sections like the Swanson and Sherman’s interviews. Beginning with his humble origins as a child who was too poor to watch films going into college for Finance then changing to Theater Arts and, as the cliche goes, moved to Hollywood. Through rise-and-grind, he moved up through the ranks behind-the-scenes rather than acting (which he started). Working as a “can boy” he learned a lot about post-production and editing. Moving from Editing to Assistant Directing. Moving to New York over a beautiful woman where he found work as a Sales Rep for an Ad agency. Eventually discussing Vice Squad and hos he came to be involved.

Roots of Reality is an all-new 44-minute interview with actor Beverly Todd. The interview is divided into title card sections like the Swanson and Sherman’s interviews. The actress begins with her origins in Cleveland and a Karamu Theatre that she would eventually be working in. Inspired by Lena Horne and other starlets moved her to go into acting. Moving from Cleveland to New York to get into acting. Moving eventually from Broadway to London and working with Sydney Poiter.  All leading to the work that was done in Vice Squad.

Catching a Killer is an all-new 58-minute interview with actor Pepe Serna. The interview is divided into title card sections like the Swanson and Sherman’s interviews. The character actor begins with his beginnings/childhood in Corpus Christi Texas and where he got the nickname Pepe. From Boxing and Childhood friends and creative outlets to the time with his Older Brother. Stories of Music and Movies with his mother. Working with Del Close the improv guru. Serna does a great job of not only discussing his humble origins but also with discussing the work done on Vice Squad.

Princess Driver is an all-new 24-minute interview with actor Michael Ensign.  The interview is divided into title card sections like the Swanson and Sherman’s interviews. The character actor begins with his work in London as an actor and also going to drama school in the UK.  The actor has some great stories about Vice Squad’s production.

Hollywood Streetwalking is an all-new 12-minute featurette where we return to the locations featured in Vice Squad.  This is similar to the Horror’s Hallowed Grounds featurettes included in many of Scream Factory’s other editions.

Rounding out the special features are The Theatrical Trailer, TV Spots, Radio Spots, and Still Galleries.

Vice Squad is the real deal, a nearly forgotten Cop Proceedular Thriller worth your time.  Scream Factory has put together an exhaustive set of extras nearing close to 8 hours of material (if you include the commentaries).  HIGHEST POSSIBLE RECOMMENDATIONS.