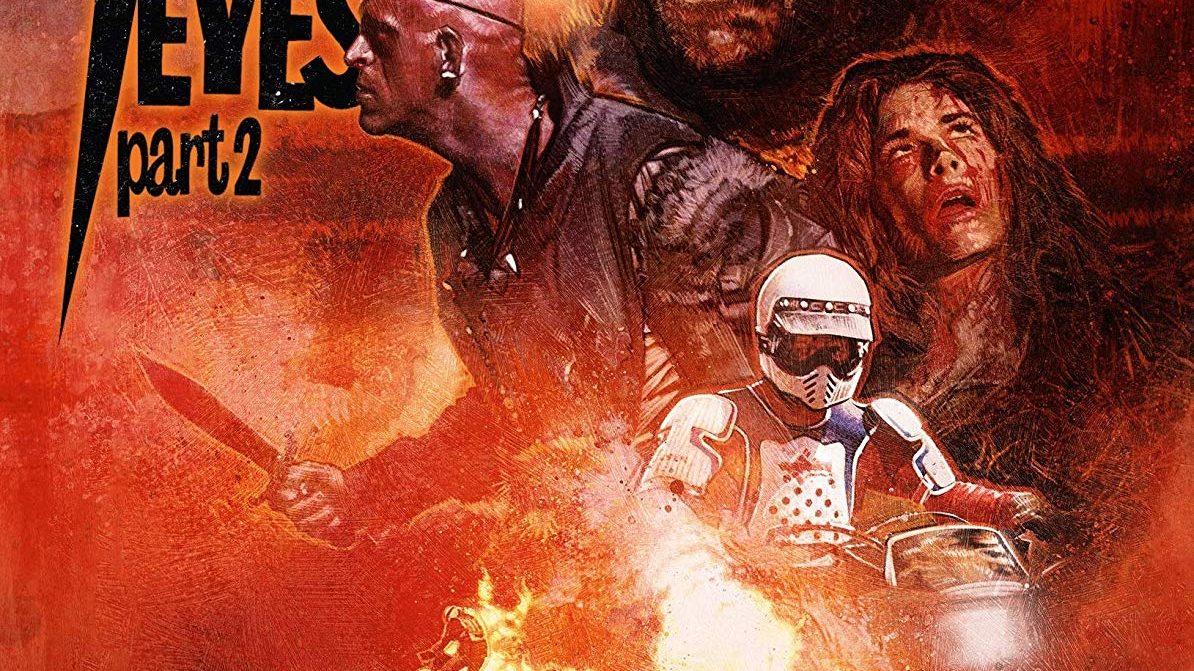 Whoa, Nelly!!! Wes Craven’s The Hills Have Eyes Part II is not what you expect from a sequel to one of the best Low Budget 70’s Horror Films.  Arrow Video has brought the film to Blu-Ray with extras and a new transfer.

Some films just miss the mark.  Some miss the mark by a wide margin.  Then there’s Wes Craven’s The Hills Have Eyes Part II.  Where the original was a great bumpy ride of a lo-fi horror film the sequel is as far away from great as you can get.  This doesn’t impede on the watchability.  In fact, its defects enhance the entire goofy experience.

As the opening crawl which is also narrated to us explains, the events of the first film have occurred and though the family escaped and managed to kill the mutated family they faced off again, THE HILLS STILL HAVE EYES (which is a much better title and adding the moniker “Part II”).  Eight years later Ruby, now Rachel (Janus Blythe), is living a semi-normal life.  As opposed to the mutant/inbred in the middle of the desert killing unsuspecting families lifestyle she had been.  Rachel who’s along for the ride on a weekend excursion to a Motocross event with friends that combined does not have the intelligence of a roll of nickels.  Of course things go bad because they CROSS THE SAME DAMN DESERT AND WRONG TURN the family did eight years ago.  All the same stuff happens but with Dirt Bikes, a Blind woman who may turn out to be Matt Murdock/Daredevil, many-many-many Human flashbacks, and of course the infamous DOG FLASHBACKS.  Will these morons survive?

One wishes that The Hills Have Eyes Part II had more creativity with its story, not just “let’s make it a teen slasher because that’s popular” mentality.  Everything about the film is wrong-headed and hilarious.  It would have been interesting if they had allowed Cass (Tamara Stafford) to be a real character with vulnerabilities but they decide to make her a literal superhero that even though her surrounds are COMPLETELY NEW navigates them better than the rest of the cast.  It’s these types of blatantly lazy script and directing decisions by Wes Craven that are mystifying.

That does not mean the film is any less entertaining than the original, just in a completely different way.  Where the original was a smart, terse, violent, and hard horror film, the sequel is as stupid, soft, comical lob of a teen slasher film.  The film only exists to make money and fill up a runtime.  Proof of this is within the five minute Dog Flashback. Yes, eight years later Beast is still alive and remembers his part in the first film so much so we cut to his memories of the events with stark clarity.  One will laugh as much as raise their hands in the air in bewilderment at why things are occurring.  Making this all the more baffling is within the same year Craven would make one of his most iconic and artistically refined work in A Nightmare on Elm Street.

The Brand new 2K restoration from original film elements is beautiful.  There are a few issues with some scratches in the Negative but that appears just from wear and tear.  For the most part, the transfer is handsomely produced with most of the grain structure and contrast intact.

The newly recorded audio commentary by Hysteria Continues is nothing short of brilliant.  The fine folks from the Podcast group contribute a hilarious and informative commentary track to this oftentimes dumb horror sequel.  This is definitely worth a listen and the highlight of the set.

Blood, Sand, and Fire: The Making of The Hills Have Eyes Part is new a 31-minute archival making-of Documentary featuring interviews with actor Michael Berryman, actress Janus Blythe, production designer Dominick Bruno, composer Harry Manfredini, and unit production manager/first assistant director John Callas. We begin with Craven shot the film for $125k and created something actually considering is hilariously awesome. Great tidbits include; a lunatic move by an actor by getting a haircut. The dog flashbacks and the flashbacks in general how they used those flashbacks were used to their advantage when having a budgetary disadvantage and even a damn food fight that broke out. So much is covered in this doc and all of it pointing to how the film became the delightfully stupid mess it is.

Rounding out the special features are a trailer and still gallery. The Trailer is as crazy as the sequel. The gallery includes not only behind-the-Scenes photos but poster art, ads, and VHS covers. The gallery plays over 6-minutes if Manfredini’s score.

Arrow has produced a beautiful set with great extras.  The film itself is entertaining in the way that a family dinner gone wrong is entertaining to a non-family spectator.