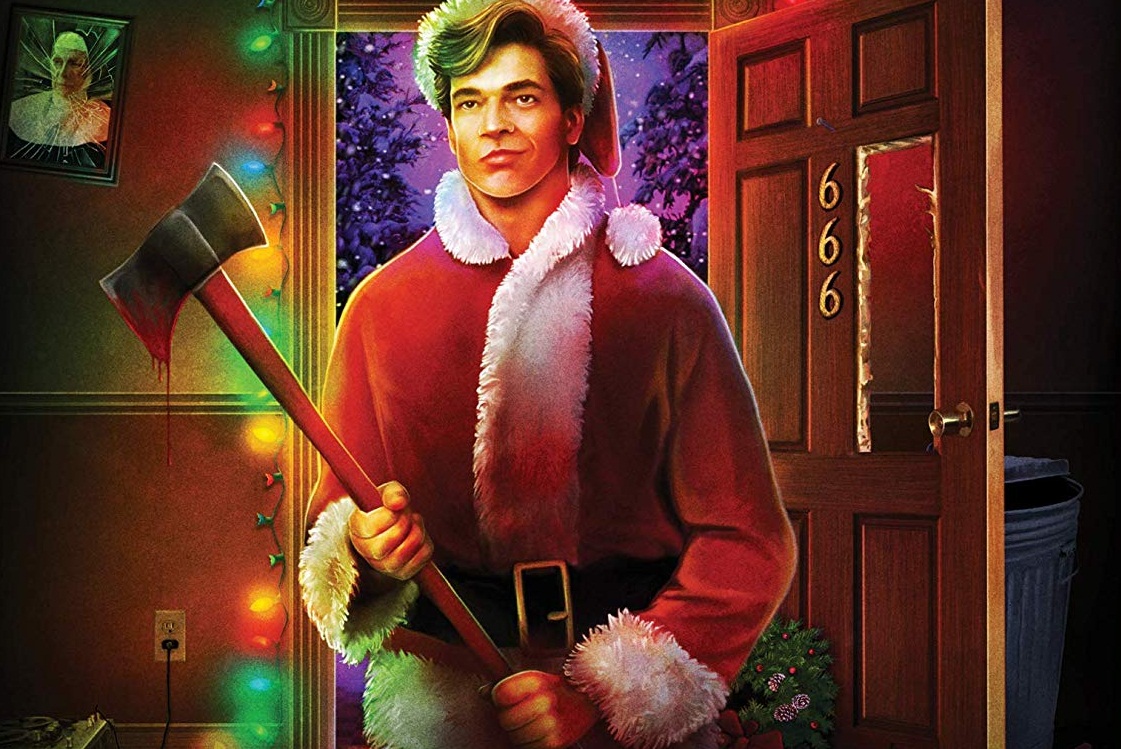 GARBAGE DAY!!!! Adam takes a look at the trashy and highly entertaining Silent Night, Deadly Night 2 new from Scream Factory on Blu-Ray filled with special features to delight in.

Silent Night, Deadly Night 2 may be one of the crassest and overt cash-in to a horror film of the 1980s.  That doesn’t mean that it isn’t a hell of a lot of fun.  This is another case of a sequel trashing the tone of the original in favor for what was popular at the time.  What has been produced is equal measures frustrating and delightful.

Picking up ten years later (which would be 1994, though the film was released in 1987) the film tells the story of Ricky Caldwell (Eric Freeman) the little brother of Billy Chapman (Robert Brian Wilson).  Ricky is just like Billy, with a huge aversion to Christmas and specifically Jolly ole St. Nick. If you haven’t seen the original don’t worry, they make sure that they’ve got approximately 45 minutes of flashback footage from the original to “pad out”the film.  Once Ricky is finished explaining his brother’s exploits the fun begins.

As frustrating as it is to see almost half a film’s running time devoted to recycled footage from the first film, Silent Night, Deadly Night 2 when it is working on its own is pretty awesome. Awesome in that way that cult Z-Grade horror can be.  There is an almost WTF way the film proceeds that’s highly entertaining.

This is the kind of film that makes Ricky’s primary goal to kill a Nun named MOTHER SUPERIOR (Jean Miller filling in for Lilyan Chauvin from the first) in vengeance of his brother death.  The film does not just make this Ricky’s goal but tries to persuade you to actively root for him to obliterate this woman who is as dirty as Ricky and Billy in her own way. The way that frame Mother Superior, they’ve managed to make her scarier than the Nun from The Nun.

This still does not excuse the film from stealing and repurposing half of its running time from the original film.  One wishes that editor/writer/co-producer/director Lee Harvey was given more time, more budget, and more preproduction to actually sort out what could have been an even better sequel.  Unfortunately, this isn’t the case and what we are left with is Silent Night, Deadly Night 2 half stupid, half almost brilliant, all crazy.  By the way, how they never called it Silent Night, Deadly Night 2: Garbage Dayis beyond me.

Scream Factory’s new 2K Scan of an Archival Theatrical Print is light years better quality than the original DVD release (which came in a combo pack with the original).  The transfer won’t stand up to the quality of some of Scream’s recent efforts like Urban Legend but that is not Scream’s fault, it’s the source.  The print they worked with is good but as with all Theatrical Prints there is a lot of wear and tear.  Scratches, dirt, and pops all show up with regularity but not bad enough where one will be distracted.  Fans will be pleased with the uptick in quality if they had experienced that really terrible original DVD release.

Slay Bells Ring Again: The Story Of Silent Night, Deadly Night 2 is a 77-minute thorough making-of documentary.  This is one of those instances where the Making-Of may rival the film in entertainment value because of the backstory of how the film was made. Co-Writer/Director Lee Harry, Actors Eric Freeman, James Newman, Elizabeth Kaitan, Darrel Guilbeau, And Kenny McCabe, And Makeup Effects Artist Christopher Biggs all discuss the production and how they came onto this sequel.  There is so much entertaining and fascinating content specifically about the integrating the footage from the original into the sequel and how that came to be.

I Don’t Sleep is a 67-minute interview with Effects Artist Christopher Biggs.  The interview is more of a career spanning discussion of Biggs contributions to not only Silent Night, Deadly Night 2 but Teen Wolf, Critters (which the Box Set took portions of this interview), Friday the 13th Part VI: Jason Lives, Nightmare on Elm St. 5: The Dream Child, and a host of other projects. It’s a great featurette that also includes BTS stills from not only this film but from all the films Biggs discusses.

Garbage Days are Here Again is a quick look at the production’s locations, similar to Horror’s Hallowed Grounds.

Ricky Today is this sort of short film/interview with Ricky Caldwell (Eric Freeman) that plays out much like Frank Henenlotter’s Basket Case short film on the Basket Case Blu-Ray.

Rounding out the special features is the Theatrical Trailer.

Silent Night, Deadly Night 2 may not be for everyone but with over 3.5 hours of special features (that’s not including the two commentaries) all devoted to how this odd duck of a sequel came to make this a; DEFINITE RECOMMEND!