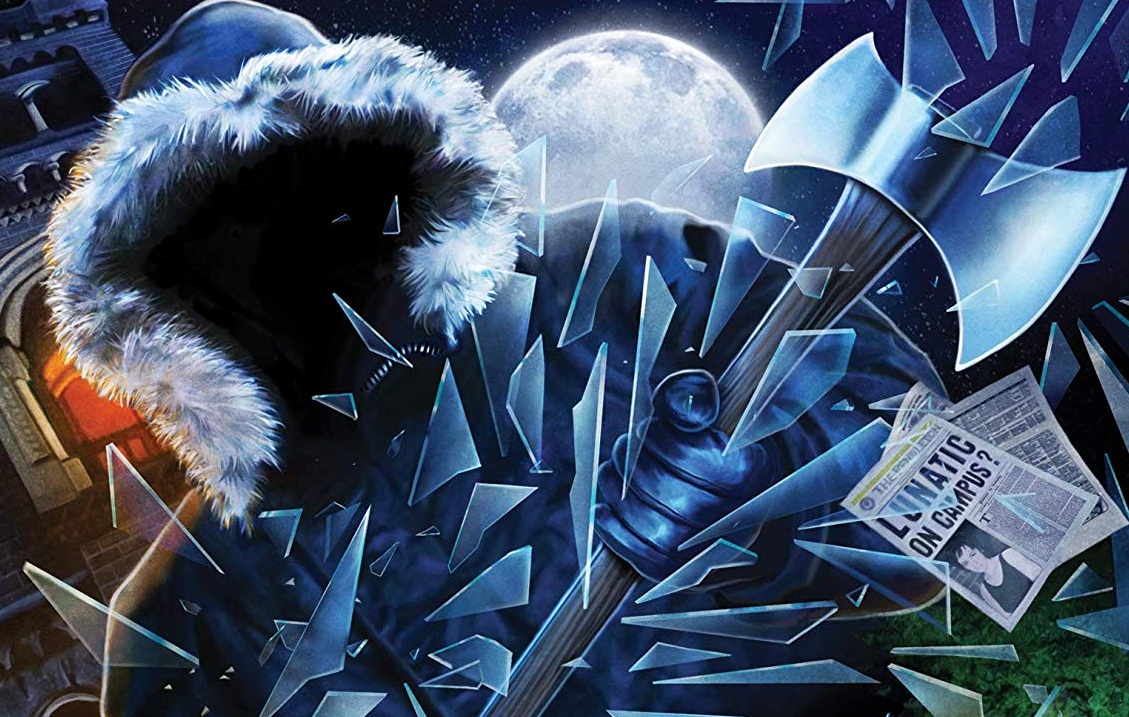 Adam loves everything about Urban Legend and the loaded 2-Disc Blu-Ray Edition that Scream Factory has unleashed on unsuspecting fans.

Two decade removed from the glut of slasher films Urban Legend still remains one of the most entertaining of that core group.  Both this and its sequel taking more from the Giallos of the 1970’s than the Slashers of the 1980’s.  The results are heightened melodrama and ingenious kills, more than anyone could ask for from a Slasher of this ilk.

The film begins with the most famous of Urban Legends; a young woman (Natasha Gregson Wagner in a Drew Barrymore-esque cameo) is driving alone on a highway or… so she thinks.  The murder of Michelle Mancini (Wagner) is the central mystery and driving force of the film.  How Michelle connects to the students and specifically Natalie Simon (Alicia Witt) is the core of the film.  With the help or possibly not of College “newspaper man” Paul Gardner (Jared Leto) Natalie attempt to unravel why her friends are being offed in the various most famous of Urban Legends.

Unfortunately, there are no alligators in the toilets in the film but what we do get is a great repurposing of the Giallo conceits and troupes to great effect.  Writer Silvio Horta appeared to have been inspired by Sergio Martino’s Torso and Dario Argento’s The Cat ‘O Nine Tails in equal measure as the central plots of both have appeared to have been mashed together for Urban Legend.  It is not a dig just as most slasher films of the era are so self-referential, which was the norm thanks to Scream, it is truly pleasant when a writer finds other material rather than 80’s Slasher to pilfer from.

The same can be applied in the direction of the film.  Jamie Blanks finds more of his composition and framing from the more stylish Giallos than the static American Slashers.  Like many of the Italian films, Blanks direction is always incriminating a character to throw an audience off of who truly the killer is.  It’s a fascinating film because of the different inspirations that Horta and Blanks appear to be taking from. Those inspirations make the truly gonzo ending perfectly in line with the Giallo style storytelling (with the added benefit of a serial killer giving a slide show).

Scream Factory’s partnership with Sony Pictures has only begun but this relationship has borne some of the best Transfers we have gotten out of Scream Factory yet.  The Transfer which was culled from a 4K/2K master provided by Sony is gorgeous.  The film shot on 35mm is beautifully reproduced here in Hi-Def.  The grain structure, blacks, and contrast are perfectly rendered in a primarily night-shot film.  The transfer is clean of any blemishes, spots, dirt, or any other artifacts.  In a word, it’s gorgeous.

The two commentaries one archival and one newly recorded are a great starting point for this disc.  The archival featuring Jamie Blanks, Writer Silvio Horta, And Actor Michael Rosenbaum is a lively affair with some fairly great production anecdotes.  The second newly recorded commentary is the one that fans will want to listen to.  Blanks leads a group discussion with Producer Michael McDonnell, Assistant Edgar Pablos, and Author Peter M. Bracke.  The group has nothing but affection and love for not only the film but themselves.   This commentary is like watching with a group of friends who just happened to have made the film.  There is a lot of production detail that is revealed along with some great ribbing of one another.

The crown jewel of this set is the 8-Part Documentary Urban Legacy.  Running and a beefy 2.5-Hour there isn’t anything that this documentary does not cover about the making of Urban Legend.  Produced in part by Blanks himself this detailed look at the production has access to not only the cast and crew but b-roll behind the scenes footage, test footage, and even a fascinating proof of concept trailer that Blanks shot to try to get the directing gig for I Know What You Did Last Summer.   The only person that actually doesn’t show up in the doc is (of course) Jared Leto.  It’s an entertaining and fascinating affair and well worth the investment of time.  The documentary, like last year’s Teen Wolf 3-Hour Making-of Documentary, Scream Factory has outdone themselves with the quality, care and investment in this title.

Not to be outdone they’ve included 75-minutes of extended interviews from the Urban Legacy documentary that wasn’t included in the doc.  Each of the participants from Alicia Witt to Christopher Young to Mike Medavoy has extra footage.

Also, they’ve included raw B-Roll style behind-the-scenes footage made during the making of.  Divided into 3-Parts that totals over 55-minutes, some of which was used in the Urban Legacy documentary but most has remained unseen.  It’s a fascinating look at various aspects of the production in an unadorned fly-on-the-wall style.

The archival Making-of Featurette plays out like a 10-minute extended trailer of what would come 20 years later with Urban Legacy.  It uses some of the same B-Roll and behind the scenes footage that Urban Legacy does.  All the same its an interesting albeit short featurette.

The Gag Reel is a standard 2-minutes of people flubbing their lines.

The Deleted scene is the infamous, and rightly cut “sex” scene between Michael Rosenbaum and Tara Reid with a small appearance by the Microwave Dog.

Rounding out the discs special features is the Theatrical Trailer and TV Spots.

Urban Legend is a late 90’s Slasher Classic that Scream Factory has given the A-List Treatment too.  Hours of special features, beautiful transfer makes this a HIGHEST POSSIBLE RECOMMENDATIONS!!!