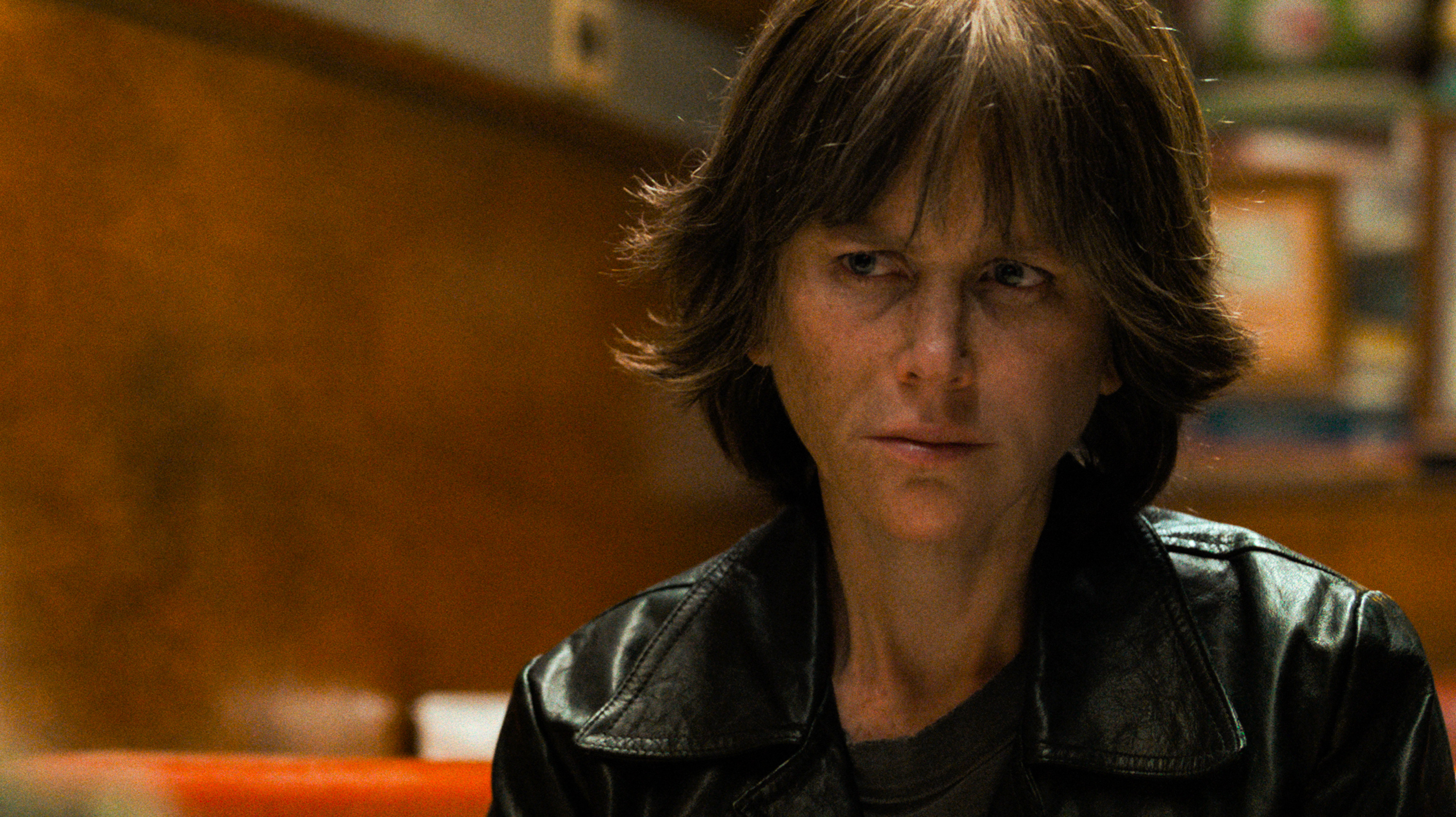 Destroyer begins like most great LA Detective Noir with a body in the LA River. This is where comparisons to the genre stop for the newest film by director Karyn Kusama.  What begins as your prototypical procedural slowly twists and turns into a dark character piece.  The film like its central protagonist, Erin Bell (Nicole Kidman) moves in and out of time and memory grasping at her own brand of renegade justice.

Bell is someone entirely new to the screen; hard-charging, no-nonsense, damaged cop.  That happens to be a woman.  Part of what makes Destroyer a great film is they have taken a convention of an exclusively male genre and flipped them. More than just flipped, Kusama working with writers Phil Hay and Matt Manfredi have tailor-made a female-centric story within the genre without dulling any of the edges or bite.  She isn’t just a hard-charging detective because the story demands it.  Rather Bell is a woman formed by what has occurred between the present and the past of the story.

The film smartly gives Kidman room to breathe and imbue Bell with complex layers of emotions not first easily read.  What starts as the clichéd Hardboiled Detective belies something wounded more complex.  Bell has a boiling anger that is the cause years of systematic abuse, of self-abuse, and guilt over a bank job went terribly wrong.

As the story begins we see as Bell does this could be her redemption.  Audiences have seen this played out so many times but not in the way Destroyer plays out.  There are no easy solves or paths for Bell.  Everything is a wall she must take down, usually with the only effective tool she has; violence.  Kidman gives Bell in these moments hyper-clarity, like a shark with the hint of blood in the water.

This is not Kidman’s Harry Callahan though. Where Callahan was a Fascist with a badge disbanding his own brand of justice, Kidman’s Bell motives are not as Civically-minded.  Destroyer plays with the notion of trauma and guilt more any detective driven film of recent memory.  Bell thinks by tracking down the long forgotten criminal Silas (Tobey Kebbell) will somehow right all wrongs from a messy undercover sting gone wrong 17-years prior.  The beauty and power of the film is that the further down the rabbit hole Bell goes, the more complicated for her and the audience it gets.

As complex as Destroyer and its characters get, Kusama never forgets this is a kick-ass action thriller. The film contains some of the best character driven action set pieces this year.  Kusama creates action beats that maximize not just impact but character.  The mid-film set piece is one of the tensest real-time sequences of recent memory. There is a lean economy to the way that Kusama stages and blocks the action that recalls the best of Jean-Pierre Melville.

Destroyer proves why Kidman is one of the best actresses working today.  It is not just the power and command of presence the actress has.  It is Kidman’s intelligence in finding amazing collaborators like Kusama.  Kidman and Kusama with Destroyer find material that elevates each other creatively.  The results are one of the best films of the year.  Run don’t walk to see Destroyer.

Following the film, there was a 25-minute post-Screening Q&A held by Film Independent as a part of their “Film Independent Presents” screening series.  In attendance was Moderator Elvis Mitchell of KCRW’s The Treatment, Director Karen Kusama, and writers Phil Hay and Matt Manfredi.  Here are some highlights from the Q&A.

Kusama discussed how the film was constructed around the reality of violence and the toll that it takes physically.  Hay and Manfredi discuss how the film is an Odyssey that each encounter that costs a small piece of Bell’s body. How the character’s main strength is that she does not care about what happens to her.

Kidman, Kusama and the writers discussed and described Erin Bell as a “desert creature”.  How the anger was a key to Kidman’s performance, and how Bell as a character is angered by everyone she comes in contact with.

Kusama discussed the reality and exploration of being a criminal and the cost that that transgression costs not just for one person but those around them.  They discussed how this informed the script’s development and how the film was created.  How the film was shaped as a play on the “outlaw romance”.

This project was being developed at the same time the trio were working on The Invitation (their third collaboration as the writers, they met Kusama on her vastly underrated adaptation of Aeon Flux). Both The Invitation and Destroyer were bore out of Kusama, Hay, and Manfredi wanting to make films about LA.

Kusama discussed how much of the cast came out of Comedy and Improv as it was a conscious decision for their “energy”.

Nicole Kidman actually read the script without “a firm offer on the table”.  This, as Hay and Mitchell discussed, is almost unprecedented. They discussed working with Kidman and how she builds an inner life for the character frist.  Hay and Manfredi wrote out a detailed history for her to work with, which Kidman loved.  They only really changed upping the age of the character when she came on board.

Kidman wanted to go further with the aged look.

The title Destroyer was not immediate and took a long time to come up with.

The writers discussed how Kidman worked with them in developing the script and how she felt the “small moments” were the most important.  How Kidman was inspired by the lean economy of the dialog and the actions in the script. They wrote her a detailed bio for the character from birth to where Bell was when we see her in the film.

Finally, they discussed the technical difficulties in filming a scene involving a Dye-Pack from a bank and how the actual Dye-Packs cannot really be reproduced because of how they specifically work. (Note: within the film, it comes out as a puff of smoke and not the “wet blast” that Dye-Packs do).

Destroyer is out in limited release Christmas Day and expanding in early January 2019.