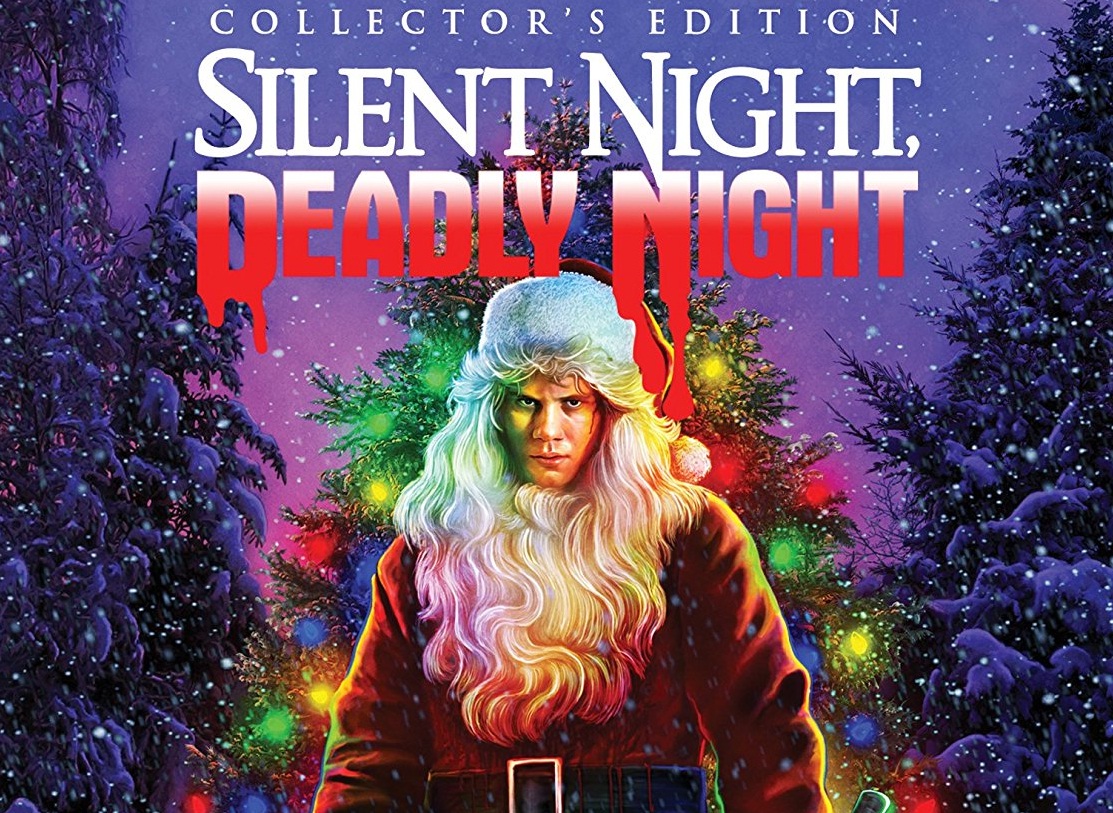 The B-Movie Isle/Adam begins the yuletide season with the cult horror classic Silent Night, Deadly Night released by Scream Factory in a gorgeous two disc Blu-Ray Edition. Is the sad-sad story of psychopath “little” Billy still disturbing?  Is Mother Superior still the evil Nurse Ratchet style Nun she was thirty plus years ago?  Is this a comedy as the screenwriter claims or a true blue horror film?  Read on…

The film’s weapon that separates it from other slasher films is it adherence to following Billy (Robert Brian Wilson) the young boy (played by Danny Wagner) and young man who eventually turns psycho Santa Claus on a small Utah town.  The film doesn’t sympathize with Billy but empathizes with him.  A huge difference that makes the film so powerful.  Silent Night, Deadly Night doesn’t ask you to feel bad for Billy but it does show you the exact road that took him to get there.  It may not be pretty but it is a fascinating, albeit brutal ride.

Be warned the film has no problem with taken the Catholic church to task and in the most critical of manners.  Silent Night, Deadly Night as written and directed makes Billy’s turn from a shell shocked young kid to eventual Santa Claus fearing serial killer, the church’s fault.  Specifically, the church in the form of Mother Superior (Lilyan Chauvin) who manages to mentally and physically abuse Billy as a child as a means to “solve his issues”.  Many will be more offended by this plot exposition than any of the gore or kills.

One of the issues people may face is that Silent Night, Deadly Night plays as a serious somber drama more than a slasher/horror film.  Much of the film’s run time is spent on the set up and the “whys” rather than the actual kills.  One expecting Friday the 13th Part __ will be sadly disappointed.  Silent Night, Deadly Night wants to be more and for the most part succeeds as being a dark drama with a serial killer as its lead.  It never does ask you to side with Billy as very apparent after he begins his killing spree, murdering everyone in the toy store he works in.  What Silent Night, Deadly Night does ask of you is your complete attention during its stark 96-minute runtime leading to one of the best final lines in horror history.

Disc one looks as good the low budget feature has ever looked on Blu-Ray. The less said about the disastrous prior Blu-Ray release the better. Scream has gone above and beyond with the help of Sony/Tristar pictures by giving us the best version of the film in a NEW 4K Scan Of The Original Camera Negative.

Disc two with its NEW 4K Scan Of The Original Camera Negative With Standard Definition Inserts is a mixed bag as to be expected.  Huge kudos to Scream Factory and Sony/Tristar by giving us the fans what we wanted, which is the unrated edition.  The inserts are definitely noticeable in quality level but while watching it I had fun with it calling it “80’s VHS Vision” whenever these moments would come up.  Scream/Sony/Tristar has done their best to clean up the footage.  It should also be noted that they definitely let you know upfront (like they had with Black Christmas) on the quality and change in the transfer.  It’s these types of small considerations that show how much respect Scream Factory has for it’s fan base.

The first disc only has vintage Trailer, TV, VHS and Radio spots.

The second disc is where the various special features reside amounting to well over three hours of content (not including the two commentaries).

The best feature of the two disc set is the Slay Bells Ring: The Story Of Silent Night, Deadly Night the 50 minute making-of documentary that covers everything from the writing of the original script to pre-production, to production and the critic backlash of the film.  Many of the original cast and crew are interviewed for this making-of.  Many of these interviews do not hold back on their thoughts or stories of the production.  It’s a fascinating look at the making-of this now infamous horror film.  Some will find that this making-of is more interesting than the film itself.

Christmas in July takes a look at the filming locations now and back then proving nothing changes in Utah, or not much.

Oh Deer! is a brief interview with horror icon Linnea Quigley and her work on the film and her iconic death in the film.

The new and archival commentaries are both solid but nothing truly fascinating that isn’t covered in the making-of document with exception of a few anecdotes.

Silent Night, Deadly Night gets the superior edition it deserves by Scream Factory.  There are some problems with the unrated version’s transfer but it isn’t anything that you can’t overlook for this extras packed edition of the film.  Recommended!