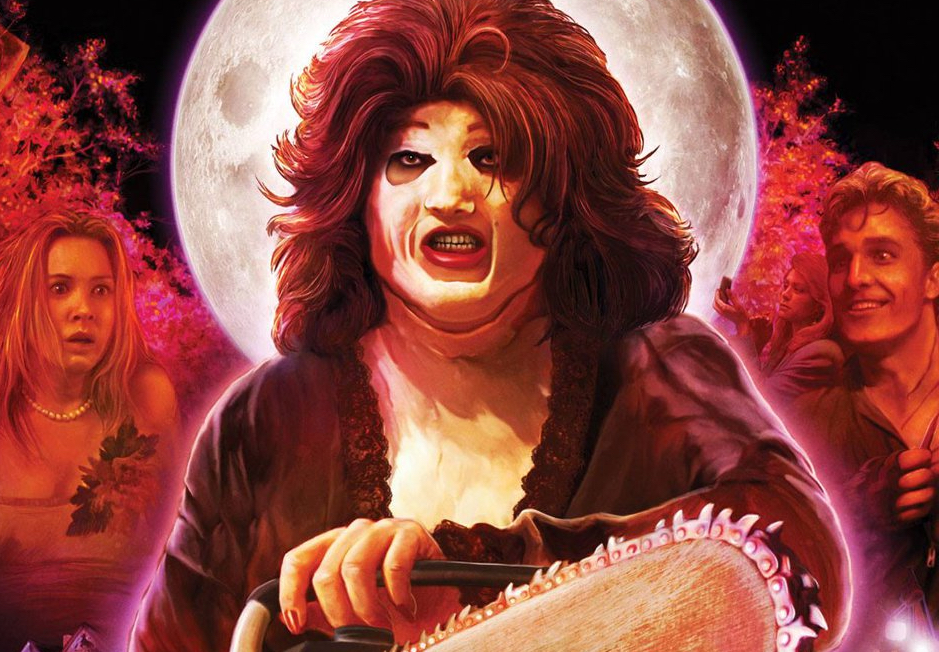 Alright-Alright-Alright… we got Matthew McConaughey, Rene Zellweger, Remote Controlled Legs, Chainsaws, Prom Night, and the Illuminati all play a part in Texas Chainsaw Massacre – The Next Generation. New from Scream Factory.

We could talk about Texas Chainsaw Massacre – The Next Generation like it’s a good film.  It’s not. With that being said it’s one hell of an entertaining one.  The film isn’t a case of cameos by Matthew McConaughey and Rene Zellweger but full-on starring roles for the young actors.  The results are arched in a way that’s hilarious in the best way possible.

Both sequel and rehashing of the original film. Instead of a group of hippies accidentally finding our very famous family it is a group of kids going to Prom.  Said group is caught by Vilmer (McConaughey) the newest paterfamilias of the Sawyer family. For Jenny (Zellweger) it’s a struggle for her life against these pyschopaths.  For Vilmer, Leatherface and the other family members it’s a regular old Saturday night in the middle of nowhere Texas.

The short of it is McConaughey owns this film from the moment he shows up.  This is a rare moment for McConaughey.  A sort of trilogy of crazed performances that starts with this film continues with Larger than Lifeand ends with Killer Joe.  One thing that he never gets credit for is just how overwroughtly funny the star can be. Here as Vilmer he is both ridiculous and scary in equal measure.  Wither its using the mechanical leg, screaming at the top of his lungs, or ensuring that he’s layered with a sheen of sweat McConaughey is at the top of his game here.

Writer/Director Kim Henkel may not have created a great film but what he has is an entertaining one and one that has no issue with amping things up to eleven.  And by eleven, I’m talking about a Spinal Tapeleven.  It’s that kind of film, a good old grindhouse drive-in special.  The film is the sort of freewheeling horror film that throws just about everything (and two kitchen sinks) at the audience.

This is a good new, bad news situation.  The good first, the theatrical cut gets a solid bump up in quality with the new transfer.  The film was shot on a low budget in the early 90s, not the best time for quality film stock and it shows.  Scream does a great job of getting the film looking the best it ever has.  The bad news is that the director’s cut is as bad as you remember it, quality wise.  The inserts for the director’s cut are barely above VHS quality.

The Buzz is Back is a 13-minute interview with Director Of Photography Levie Isaacks.  Isaacks discusses the quick nature of the production, the challenges and benefits of shooting in the middle of a Texas summer.

Marked for Deathis a 16-minute interview with Actor Tyler Shea Cone. The actor discusses his casting and the production.

If Looks could Kill: The Return of a ChainsawMassacre is a 19-minute interview with Special Makeup Effects Artist J.M. Logan And Production Designer Deborah Pastor.  The duo is brutally honest about the production which was troubled to say the least.

Fans of The Next Generation are going to be head over heels with this newest edition.  Recommended.