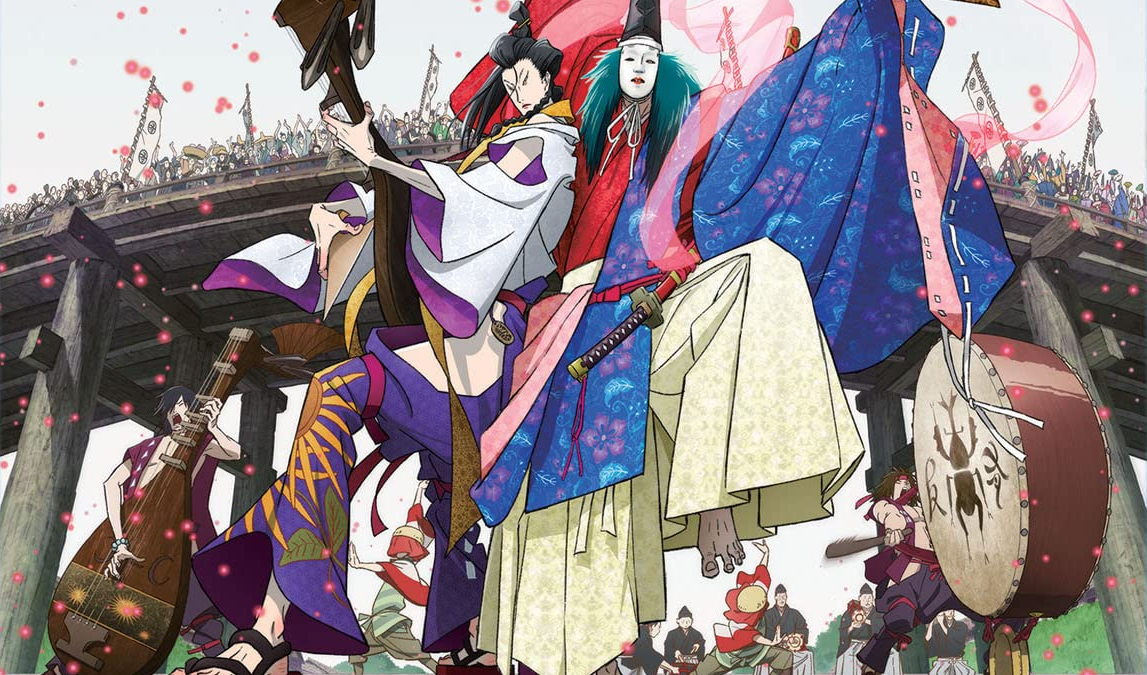 From Masaaki Yuasa, the director behind Mind Games and Devilman Cry Baby comes the musical legend Inu-Oh set in 14th Century Japan. New to Blu-Ray from Shout Factory and GKIDS.

Two friends in the middle of warring clans attempting to unify the Japanese empire are involved using Music instead of swords and bows.  Masaaki Yuasa’s beautiful Inu-Oh is a tragic tale of art, politics, and betrayal.

Tomona and Inu-Oh were causalities of the greater battle of the unification of the Japanese empire.  Tomona blinded, and his father killed, when his father touches the cursed blade of the murdered Child Emperor Antoku.  Inu-Oh, is a disfigured young man who spends his time alone, albeit alone with dogs, on the outskirts of society.  These two unlikely heroes by fate meet and begin to perform together.  Tomona with his guitar.  Inu-Oh through dance.  As they tell the stories of the souls lost in the Great War they not only heal those spirits but themselves.  Though the political maneuvering of Inu-Oh’s father and others plot to destroy Tomona and Inu-Oh’s rising storm of revolution.

For a film that deals with some fairly heavy topics, Inu-Oh is a joyous affair.  Director Masaaski Yuasa and screenwriter Akito Nogi have created a film that embraces the untold or suppressed history of feudal Japan not as a matter of “IMPORTANCE” but one of love and happiness.  As the film beings one can feel that this may be a dreary affair but as the music begins and the visual flourishes blossom one will be delighted by the fact it is anything but.  Rather Inu-Oh is a defiant punk rock opera as told in the only way that animation can.

As much as the storytelling is impressive the work done by Animation House Science SARU is even more impressive.  The hand-drawn style that invokes Japanese Water Color work melds perfectly with the story and music in a way that allows the film to push the boundaries into almost magical realism.

Inu-Oh in its end is a spiritual cousin to The Elephant Man and the work of Baz Luhrmann than it is of its animation contemporaries.  As bold as Luhrmann’s work and as humane and beautiful as The Elephant Man, Inu-Oh’s reputation like the other work of Masaaki Yuasa will continue to grow in esteem.

It’s almost an afterthought of how good the transfers that Shout/GKIDS are provided by the various animation studios.  Inu-Oh is as beautifully rendered on Blu-Ray as it looks to be on the big screen.  The beautiful “hand-drawn” animation style used by the filmmakers is a perfect example of why one must buy physical media and not watch a stream.  The animation in its fluid dream-like quality benefits from the verbose Blu-Ray bitrate allowing for a perfectly rendered image without any pixelation, ghosting, or blur that comes with watching something via a stream.  Inu-Oh in this Blu-Ray iteration is a prime example of how good a visual presentation one can get out of the format.

Interview With Masaaki Yuasa (12:02) – in this all-new interview with the director of Inu-Oh he discusses the making of this film.  Some of the details include the challenges faced by adapting the novel the film is based on, his collaboration with character designer Taiyo Matsumoto (whom he’s worked with numerous times), the development of Inu-Oh and Tomona’s modern look and design, the musical groups – specifically the Beatles and Deep Purple – he took inspiration from, a discussion of how the musical numbers were production and more.  Though only 12 minutes this fascinating look at this equally fascinating project is a requirement for anyone wanting to know more.  In Japanese with English Subtitles.

Q&A At US Premiere (13:48) – this Q&A was filmed at the US Premiere at the American Cinematheque back in August of 2022 at the Aero Theater in Santa Monica.  Dino-Ray Ramos hosts director Masaaki Yuasa and begins with his thanks to the audience and the pull he felt to tell this story.  Some of the other details include how he connected with the story to find a throughline for modern audiences, how they approached the design of Inu-Oh, a discussion of some of the most memorable reactions to the film at festivals, the themes of fame and identity, and much more.

Yuasa Draws Inu-oh (12:13) – in this wonderful feature director Masaaki Yuasa takes us through the motions of drawing Inu-oh in his multiple iterations.  This feature is similar to the one in Belle and other Shout/GKIDS discs and is a great inclusion, especially for those that are animators/drawers themselves.  In Japanese with English Subtitles.

Scene Breakdown (24:03) – in this featurette – which is almost a master class in animation – director Masaaki Yuasa breaks down individual scenes and how they were accomplished.  The scene that Yuasa decides to break down is the iconic THE WHALE SONG.  Discussing the various problems and goals that he wanted to achieve Yuasa does a marvelous job is giving us insight into the approach to animation.  Using an iPad allows Yuasa to point out “inflection points” and things that you wouldn’t normally notice.  Better than a commentary track this visual guide is again another way that Shout/GKIDS are imbuing their discs with the kind of special features that Animation Fans desire.  In Japanese with English Subtitles.

Inu-Oh is a special musical piece of animation.  Shout Factory and GKIDS have given it a worthwhile release.  Highest Recommendations!!!