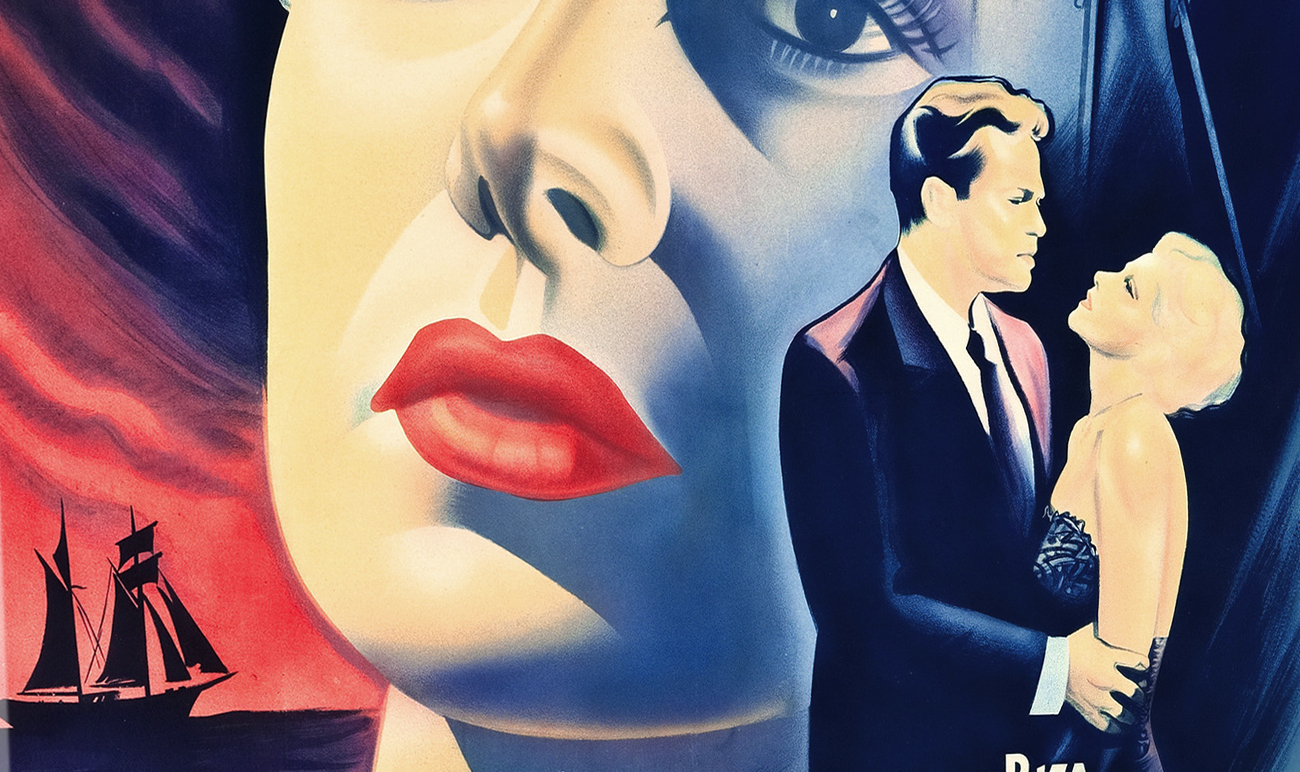 One of Orson Welles’s best The Lady from Shanghai comes to Kino Lorber on Blu-Ray with a great transfer and extras.

What this reviewer is always surprised by is just how overstuffed The Lady from Shanghai is.  Orson Welles’ noir is overflowing with story, more than films double its brisk 96-minute run time, going from acidic travelogue to forbidden romance to double-crossing noir to cynical courtroom drama.  All wrapped up in an amazing carnival of mirrors finale.

Lunkheaded Michael O’Hara (Welles) is just dumb enough to not see the warning signs when he first meets platinum blonde Elsa (Rita Hayworth) could be the end of him.  He’s smart enough to understand all the entanglements of taking a job with her infamous court lawyer husband (Everett Sloane) aboard their yacht as they travel around the Gulf of Mexico and eventually to San Francisco.  Still takes on the job on said yacht and gets himself embroiled in a quadruple cross setup that leaves him broke and a murder rap to beat.

Welles here as Writer/Director/Producer/Star is still in complete control of the medium.  The lean and economical runtime belies just how juicy and expansive this globe-trotting tale of crime and collusion is.  Each section of the film is a different genre but held together with the style of a film noir.  It allows everything and everyone to take on a tone that feels cynically funny and fun.  Whether its Welles’s own Irish Brogue narrating the entire enterprise or Glenn Anders’s drunken scheming lawyer or Sloane’s disabled lawyer who’s always two steps ahead – the film understands how to shift those troupes just enough to make them not only entertaining and fun but to throw a first-time viewer off.

The film’s famous hall of mirrors ending is still astounding and fresh as the day it was first seen by a general audience.  Though not because of how it was shot – impressively as it might be – but the lead-up to the finale.  Welles was accused of a great many things but not understanding how to construct a boldly told story wasn’t one of them.  By the bitter pill of an ending, you’re reminded of what being guided by the hands of a cinematic genius is like.

The Lady from Shanghai is as good if not better than the day it was released.

The transfer that was provided by Sony Pictures for The Lady from Shanghai is a knockout.  The clean and crisp image has no scratches, blemishes, or defects.  The contrast and black levels are perfectly balanced throughout.  The film grain is beautifully captured here with the no DNR present to kill the lovely patina that gives this Blu-Ray a filmic quality.  Bravo to Sony and Kino Lorber for taking pride and care of this important title.

The first of two all-new Audio Commentaries, this one by Film Historian Imogen Sara Smith who delves into “the weirdest great movie ever made” as she mentions another critic Dave Kerr called it.  Some of the details include a discussion of what Welles had initially planned with the opening – this opens a larger discussion of how this permeated Welles’s entire career, the war over Rita Hayworth on this film between Welles and studio chef Harry Cohen, its place in the Film Noir genre, the script and the novel it was based on – a larger discussion of the development of the material, an Errol Flynn cameo – if you can find him, the similarities to this and Out of the Past, the work of Everett Sloane, the musical number by Rita Hayworth – and why it is so very different from Gilda, the trouble with shooting on location in Mexico, the post-production and how it was mangled Welles’s themes and style, how Welles was influenced by The Cabinet of Dr. Calligari in this film – a larger conversation of Welles’s shift in tone and style in Welles later career, discussion of the nuclear fear that is imbued into the film, her thoughts about Welles’s performance, and much more. Smith gives us a great commentary track that not just gives us some historical context in Welles, Hayworth, and other careers but dives into what truly makes this film great.

The second of the two all-new Audio Commentary, this one by Novelist and Critic Tim Lucas begins with when the film released and its progenitor of the film.  Some of the details include the material that the film was based off of, Welles and Hayworth relationship – and how that effected the film, the actual production dates of the film – and a greater anecdote about the trouble post-production, the context of time of when The Lady of Shanghai was made in Welles’s career, the huge ordeal that the change in Rita Hayworth’s hair – both color and length – away from the her Gilda persona, the work of Glen Anders, the insistence by studio chef Cohen a musical number be added because of the Popularity of Hayworth’s musical numbers in Gilda, the production shoot on the yacht and who was the “skipper of the boat”, a side conversation about novelist Sherwood King, an outline of the novel’s plot – including review quotes about the novel, an interesting tidbit about the very famous director who first attached to the first version – which was an adaptation as a stage play, a side conversation about uncredited screenwriter William Castle – how Welles and Castle became friends of sorts and the dissolving of it as they began with The Lady from Shanghai, how Welles tried to get rid of Hayworth for his new “lover”/Actress, the lack of credit – both monetary and screen – for novelist Sherwood King, and much more.  Lucas brings all the deeply researched facts, quotes, and anecdotes he’s known for in other commentary tracks for The Lady from Shanghai.

The third commentary track is an archival Audio commentary by Filmmaker Peter Bogdanovich which begins with how he first met the great Welles and the book that he wrote about Welles that took decades to eventually be released. Some of the other details from the track include a huge number of quotes taken directly from his book and Welles’s thoughts about the film – all of which should be listened to as “performed” by Bogdanovich, the director also discusses his personal relationship with Welles and some great anecdotes beyond the film.  This personal track includes some great quotes and hilariously so – as Welles was known to be, and some great personal anecdotes about Welles from Bogdanovich. Without Welles being present for a track this is the next best thing.

A Conversation with Peter Bogdanovich (20:52) – in this archival interview from 2000, the late filmmaker/historian Bogdanovich discusses the history of the film.  Anyone who’s seen Bogdanovich talks about the film and specifically Welles, you will know the kind of great and informative interview you’re in for.  Some of the details include the fallout from Citizen Kane, how he got involved with Harry Cohen for $50,000 and a made-up novel called The Lady from Shanghai, William Castle’s involvement in the picture, Rita Hayworth’s casting and the trouble between Cohen and Welles, the casting of Everett Slone, Glenn Anders, and others, the horrendous troubles during the production, and much more.

Comments by Eddie Muller – there are three separate mini-interviews that amount to around 20 minutes in total.  Muller’s comments are vital in giving some information about this classic noir and what separates it from other even elite-class noir films.  Filmed at some TCM Event or for a special on the channel.  Each section discusses a topic.

The Lady From Shanghai remains one of Orson Welles’s finest films.  Kino Lorber has provided a wealth of arresting extras and a beautiful transfer.  HIGHEST POSSIBLE RECOMMENDATIONS!!!