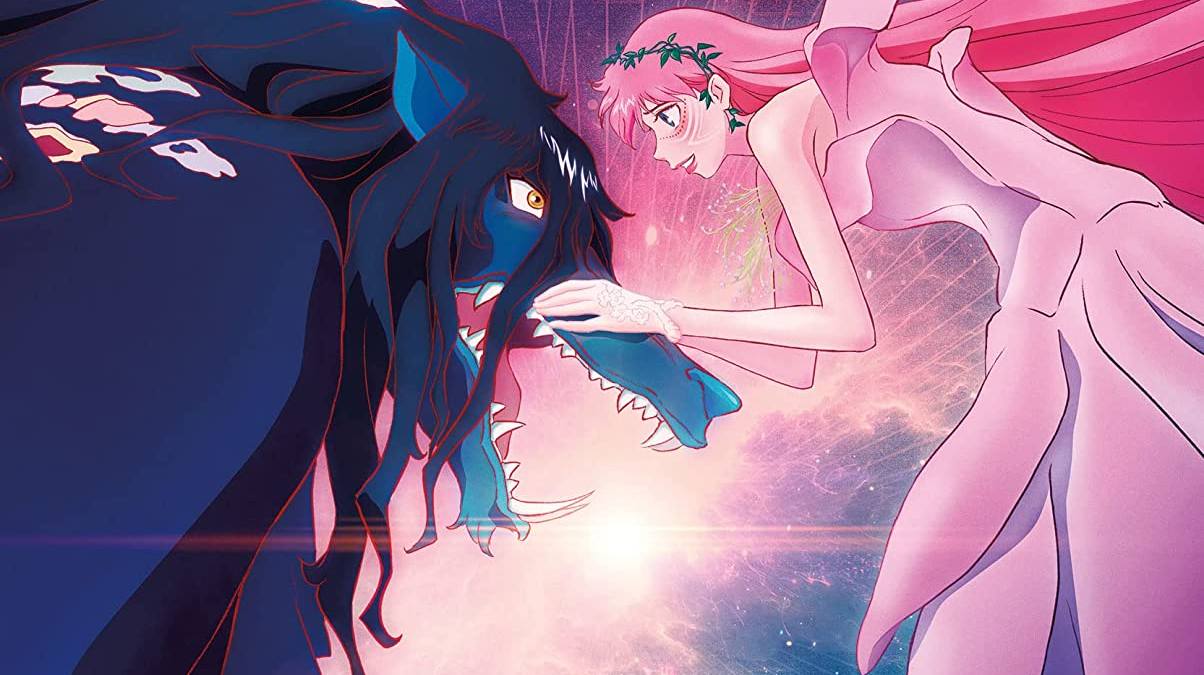 The Visually Stunning Belle gets a new 4K UHD Dolby Vision Encoded version courtesy of Shout Factory/GKIDS with some new features not included on the original Blu-Ray release. The result is one of the best 4K UHD’s of 2022.

The U is the newest in social media and virtual reality.  Using your biometrics, it creates and living breathing avatar in the digital world.  Suzu a sad young teen on a whim creates an avatar.  Through her avatar named Belle, Suzu is able to gather the strength she did not know she had.  Strength to face her own demons.  Strength even to help others with their own demons, though ones that are very real.

Belle begins as a clever play on the Beauty and the Beast mythos but slowly and surely turns into something altogether more powerful.  It would be enough for Belle to turn into a young woman fighting the depression and sadness of a horrifying tragedy.  Belle goes farther.  It shows the strength of a young woman who grows into someone who shows true courage.  Not the time of courage to swing a fist but strong enough to take one.

Writer/Director Hosoda understands without the emotional throughline the film is nothing more than empty visual splendor and music.  Hosoda shows that he understands the power of his visuals and also the power of music.  Part of the beauty of Belle is that Hosoda understands the toxicity of the internet, but he also is a humanist that believes in people.  That is on display throughout Belle and makes it one of the more accurate depictions of the internet.

Belle at its end is an emotionally powerful film. One that believes in humanity and what real strength is.

My original thoughts on the Blu-Ray:

The film’s beautiful animation makes it to Blu-Ray in a near flawless reference quality transfer.  The image is sharp and handsome, and the color reproduction pops.  The 3D rendering suffers no ghosting or any other artifacting issues.  Shout/GKIDS brings the same kind of attention they’ve brought to their work with Ghibli or the work of director Kon here.  Animation fans will be pleased and delighted that Belle makes its transition to home video without a hitch.

My thoughts on the upgrade to 4K UHD:

This Dolby Vision/HDR-10 encoded UHD disc is everything the Blu-Ray was and more.  The color and contrast levels have been given further depth by the Dolby Vision encoding.  That makes it an all-around darker and bright image.  The image is flawless, sharp, and without any issues or inconsistencies.  The level of detail in the image surpasses the Blu-Ray and noticeably so.  One can watch the finale with literally thousands of characters populating the screen and see the noticeable difference between the UHD and Blu-Ray.

EXCLUSIVE TO THE COLLECTOR’S EDITION: the packaging includes a 60-Page Book, Poster, 6 Art Cards, and a Sticker

Having received this full retail version I can say that Shout/GKIDS have really outdone themselves with the quality and content. The package and contents are not just quality items but their considerate to the film itself. It’s well worth investing or double-dipping for this edition beyond just the upgrade to 4K UHD, which in itself is worthy of the upgrade alone.

DISC 3 [THIS BONUS DISC TO THIS COLLECTOR’S EDITION]:

Behind The Japanese Dub (41:31) – is a behind-the-scenes look at the Japanese voice cast led by director Hosoda as they work through their performances.  This is a fascinating look at something we rarely see, the voice actors being directed by the animation director.  The access that they have is unparalleled as they work through the film.  The featurette alternates between on-camera interviews and the b-roll footage commenting on the process itself and working with Director Hosoda.

Promo Events With Hosoda And Cast (40:27) – this featurette expands on the look at the promotional tour that The Making of Belle on the Blu-Ray Disc one only touches upon.  The footage is from the Premiere, special fan event screenings, and the Completion press conference.  The cast and crew do speak at length about the making of the film, the challenges, working with director Hosoda – some multiple times, what they feel makes Belle such a special film and more.  It should be noted that these Q&A are not your typical American Q&A and have very thoughtful questions aimed at the cast and crew.  Japanese with English Subtitles.

Interview with Takeru Satoh (6:02) – is an interview done during the post-first screening Q&A sessions with the actor who plays Dragon.  The questions are displayed from an on-screen prompt including his thought on his character, the context of what he knew when he was performing the role, and much more.  Japanese with English Subtitles.

Eric Wong Interview (26:33) – is an interview hosted by Jonathan Clements with Eric Wong – who is also joined by director Hosoda.  Filmed via Zoom the conversation is about Wong’s contributions to design work for the social media platform “U” that is at the center of Belle.  The conversation highlights include how Hosoda – who lives in Japan – and Wong – who lives in the UK – found each other, how they began to work together, the script development and working in that context, the international approach to development and design – something not done in Japan in the Animation studios, the challenges and evolution for director Hosoda from 2D animation into 3D animation, how the “U” and design actually worked as created by Wong and the work done with Hosoda on this, and much more.  English and Japanese with English Subtitles.

The Making Of BELLE (44:05) – this making-of, narrated in English, is divided into 10 chapters that cover all aspects of the film from the concept to the casting of voices to the animation, the production having to deal with the rise of COVID, and much more.  Like other making-of out of Japan, the focus on the process is truly wonderful giving us access to how this 5-year-long production.  Smartly, the producers have included a lot of popup information that is crucial to giving us context on how the production was made.  Japanese with English Subtitles.

A Conversation with Director Mamoru Hosoda (29:13) – this interview with writer/director Hosoda in place of a commentary is great.  The interview delves into the project from Hosoda’s perspective.  Divided into three chapters; Beginning the Process of Creating Belle, Challenges in the Creation Process, and The State of the Animation Industry.  These three topics manage to pull out a lot of Hosoda’s thoughts not only on the story, characters, and themes he dealt with in Belle but also the challenges of making the film and much more.  Japanese with English Subtitles.

The Music Of BELLE (15:32) – a fascinating interview Music Director/Composer Taisei Iwasaki, composer Ludvig Forssell, and music supervisor Taka Chiyo begin with how they all came together.  Some of the details include how they needed each other to create this very different film, how they brought everything together and collaborated, how one of the most impressive and emotional moments came through because of the issues with COVID and bringing everyone together, and much more.  Both English and Japanese with English Subtitles.

Finding The Voices Of BELLE (11:49) – a featurette looking at how the English dub for Belle was created.  Hosted by the producer of the English dub Dave Jesteadt the featurette discusses the challenges inherent in translating a film that Music plays an integral part.  The featurette contains some great b-roll footage of producing the English language tracks something you don’t often see.  Featuring comments by voice director Michael Sinterniklaas, casting director Stephanie Sheh, and voice of Suzu/Belle Kylie McNeill.

Scene Breakdown: The Station (10:37) – writer/director Hosoda dissects the Train station scene that happens towards the last half of the film when it’s revealed that one character has feelings for another.  Hosoda discusses the animation, the themes, and the way the character is portrayed.  Japanese with English Subtitles.

Scene Breakdown: The Ballroom (12:06) – writer/director Hosoda dissects the mid-film Ballroom scene where Belle sings to the Beast/Dragon.  Some of the details include that he doesn’t consider the film a musical but has musical elements, the work capturing emotion on Belle’s face, the importance of the chandelier in the scene, how the scene references the Disney Beauty and the Beast, the small creaturs/AI that Dragon has created around him, and much more.  Japanese with English Subtitles.

Hosoda @ Animation is Film (18:05) – an informative double Q & A with writer/director Hosoda during the Animation is Film Festival 2021 where is played.  The piece is artfully edited together with one of the Q&A moderated by Leonard Maltin.  Some of the details include where the idea spouted from, how the framework of Beauty and the Beast came about, the power of the 1991 Disney Film for him as an animator when it was initially released, and how the Coceatu version of Beauty and the Beast was just as seminal for him, the themes and why he chose children/teens as his main protagonist, and much more.  Not subtitled but Hosoda does speak through a translator.

Hosoda Draws Belle (8:50) – writer/director Hosoda describes the sketch as he draws.  GKIDS has cleverly decided to do a popup video style for this interview that always shows you his drawing while also showing his face.  The work starts as a sketch but Hosoda fills in the drawing with coloring also making sure that he lets the audience know the meaning behind coloring and design. Japanese with English Subtitles.

Kylie McNeill Performs “Gales of a Song” (2:37) – a beautiful intimate recording of the main theme of the film.

Design Gallery (13:57) – this 165-image still gallery is a wonderful look at the various characters and their development/design for the film, actual sketches, background work, the concepts for the U, and much more.  The image gallery can be navigated using your remote’s pause, play, and chapter stop buttons.  The gallery will also play automatically if not controlling it.