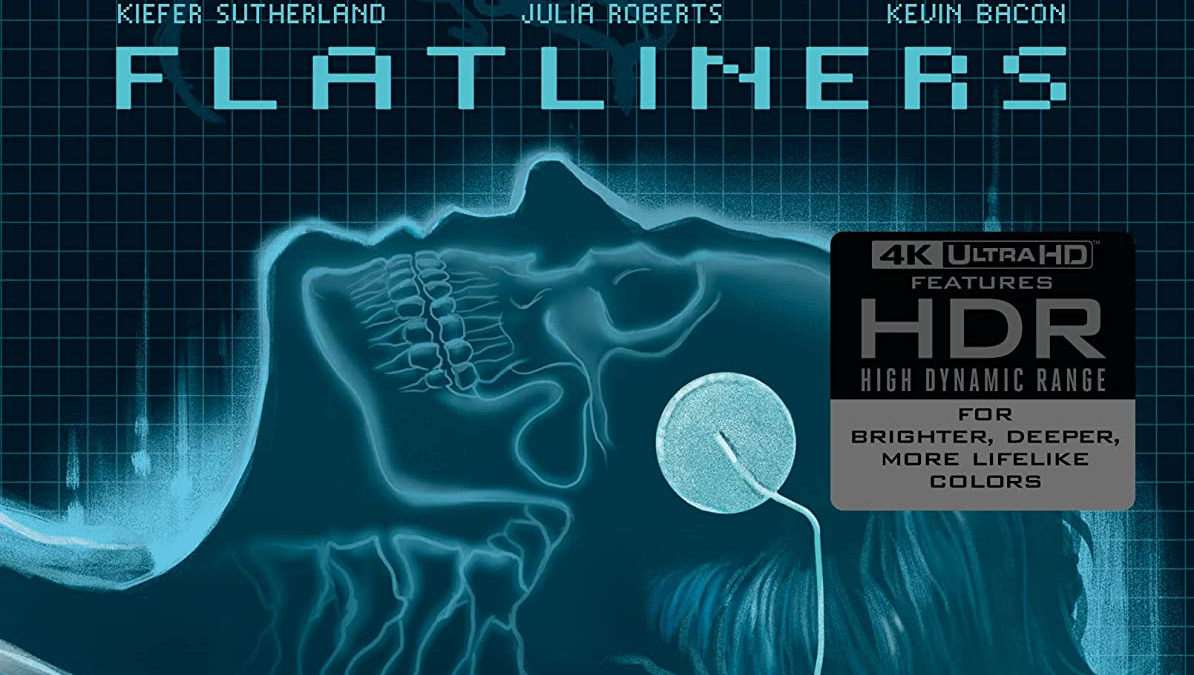 Flatliners, the Joel Schumacher directed horror film gets the 4K UHD deluxe treatment by the fine folks at Arrow Video.  The results are a visually stunning packed special edition.

Can we all agree that Director Joel Schumacher has been unfairly shit upon for far too long?  Even after he came out of the hell hole that was Batman Forever and Batman & Robin he was still the butt of so many jokes.  Even with great genre fare like 8mm, Tigerland, Phonebooth, and Blood Creek (the last of which is a truly undiscovered gem of an action horror film). Before the Batman debacles, Schumacher was an ace visualist that always loved a good high concept that he absolutely knew how to execute.

Flatliners is the type of high-concept horror film that could have only been made at the beginning of the 1990s (see the remake for proof of failure).  The concept wreaks of 90s script development.  The kind of concept that was probably – on paper – was a $100 million dollar project that was pared down to accommodate a budget that would be reflective of the young actors they cast… well before their stardom.

Hotshot Medical students looking to make a name for themselves decide to tempt fate and kill themselves to see if there is an afterlife. The team is led by sociopath Nelson Wright (Kiefer Sutherland whose character could have been a mold for Jack from 24) who’s a former bully.  You have troubled Rachel Manus (Julia Roberts) who has an unhealthy relationship with the afterlife – with good reason.  David Labraccio (Kevin Bacon) brilliant but arrogant suspended Med Student.  Joe Hurley (William Baldwin) proto new era pornographer who hides his camera from the young women he sleeps with.  Rounding out the team is Randy Steckle (Oliver Platt) as the portly comedic relief and semi-conscious of the team.

These Med students traverse the afterlife with very troubling results, with the sins of their lives coming to haunt them in various forms.  As they attempt to figure out how to make peace with what they’ve brought back with them Nelson’s time is quickly running out with a murderous spirit after him.

Schumacher’s film – shot by the illustrious Jan De Bont – is as slick as a 35mm shot horror film of the 1990s.  The visuals and style overtake any of the sort of nightmare dream logic that overtakes the film.  Even now the Giallo-inspired lighting, editing, and general mood still delight even now.  They far outweigh any of the narrative heft, or more importantly lack thereof, that’s inherent within the script.

A match to the visuals are the performances by a who’s who of ‘90s superstars.  All understand that the material is overwrought in the way that many horror films of the era are. Yes, there are screaming matches and arched performative moments to be sure but even at this point, they are all locked into their specific gifts as actors.  Sutherland and Bacon are chewing scenery like they’re in a courtroom drama, and the film is better for it.  Platt never met a supporting role that he didn’t imbue with his specific charms, here is no different.  Baldwin was cast to his specific charms of the era (see Silver seven years later for the type of performance).  The one that’s lost is Julia Roberts, not for anything she’s done, but because the script gives her nothing to do but to pout and cry.

Ultimately, Flatliners is a thoroughly fun ride as long as one doesn’t look too hard at the overall package and can forgive the film of some of its more troubling aspects (see Baldwin’s characters arc – though to be clear this film never endorses Baldwin’s characters’ actions).  The visuals still stand as a great throwback to the Giallo’s of the 1970s.

The brand new 4K restoration from the original negative, approved by director of photography Jan de Bont is a stunner.  This Dolby Vision and HDR10 encoded image will delight fans of the film.  The sharp image boasts a huge uptick in quality from all previous editions of Flatliners.  The film that’s shot primarily at night is a beautiful example of the dynamic range the contrast levels, color reproduction, and black levels have on this format. The image is much darker than in previous editions, but the range of those blacks are stunning.  The information that can be read during the low-lit scenes is an astounding and prime example of what exactly a 4K UHD can do.

The all-new audio commentary by critics Bryan Reesman and Max Evry opens with both Reesman and Evry discussing the opening that features the massive sculpture that ties to the film’s themes.  Some of the other details include Schumacher’s change of the film’s location to Chicago, the university they used for the production, how Julia Roberts ended up in Flatlinersand some of the roles she passed, or they passed on her, how screenwriter Peter Filardi came up with the concept of the movie, how Schumacher and cinematographer De Bont came up with the visual style, the career of Billy Baldwin that lead him to be cast in the film, a discussion of the Brat Pack and Schumacher’s part in that group of actors, the interesting life and career of Joel Schumacher before directing and how he got to directing including this film, the work of Jan De Bont here and eventually work as a director and his influence on Action Films, the success of the film, the differences between the original and the remake, the bidding war over Filardi’s spec script, a larger discussion of how bidding wars happened and worked during the era and some of the biggest sales of the time, a discussion of the smaller roles populated by Hope Davis and Julie Warner, a discussion of how Oliver Platt was cast in the film and how the role was cast with Diego Luna in the remake, some great visual references to John Constantine, a discussion about the differences between Flatliners and Jacob’s Ladder (which was released the same year), the box office success of the film, a discussion of Flatliners as a horror movie and not a “thriller”, a side discussion about Kiefer Sutherland and The Lost Boys directed by Schumacher, a planned sequel that was developed but never came to fruition – including a discussion of a plot of sorts and who came in to write it and the reason why it collapsed, the research that Filardi did for the script with people who died and revived, and much more.  Reesman and Evry deliver an interesting and entertaining commentary track.  They both deliver a track filled with quotes from articles about the film at the time and post-release.

The Conquest of our Generation (19:11) – is an all-new interview with screenwriter Peter Filardi.  The screenwriter discusses how selling a MacGuyver script and a Writer’s Strike led to the spec script for Flatliners.  Some of the other details include the inspiration for the script, the reaction to the script after he finished writing, his account of the script sale, the development of the script, the quickness of that process, his views on the production and Schumacher, his relationship with Schumacher and his thoughts on what the script was about, the casting of the film and much more. There are some great clips of the original spec script by Filardi.

Visions of Light (18:23) – is an all-new interview with director of photography Jan de Bont and chief lighting technician Edward Ayer.  De Bont and Ayer provide a great technical interview about the visual style of the film.  Some of the details include how he became attached to the film and his thoughts on the initial script, meeting with Schumacher for the first time and discussing The 4th Man (the Verhoven classic he shot), their plan to shoot the film, and what was Schumacher’s hope, working in Chicago, a discussion about how on a film the visual style and the key departments that are involved, a discussion of the various team members that make up of the Camera Department, a discussion of style over realism with lighting, and much more.  De Bont and Ayer are recorded separately but also comment on each other’s talking points.  There are some great visual examples of what de Bont is talking about throughout the interview.

Hereafter (14:22) – is an all-new interview with first assistant director John Kretchmer.  The First AD gives us a very interesting technical interview about the production and what he did.  Some of the details include his origins working in theater in Chicago and his transition to California and Film production, a nuts-and-bolts discussion of what ADs do and how they relate to the Director, a discussion of the production and script, working with de Bont, working with production designer Zanetti, and much more.

Restoration (10:47) – is an all-new interview with production designer Eugenio Zanetti and art director Larry Lundy.  The Production Designer and Art Director give us another technical-based interview.  Some of the details include Zanetti’s beginnings in the theater in Argentina and eventually working with director Pier Paolo Pasolini, working with Schumacher and eventually on this project, how he approached the design, how Lundy was hired on, the work Lundy did on the film, the troubles with some of the production choices, and more.  Note that Zanetti and Lundy are recorded separately. There is some great video of the locations and what they look like currently.

Atonement (11:35) – is an all-new interview with composer James Newton Howard and orchestrator Chris Boardman.  Some of the details include the “strange” reasons that Schumacher hired Newton-Howard, a discussion of what an orchestrator does, how Boardman got the job on Flatliners, a way that Newton-Howard and Boardman collaborated and worked on Flatliners, and much more.  This musically technical interview is very interesting in how they enlighten on how a score is built.  Note that Newton-Howard and Boardman are recorded separately.

Dressing for Character (6:26) – is an all-new with costume designer Susan Becker.  Some of the details include how she came to work with Schumacher on St. Elmo’s Fire, her thoughts on Flatliners and how that informed her in dressing the various characters, costuming the bonfire/Halloween sequences, and much more.

Image gallery – consists of 12 production stills and actor publicity stills from the film.  The images can be navigated by using your Next and Back Chapter Stop buttons on your remote.

Flatliners is a horror classic.  Arrow has treated it as such with this great 4K UHD edition.  High Recommendations!!!