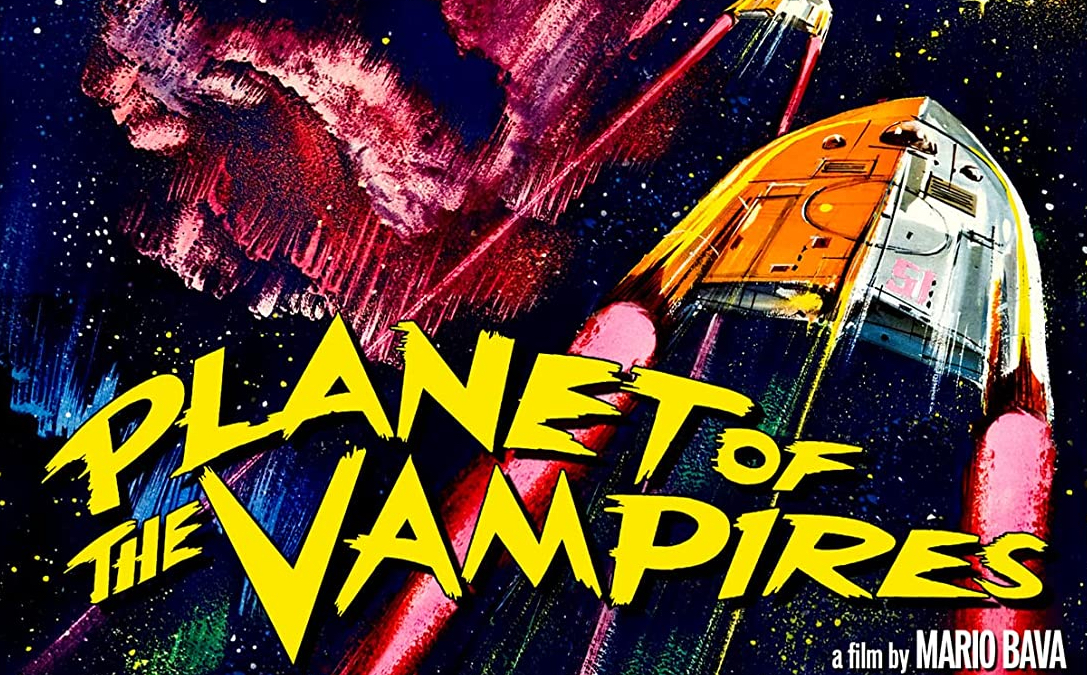 Mario Bava’s highly influential Planet of the Vampires is back in print on Blu-Ray with a new 2K Master and loaded with special features from our friends at Kino Lorber.

I still remember the first time I saw Planet of the Vampires.  I was in college. DVD had become a thing.  Bava came onto my radar because of Guillermo del Toro’s constant comments about the director in interviews and commentary tracks.  I sat down to watch it and slowly but surely the thought came over me that I had seen this film before.  It was only after the credits rolled, I figured out that the plot was lifted by Dan O’Bannon and Company for Alien.

The film begins with a crew of a spaceship landing to investigate a distress signal.  They soon come in contact with a hostile alien that takes over a host’s body once they fall asleep or die.  The crew one by one is taken over by the aliens who have spent thousands of years waiting for this moment.  Can the remaining few crew members escape the planet of vampires (probably more like a viral-based lifeform).

Though, unlike the Ridley Scott 1979 Classic, Bava’s film has a cynical edge, that doesn’t end well for anyone.  A cynicism that feels like a cousin to Siegel’s Invasion of the Body Snatchers. Where no matter what you do, no matter how good a fight you put up… you are going to lose to superior beings.  That cynicism produces a film that has aged quite well.  Though many of Bava’s films never feel like stodgy affairs because of the cynicism so prevalent in them.

The cynicism along with the stunning visuals create an experience that transcends.  Though the film is goofy in places the visuals and how much in-camera FX work that’s beautiful and considered in a way that many other – more expensive – studio sci-fi fare never could be.  Longtime Bava collaborator Cinematographer Antonio Rinaldi bathes the film in psychedelic colors and atmosphere that pops off the screen.

Planet of the Vampires isn’t just a forgotten gem – Bava fans would kill me for saying that – but it’s essential highly influential science fiction cinema.  One that we are still feeling the ramifications of six decades later.

The Brand New 2K Master is a beautifully sourced image.  The film looks stunning on Blu-Ray on this upgraded master (there was a prior release back in 2014) and compression technology has given this a marked uptick in quality. The color reproduction here is beautiful, with the disc never showing any signs of bleed through even during the most hallucinatory color-tinted scenes.  All around this sharp image has nary a blemish or scratch on it leading to the best the film has ever looked on home video.  Bravo to Kino Lorber whose hard work has paid off with a truly great transfer.

The all-new Audio Commentary by Novelist/Critic Kim Newman and Writer/Journalist Barry Forshaw is a winner.  The duo opens their track with the various versions – some lost – or as they say “polyglot” including a discussion of director Bava’s time working with AIP.  Some of the other details include the development of the script based on the Renato Pestriniero story “One Night of 21 Hours”, how Ib Melchior got involved in the production, the striking costumes and their influence on X-Men (2000), a great conversation about the influence the film has on Star Trek, why Louis Heyward came on as a writer and producer, this leads to a side conversation about AIP and some really great anecdotes on how difficult it was to work within constrains (not just budgetary), a full and great discussion of the film’s influence on Alien and specifically who would have seen this film and Bava in general, a discussion of poster art for the film which leads to a greater discussion of the poster art for lower budget production house like AIP, the connection to The Forbidden Planet, a side conversation about sci-fi films before Star Wars and Post-Star Wars, a discussion about the age differences between the male and female leads which leads to a bigger conversation about the sexual politics of Hollywood films in this era, will younger people connect to a film like this in the modern era, and much more.  Newman and Forshaw create a track that’s fun, informative, and more of a conversation (but an extremely knowledgeable one) about this film.  There is no overlap with the Tim Lucas commentary track included here.

The second Audio Commentary by Mario Bava Biographer Tim Lucas is an archival one recorded during Mario Bava’s 100th birthday in 2014.  Lucas opens with some production details like budget and production time frame.  Some of the other details include Carlo Rambaldi, how many of the in-camera FXs were achieved, a detailed account of the various actors that worked on the film like Barry Sullivan, Evi Marandi, Norma Bengell, and others, a discussion of the original source material that the film claims to be adapted from, various production anecdotes, the various titles the film went under during production and release worldwide, and much more. Lucas like his other commentary tracks brings an authoritative, informational, and engaging track filled with some great quotes from various sources like interviews, books, production notes, and more.

Alternate Music Score Highlights (20:30) – this is the score that AIP placed in the film.  The video sourced from a SD sourced copy, the music is… different to say the least.  If anyone is curious about the amazing work that’s been done on the transfer only need look here.

Original Italian Opening Credits (2:49) – the original opening title sequence from Italy is a stark black and white font text opening, not the beautiful color version that accompanies the AIP/American release.

TRAILERS FROM HELL with Joe Dante (3:47) – the legendary director provides an introduction about Mario Bava and a hugely informative mico-commentary for the trailer.

TRAILERS FROM HELL with Josh Olson (2:28) – the Oscar Nominated screenwriter and Dante Podcast Co-Host (The Movies that Made Me – which if you don’t listen find it and do so) provides an introduction and a micro-commentary for the trailer.

Kino Lorber has treated Planet of the Vampires with the respect it deserves with this fantastic set.  Highest possible recommendations!!!