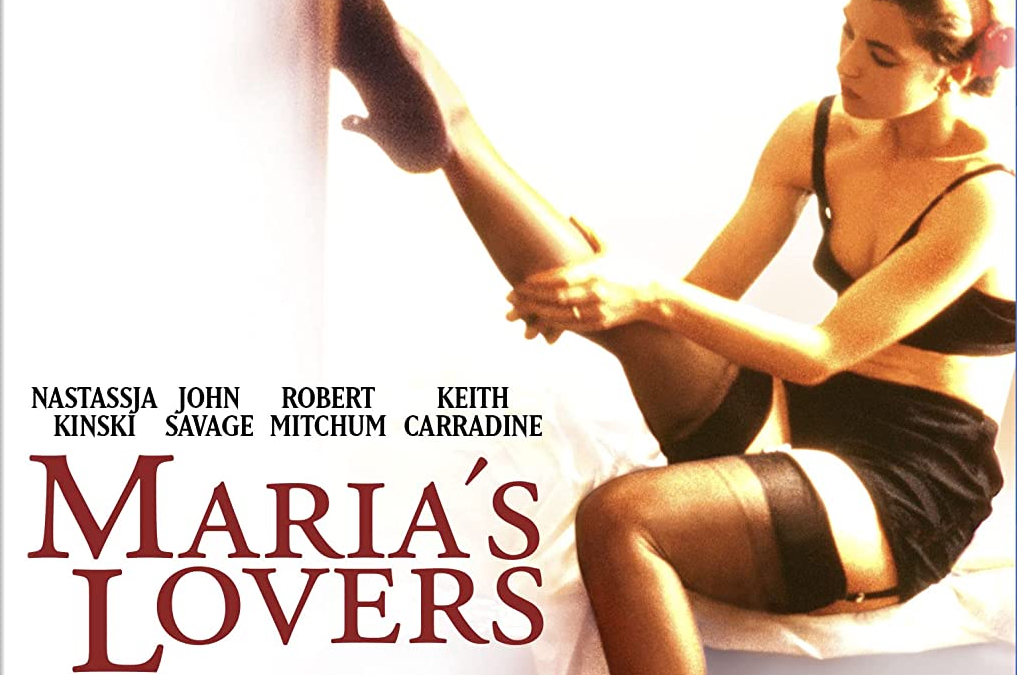 Maria’s Lovers is an overwrought romantic melodrama one would think belies the Cannon dictum of bigger-louder-more-explosions.  You would be wrong as the explosions here are the emotional ones rather than the flaming ones.  Though many think that melodrama is a bad word, here it is not as what you get is one of the more artfully adult melodrama.

John Savage and Natasha Kinski play star-crossed lovers in Post-War America of the 1940s.  Part of the adroitness of the story is the way that it creates more realistic obstacles that stand in the lovers’ path.  Savage’s Ivan is a war hero suffering from PTSD unable to love Kinski’s Maria in the ways any woman would need.  Jealousy and sexual frustrations abound and push them apart though, in Maria’s Lovers, it is never as simple as “woman cheat/man jealous” as many of these films are or even the title indicates.

Co-Writer/Director Andrei Konchalovsky shows an uncommon touch of sensitivity and cerebral that isn’t really present in movies of similar ilk.  The way that he and fellow co-writers Gérard Brach, Paul Zindel, and Marjorie David create characters that are not fodder but fully dimensional people is where the film draws its power and accuracy.  There are moments like the emotional explosion at an engagement party that one thinks is going to end in a physical altercation between Savage and Vincent Spano’s Al. It does but not in the way you would ever think.

The impressive all-star cast includes Robert Mitchum, Keith Carradine, Bud Cort, John Goodman, and Anita Morris deliver at every turn.  None of the actors coast here.  Even Goodman in a small supporting role – almost speechless – gives a full-blooded performance.  Konchalovsky gives the actors enough space to inhabit the frame and interact in a way that never feels like it’s staged or contrived.

Ultimately, any romance falls on its leads.  One would not immediately think of Savage and Kinski as a couple.  The actors deliver on their chemistry with truly wonderfully emotionally honest portraits of a couple fluxing in and out of emotional turmoil.  What could have been a series of ticks and mannerisms, Savage brings a different shade to the PTSD than he had in Deer Hunter.  Kinski delivers the goods as well in what could have just been a “sex kitten” role.  Here as Maria there is an actual deeply rooted emotional arc that happens that Kinski manages to bring her considerable – and highly underrated – talents to.

Maria’s Lovers is an unexpected romantic melodrama.  One that’s light on the melodrama and heavy on the complexities of emotionally damaged men and women.  This is a film well worthy of rediscovery.

The transfer provided to Code Red/Kino Lorber is a winner.  The image beautifully represents the image shot by cinematographer Juan Ruiz Anchía.

Interview with Actor John Savage (5:48) – in this all-new interview Savage discusses how he got the film through Cannon films and director Konchalovsky.  Of course, there’s a great Golan and Globus story.  Savage is great at recalling details from the production and the work that he did.

Interview with Actor Vincent Spano (15:34) – in the all-new interview with Spano beginning with having read the script and the details of the film that attracted him to the project.  Of course, there’s another Golan and Globus story.  Spano discusses working with the cast, crew, and director Konchalovsky.  The actor like Savage is great at recalling some truly wonderful details and anecdotes from the set and the experience.

Maria’s Lovers is an undiscovered gem that Code Red has given the film the best foot forward.  Recommended!!!