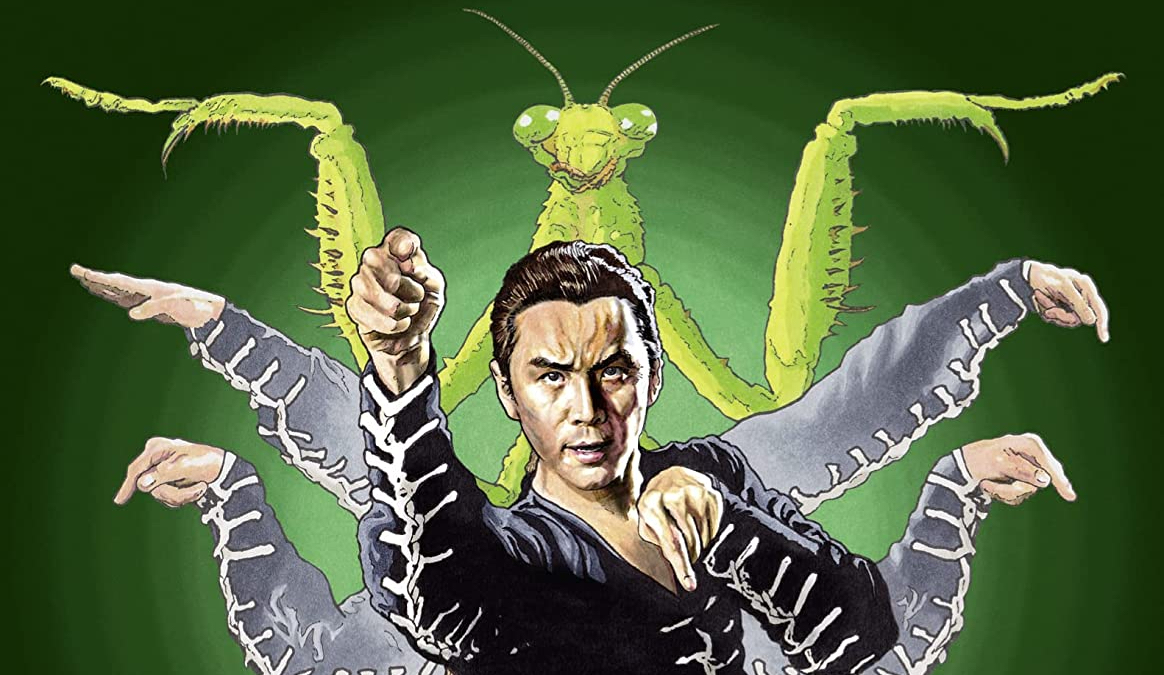 Just because Shaolin Mantis over the course of its runtime is light on action does not make it any less engrossing than its fellow Palace Intrigue brethren.  Make no mistake it’s because of its reliance on character development, plot, and romance that elevates it beyond the doldrums.

The Emperor of China tasks Wei Fung (David Chiang) with getting information to quell a rebellion.  If he does not within a certain time his family will be jailed, tortured, eventually executed.  Wei Fung finds himself as the teacher to an unruly female student (Lily Li) and his way into the Rebellion’s Mastermind’s graces (Lau Kar-wing).  As time closes in on the spy he embroils his student, now wife, with devastating results.  Disgraced and hopeless it is during his breakdown he finds a possible way to exact his vengeance.  That way… the creation of a new Kung-Fu; Mantis style!!!

Shaolin Mantis plays as much as a spy-film/deep cover films as it does a traditional martial arts film.  Characters put into situations by authority figures forced to do things they don’t want to do are a staple in films like Hardboiled, Deep Cover, or even Infernal Affairs and its remake The Departed.  Shaolin Mantis like those films so the cost, albeit less complexly as those films, that betrayal comes at.  In fact, the character is more akin to Tony Leung’s in Hardboiled a man who is not entirely good but isn’t entirely evil.  Someone whose desperation to survive costs him dearly.

Director Lau Kar-Leung understands that the drama that unfolds after the initial opening action sequence (featuring a cameo by none other than Gordon Liu) is not just necessary its vital to the film’s success.  As we watch relationships unfold, it only heightens the inevitable tragedy that does occur and sets the stage for a final third act.  A third act that’s powerful not because of the amazing action sequences but because it’s earned.

Shaolin Mantis kicks ass in an entirely different way than most Shaw Brothers productions.  The weight it gives its characters and relationships over the fight set pieces creates a film uncommonly effective.  Elevated beyond the impacts of the physical blows that are occurring on screen.

The transfer is beautifully rendered on Blu-Ray by 88 Films. This is one of the Majestic Film transfers, so the original coloring and titles have been replaced by newer cleaner ones.  The handsome sharp image is as clean and flawless as the day it was produced. Many will critique the grading on the transfers but what we get in return and the fidelity of the image is just too good in a way that any of the Shaw Bros Studio films have looked.  Shaolin Mantis was a stage-bound production and the perfection of the stage lighting and photography is only more refined here in high definition. 88 Films continues its vital work of curating Asian Genre films both popular and obscure.

The all-new audio commentary with Asian cinema experts Mike Leeder and Arne Venema return for another entertaining and informative track about Shaolin Mantis.  Some of the details include a discussion David Chiang, opening title sequences influence on Rap Music, Mantis-style as an actual Martial Arts, Gordon Liu’s cameo appearance, the rebuilding of the Shaw Bros studio, the dialog heavy first third of the film after the initial action heavy opening, Lung Chang being involved with The Matrix, more context and history of Shaw Brothers and their contract players and directors, context for the lack of availability of older titles in Hong Kong, why Shaw Brothers never got to sign Bruce Lee, the difficulty in writing and speaking Cantonese, HK Stars love of The Sound of Music, the singing styles of Sammo Hung (who’s not in the film), the film being comparative to a Spy Film, a discussion of the infamous Black Ninja series (which is still unavailable on Home Video), sound design in the past and modern-day sound design, the work of Lily Lu, the work of cinematographer Arthur Wong, a discussion of opium pipes, the lack of speed up frame rates on Lau Kar-Leung films, how extended and talented family members from Lau Kar-Leung was, a discussion about Mantis-style and the “training montage”, the final fight scenes and much more.  As with their track for Flag of Iron (also from 88 Films), Leeder and Venema give us a highly entertaining and informative track.

The all-new audio commentary with Asian cinema experts Frank Djeng.  Djeng begins with his qualifiers such as his work with Tartan Entertainment as producer, NY Asian Film Festival as the Co-Programmer.  Opening with a burst of information during the opening credit sequence and doesn’t let up for the rest of the track.  This commentary is a more scholarly track with information such as production dates, box office results, cast, crew, and much more.  Some of the other details include the work of Lau Kar-Leung in this film and its development, Kar-Leung’s history and career as a filmmaker, some great discussion on why films are dubbed in Mandurian or Cantonese, a detailed account of the era that the film takes place in, the various actors that appear in the film, the behind-the-scenes crew that went onto greater roles in HK Film, a detailed account of Shaw Brothers Production, and much more.  Djeng’s scholarly commentary is always fun and witty when always deeply researched.

Complicated Families – David West on Shaolin Mantis (13:52) – West brings his deep understanding of Martial Arts films along with historical and political context for this interview about Shaolin Mantis and the sub-genre of Martial Arts Houses and Families at war.  Some of the details include the multiple titles in different territories, the script by On Szeto, which he calculates (from a book) that the screenwriter wrote over 1,000 scripts in his lifetime, the political context of the story in history, the director’s Lau Kar-Leung filmography, the kung-fu manual as McGuffin, the downbeat tone as it compares to Heroes of the East (which is very similar), and much more.

Interview with Actor John Cheung (20:35) – Cheung’s archival interview covers a lot of his career including where he began, his first work as fight choreographer, and much more.  Cheung’s discussion of how things work on an HK Production is fascinating to anyone that loves martial arts films.  He does do a fairly detailed account of his and others’ work on Shaolin Mantis.  In Chinese with English Subtitles.