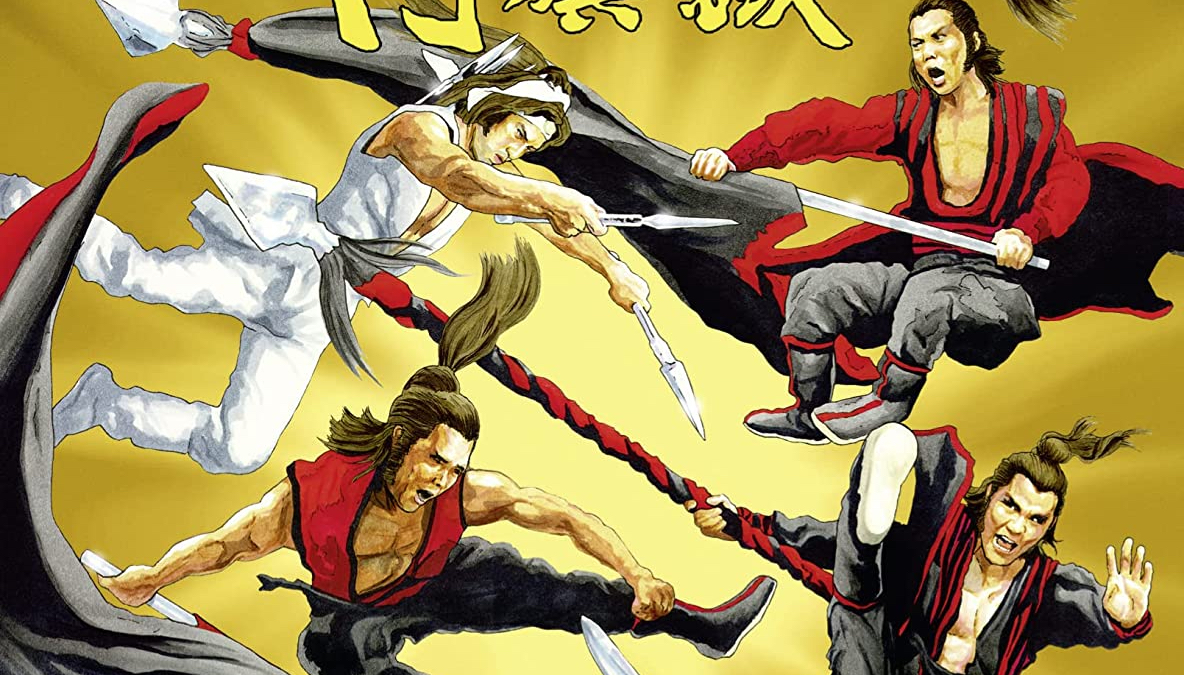 Murder and deception are the order of the day in The Flag of Iron.  Director Chang Cheh is at it again with a great potboiler of a martial arts film.

The Iron Flag Clan is one of the prides of the land.  Their Kung-Fu is very good.  Their students take pride in their skills with their flag spears.  So, it was inevitable that their master would be assassinated.   No one counted on the authorities pinning it on Brother Lo (Phillip Kwok) when in reality it was Chow Feng (Li Wang).  On the run and in hiding it’s Lo’s (real) brother Iron Monkey (Sheng Chiang) that suspects foulplay.  It is only when the Assassin Spearman (Feng Lu) himself shows up to give them the details that everything adds up.  Can the three take on Chow Feng and the best of Iron Flag Clan.

The Flag of Iron benefits from the adroit direction of Chang Cheh.  The film is light on action but heavy on character and plot.  Much of the film is taken from the stock playbook of martial arts films. The film takes its time to get to the confrontations/action but when it does the action is bloody good and just bloody.

Chang working with essentially the same actors and crew from his biggest hit The Five Venoms.  The film benefits from the youthful talent Chang used in his previous work brings added benefits beyond the action set pieces.  There’s a nervy energy that makes even the most clichéd of scenes, situations, and characters are vibrant and alive.

Make no mistake though.  When The Flag of Iron brings the action, it brings it.  It’s the kind of blood-splattering mania that martial arts fans of the 70s relish with glee. In that regard, though there may be less in the form of action, it’s more than made up for in the outright bloodletting.

The transfer is beautifully rendered on Blu-Ray by 88 Films. This is one of the Majestic Film transfers, so the original coloring and titles have been replaced by newer cleaner ones.  The handsome sharp image is as clean and flawless as the day it was produced. Many will critique the grading on the transfers but what we get in return and the fidelity of the image is just too good in a way that any of the Shaw Bros Studio films have looked.  88 Films continues its vital work of curating Asian Genre films both popular and obscure.

The audio commentary by Mike Leeder and Arne Venema begins with where this film lines up with the “Venom” movies and director Chang Cheh.  Some of the details include Quentin Tarantino is a huge fan of Chang Cheh, details of Chang Cheh career (including mentoring director John Woo), the finger game they’re playing at the beginning of the film, the change up from action-heavy “Venom” movie to a dialog-plot heavy which was a first, the Chinese nicknames and they don’t sometimes translates well in English, the Chinese Opera House and how they were the foundation for most if not all the Chinese Superstars and directors, gambling in the film and in Hong Kong/Chinese, a truly interesting side conversation about debt collectors and how this effected Leeder while his time in Hong Kong, the Shaw Brothers Studios system and how the Shaw’s and Mona Lee ran it, the differences between Shaw Brothers Studios versus Golden Harvest, the western films that Shaw Brothers Studios helped finance (beyond Bladerunner), the difficulty finding actors – even famous ones – in Hong Kong/China, the realities of the film preservation in Hong Kong/China and these films, the action of film that appears late but is very bloody, Asian Action cinema and inventiveness of the kills, the Venoms themselves and the infighting and history after this and much more.  Leeder and Venema have wonderful chemistry add that to their wealth of knowledge they both have on Shaw Brothers and Asian Cinema as a whole.  This is a perfect companion to their entertaining and informative track for Disciples of Shaolin.

The Flag of Iron’s Kung-Fu is really really good.  88 Films has packed this one with special features.  Highest Possible Recommendations.

88 Films’ Blu-Ray Edition of The Flag of Iron is out now.