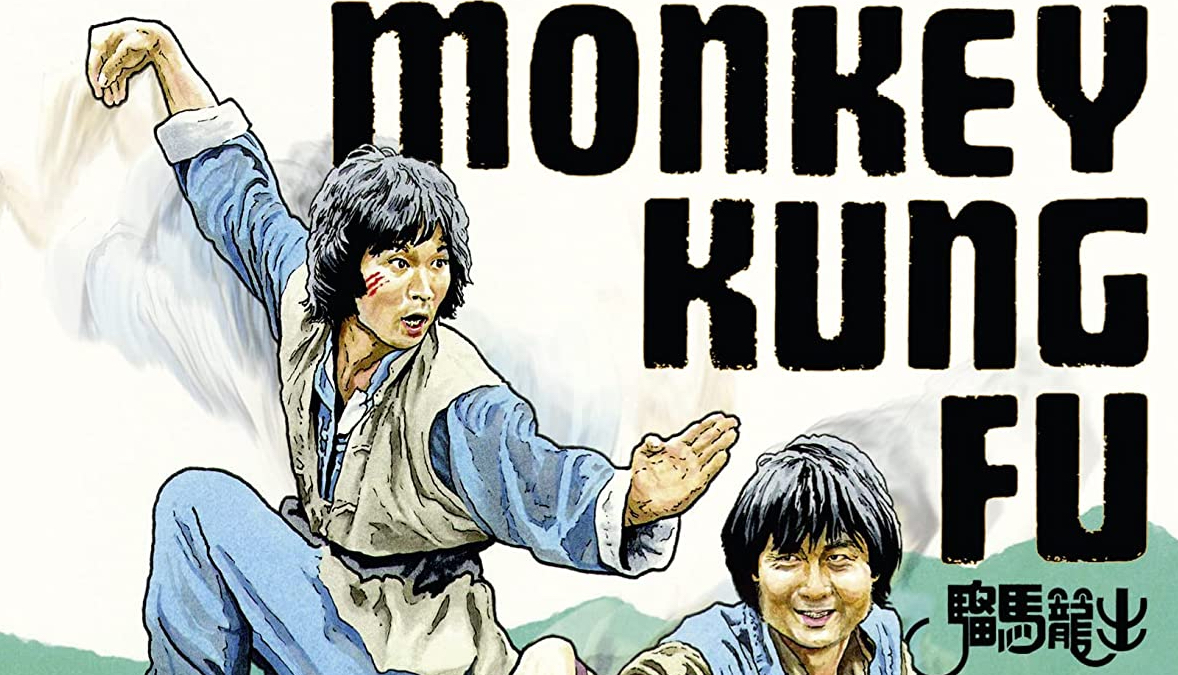 Another gem of a Shaw Brothers film from 88 Films, Monkey Kung Fu comes to Blu-Ray with a beautiful transfer and extras!

Monkey Kung Fu delights in both comedy and adventure.  The Mar Lo directed Shaw Brothers film is elevated by the chemistry of leads Siu-Tung Ching and Chiu-sing Hau.

A Prisoner (Siu-Tung Ching) is given one half of a medallion that shows the way to the legendary Kung-Fu Manual for Monkey Kung Fu.  His escape would be so easy if it wasn’t for the other criminal he’s chained to (Chiu-sing Hau).  Each fight one another and the other on their trail until they find the legendary manual.  Will they be able to train enough to take on the rival Martial Arts school after the manual to ensure its destruction and its own rise amongst the ranks of “very good Kung-fu”.

The film is a clever play on the subgenre of Martial Arts films that have many in search of a mystical “Kung-Fu Manual”.  It’s a plot that’s been used over and over but in Monkey Kung Fu it truly is secondary to the action, comedy, and general tomfoolery that Mar Lo has conceived of during the entire 93-minute run time.  In fact, the writer/director has concocted a film that yes, is light on story but rivals any of the early Jackie Chan action-comedies of the era.

There is a Midnight Run-style energy to the entire proceeding with Siu-Tung Ching and Chiu-sing Hau constantly at each other’s throats with Sui-Tung’s character wanting nothing more than to con the entire world and escape Chiu-sing’s characters more altruistic motives.  Much of the fun is derived from the trouble these two get themselves into and how they get out of it.

The transfer is beautifully rendered on Blu-Ray by 88 Films. This is one of the Majestic Film transfers, so the original coloring and titles have been replaced by newer cleaner ones.  The handsome sharp image is as clean and flawless as the day it was produced. Many will critique the grading on the transfers but what we get in return and the fidelity of the image is just too good in a way that any of the Shaw Bros Studio films have looked.  Monkey Kung Fu was shot primarily outside and looks wonderful.  88 Films continues its vital work of curating Asian Genre films both popular and obscure.

The all-new audio commentary by Kenneth Brorsson and Phil Gillon of the Podcast On Fire Network.  Kenneth and Phil begin rather cheekily by stating that anyone that does a Shaw Brothers commentary track should be obligated to hum the Shaw Brothers opening logo theme (they’re not wrong).  After getting bonafides out of the way the duo brings their track.  Some of the details include examination of the opening title sequence, the comedic tone of the film and how it differs from Jackie Chan-style action comedies, a detailed history and account of the personal life and career of director Mar Lo (otherwise known as John Law Ma), detailed history and account of the personal life and career of star and fight choreographer Ching Siu-Tung, some hilarious comments about Steven Seagal, the origins of the story of Monkey Kung Fu, the training scenes that are visually compelling, discussion of Mar Lo’s Bruce Lee biopic, the final third act set pieces, and much more.  Like other regular 88 Film Commentators Leeder and Venema, Brorsson and Gillon give us an entertaining and deeply researched commentary track.

Stunting Around – An Interview with Choreographer Tony Leung Siu-hung (14:46) – this archival interview with Tony Leung Siu-hung begins with how he learned from his “brother” Bruce Li the art of Martial Arts and Stunt Work.  Other details include working with director Mar Lo, the realities of day-to-day needs for an HK Action movie including modern movies, the hard work and understanding of what action choreography is, and examples of what he does with inexperienced actors and how much has not changed, and much more.

Monkey Kung Fu is a comedic action delight.  88 Films continues to show their complete understanding of how to release a Martial Arts Film.  HIGHEST POSSIBLE RECOMMENDATIONS!!!