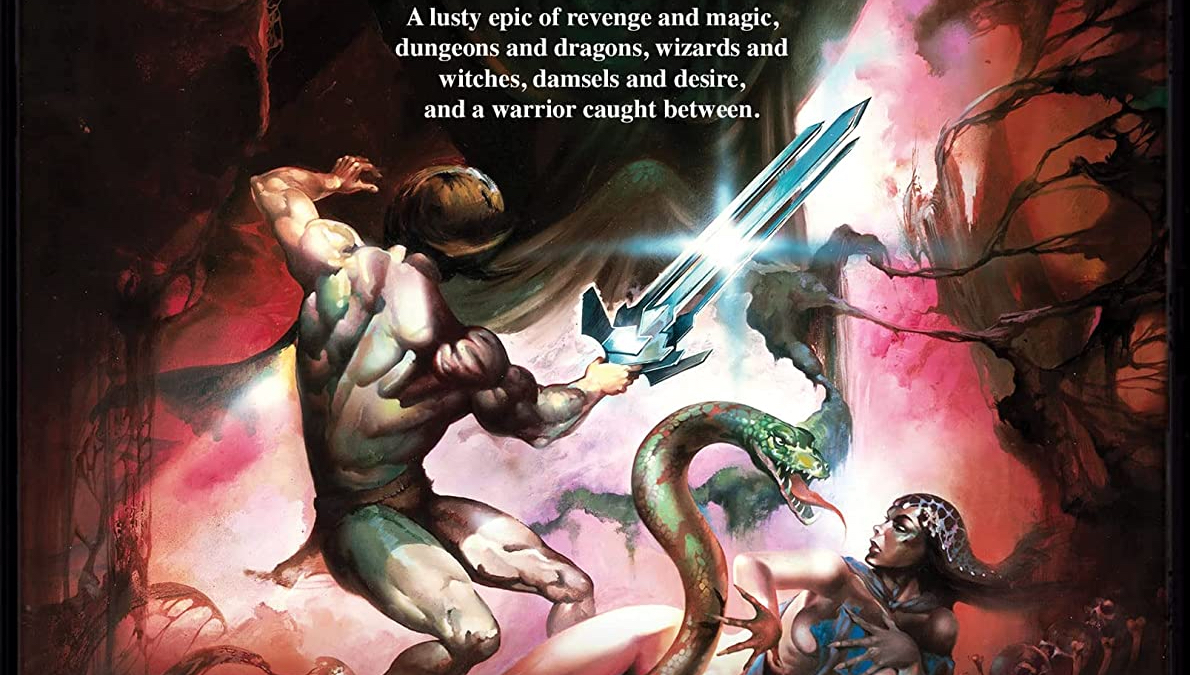 The Sword and the Sorcerer in 4K UHD glory!!! Scream Factory has graced us with a package fitting for a film with a 3-bladed Sword.

There was a time in the 1980s when you could throw a stick and find a newly minted Fantasy film with burly-chested heroes, buxom scantily clad – if clad at all – women, and monsters/villains of questionable quality.

Albert Pyun’s The Sword and the Sorcerer is to Fantasy films of the 1980s is what Saturday Night Fever is to Disco Movies.  That is to say that it occupies that ground so completely and utterly that the film is a relic or piece of futurism in the decades after or proceeding its 1982 release.  All the clichés and tropes that people think of when they think of Frazetta-inspired filmmaking are The Sword and the Sorcerer.

That doesn’t mean it’s a bad film.  Not in the least.  The Sword and the Sorcerer is guilt-free fun, albeit a bit goofy at times, but a rousing fun adventure (on a budget).  The tale of King Richard’s (Christopher Cary) assassination at the hands of Cromwell (Richard Lynch) and his Richard’s son Prince Mikah, later dubbed Prince Talon (Lee Horsley) eventual revenge.  Pyun’s use of historical figures’ names is cute but that’s where historical accuracy ends.  This is a film that mirrors Boorman’s Excalibur’s earthly witchcraft but upped a few notches for good measure.

The film feels more akin to Lester’s The Three Musketeers in the way that it is more swashbuckling adventure than fantasy.  There is more involved with the overthrowing of the tyrant Cromwell and ensuring the rescue of the damsel in distress than prophecies, spells, and monsters.  Though, when Pyun unleashes that part of the film, there is no going back, The Sword and the Sorcerer dives into that area of the fantasy pool with reckless abandon – within budgetary limits.

The all-new 4K Scan from The Original Negative along with Dolby Vision HDR encoding is a visual treat for fans.  The Sword and the Sorcerer looks like a beautifully preserved 35mm archival print.  It isn’t the sharpness or clarity that Scream Factory got right, rather the reproduction of the colors and film grain.  A new scan or restoration often means that people expect a perfectly clear image and without the dreaded DNR tools that just isn’t possible.  No one should want that.  I mention this because The Sword and the Sorcerer in its 4K UHD Dolby Vision encoded form… is ravishing in the way that a well preserved 35mm print is.  The way that the film grain is alive and almost liquid-y like the chemical process that produces a print is kept here in almost perfect form.  The colors are deeper and have a wider spectrum and range that puts any other iterations on home video to shame.  The work here is simply put marvelous.  The Sword and the Sorcerer in its 4K form is a perfect distillation of what makes this technology – at its best – so worthy of upgrading… giving us a digital form that accurately represents the 35mm experience.

The all-new Audio Commentary With Director Albert Pyun is hosted by John Charles Editor at Video Watch Dog Magazine.  Beginning with Pyun’s discussion about getting his feature debut off the ground the track is an enlightening and honest track by the writer/director.  Some of the details include a great story about getting Charlton Heston the script, shooting locations, the makeup FX work of the Chiodo Brothers, a huge issue with the contact lenses that cost them Richard Mull in an makeup-heavy role, a discussion of the death of stuntman Jack Tyree on set, the iconic three-bladed sword, the inspiration from the Baby Cart Films (aka Lone Wolf and Cub series), the in-fighting with his post-production and production crew that made for a difficult time with producer Brandon Chase, some of the other casting choices for the lead including a certain Baywatch star, his childhood in Hawaii and watching Toho movies, how that influenced him and his work, a discussion about Steven Seagal and a project he almost did with Pyun, discussion about working with Kathleen Beller, discussion about working with Lee Horsley, and much more.  Pyun is honest about the film’s shortcomings but also its charms giving us a truly great unfiltered commentary track.

Tales Of The Ancient Empire (33:06) – An all-new Interview with Director Albert Pyun begins with his origins making short films in Hawaii with his friends.  Pyun discusses trying to get his first film off the ground (which was this film), how the project came together, the production itself, his troubles with making the film, and more.  Again, like the commentary track, Pyun is brutally honest about his experiences which is refreshing.  There is a bit of cross-over with the commentary but not much in this great interview.

A Princess’ Tale (24:08) – An all-new Interview with Actress Kathleen Beller begins with how she got the role in the film.  Beller discusses the first day of the shoot and some panic that set in because of the budget, the work of Lee Horsley, a hilarious story about producing the scene with the snake and Horsley, working with Richard Lynch, the trouble with the production and her critique of Pyun, the nude scene in the film and how it played out over the production, and much more. Note the interview was conducted via Zoom and has the affectation and quality inherent within that format.

Mightier Than The Sword (19:51) – An all-new Interview with Co-Writer/Co-Producer John Stuckmeyer begins with how Stuckmeyer met Albert Pyun.  Stuckmeyer discusses Albert Pyun working with Kurosawa, how the project came together, working with Pyun, the level of detail that went into the pitch for The Sword and the Sorcerer (at the time called Talon), how Excalibur opened the door for the film, what caused the budget to rise, working with producer Brandon Chase, Chase trying to fire Pyun, how Pyun did not get fired, and much more.

Master Of The Blade (13:53) – An all-new Interview With Editor Marshall Harvey begins with his first editing job Disco Fever which hooked him up with producer Brandon Chase.  Mashall discusses cutting the trailer for Alligator led to his hiring on The Sword and The Sorcerer, his thoughts on Chase as a producer and distributor, Chase’s insistence on nudity and gore for an R-Rating, the post-production process, and much more.

The Specialist and The Effects (12:10) – An all-new Interview with Special Makeup Effects Artist Allan Apone begins with how his FX house got the job for “insert shot” Makeup FX.  Apone discusses how they approached the FX work they did, what the definition of an “insert shot FX” was and how it’s achieved, and much more.

Brothers In Arms (10:23) – An all-new Interview with Special Effects Artists the Chiodo Brothers – Charles, Edward, and Stephen.  The brothers begin with how they got the work on the film, what they did specifically – the tomb that comes alive, meeting and working Albert Pyun, some great jokes about not being paid, and much more. The Chiodo’s in true Chiodo fashion make sure to bring some items from the production.

Trailers From Hell (3:30) – Editor Marshall Harvey provides a mini-commentary track for the R-Rated trailer he cut The Sword and The Sorcerer (he also cut the film).

Scream Factory has given The Sword and The Sorcerer an impressive 4K UHD Collector’s Edition.  Highest Possible Recommendations!!!