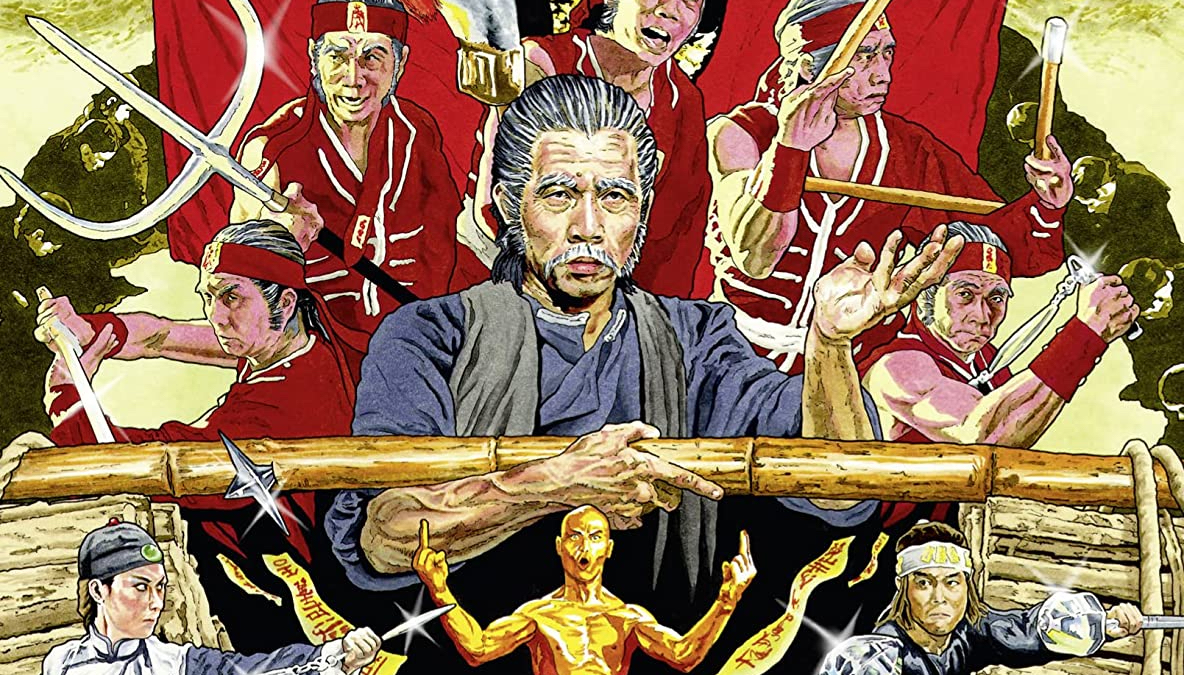 Wuxia is the order of the day in the Late Era Shaw Brothers Classic Legendary Weapons of China. 88 Films lovingly brings the film to Blu-Ray loaded with special features.

Director Lau Kar-Leung throws out his patented verisimilitude for a bit of magic and kick assery with Legendary Weapons of China. In delivering on the promise of the title no less than 18 unique and “legendary” weapons are used in the film.

Set during the Boxer Rebellion the Empress has ordered a search of all the prefectures for true supernatural martial artists aka wuxia to use against the western colonizers.  When they do find within the clan men who can repel swords (it’s called the Gold Bell) it sets off a series of infights that faces literal brother against brother, theology versus theology.

There is so much to love in this wild ride of the film.  This review could be just a list of random moments, action beats, character moments (both original language and English dub), and it wouldn’t be enough to convey how truly fun this film is.  Much of the delight is how much director Lau dives into the true lunacy of the proceedings.  There isn’t an action scene in the film that doesn’t make one either gasp or laugh or both.

Lau does double duty here as director and actor along with Lau Kar Wing, Hsiao Ho, Gordon Liu, and Alexander Fu Sheng.  Lau never a greedy actor or director gives each of them a wide enough berth and stage during their respective set pieces to show off their particular talents.  Fu Sheng and his conman routine in the early part of the film is truly hilarious as comedy and dazzlingly as the action that is reminiscent of the work of early Jackie Chan.

How it all comes together and plays out in the entertaining and lunatic final third is best to be experienced than discussed. Rest assured that if by its end Legendary Weapons of China hasn’t won you over … you may not be a martial arts fan.

The transfer is beautifully rendered on Blu-Ray by 88 Films. This is one of the Majestic Film transfers, so the original coloring and titles have been replaced by newer cleaner ones.  The image is clean and flawless other than the opening title sequence which does show a bit of age.  Other than that, the image is near perfect.  Many will critique the grading on the transfers but what we get in return and the fidelity of the image is just too good in a way that any of the Shaw Bros Studio films have looked.

The audio commentary is hosted by Asian cinema experts Mike Leeder and Arne Venema provide another one of their great deeply researched and highly entertaining tracks.  Some of the details include the stylized opening credit sequence, the mixture of genres in the film, Director Lau Kar-leung style versus the style Chang Cheh, star and the tragic loss of Alexander Fu Sheng, the Wu-Tang’s use of some of the English Dub dialog, Gordon Liu role in the film, personal accounts of Liu, the competition between the Venoms and Lar’s film crews and how they were very different, the broadness of the comedy in this film and other HK/Chinese films in general, the way the films were dubbed in Cantonese and Mandarin and how this could effect the release, a larger conversation about modern era language issues and how they still have doubles (including Jackie Chan and Sammo Hung), a great story about RZA, the Chinese film industry and its troubles in its infancy and the support systems that helped bring us the industry we know today, the work and history of Kara Wai aka Hui Ying Hung, the westerners living in HK and Cultural barriers, how this effects the way that HK/Chinese Stars perceives themselves because of the cultural divide, a great Gordon Liu personal aside, Liu being a heavy-metal guitarist (yes, I said that, heavy-metal guitarist), a hilarious Quentin Tarantino story about Kill Bill and Gordon Liu, and much more.  As with The Flag of Iron, the track is as fun and informative as the film itself.

The second audio commentary is hosted by Asian cinema experts Frank Djeng and Michael Worth. Djeng begins by introducing himself and filmmaker Worth and a discussion of the opening title sequence and the literal translation of the Title.  Some of the details include how the opening is constructed and how it sets up the entire film, the infamous alleyway that has been used in countless films, the translation of some of the “play on words” that would have been lost on English speaking audiences, their own personal accounts of seeing the film, the choreography in the film, the dubbing of this film and others, how this era laid the groundwork for which would eventually be the Triads, and much more.  Djeng and Worth serve up a lively scene-specific commentary that discusses the film from a filmmaker’s perspective.

The third and final audio commentary is hosted by Asian cinema expert Frank Djeng. This solo track is more informational akin to the one that Leeder and Venema.  Djeng begins with his qualifiers such as his work with Tartan Entertainment as producer, NY Asian Film Festival as the Co-Programmer, he even confirms that this first commentary is scene-specific.  This commentary is definitely a scholarly track with information such as production dates, box office results, cast, crew, and much more.  Some of the other details include a detailed account of how and why the opening sequence was created, a detailed account of the era that the film takes place in, the various actors that appear in the film, the behind-the-scenes crew that went onto greater roles in HK Film, a detailed account of Shaw Brothers Production, and much more.  Djeng’s deeply researched scholarly commentary is always fun and witty. The commentary is as vital as the other two and really doesn’t cover the same information that the other two do.

Eighteen Weapons – David West on Legendary Weapons of China (13:18) – The all-new interview is a discussion of this amazing film.  Some of the details include the context in which it was released, a personal account of seeing the film (including a great shot of the original UK VHS release he owns), the film’s critique of the martial arts film and its satire, discussion of what the Boxer Rebellion was, how the satire was aimed at many of the pillars of martial arts film, how the film is a dissection of the spiritual martial arts films and demystifying them, and more.  West’s interview is expertly intercut with clips, poster art, and production photos.

Gordon At Shaw – Interview with Actor Gordon Lui (15:09) – Recorded in 2004 in France, to discuss the rerelease of The Legendary Weapons of China. Some of the details include what the film was about, the moving of the film, the actors he worked with, and much more.  Liu is excited and very articulate by discussing the film. In Cantonese with English Subtitles.

Titus At Shaw – Interview with Producer Titus Ho (24:33) – This archival interview with Producer Ho begins with his beginnings at the studio and eventually writing Only One Way and Mobfix Patrol and getting into producing and production.  Some of the details include a technical breakdown of what an associate producer did at Shaw Brother Studios, hiring young talent (eg, what they call Little Brothers) that ended up being the likes of Andrew Lau (Infernal Affairs), John Woo, and others, how he divided his time before The Legendary Weapons of China, how he concentrated on the production as it was a huge production because it was the Chinese New Year release for the Shaw Brothers, the special effects work, working with director Lau Kar-leung, working with Alexander Fu Sheng, and much more.  In English.

The Legendary Weapons of China lives up to its legendary status.  88 Films have given us a package worthy of its reputation.  HIGHEST POSSIBLE RECOMMENDATIONS!!!