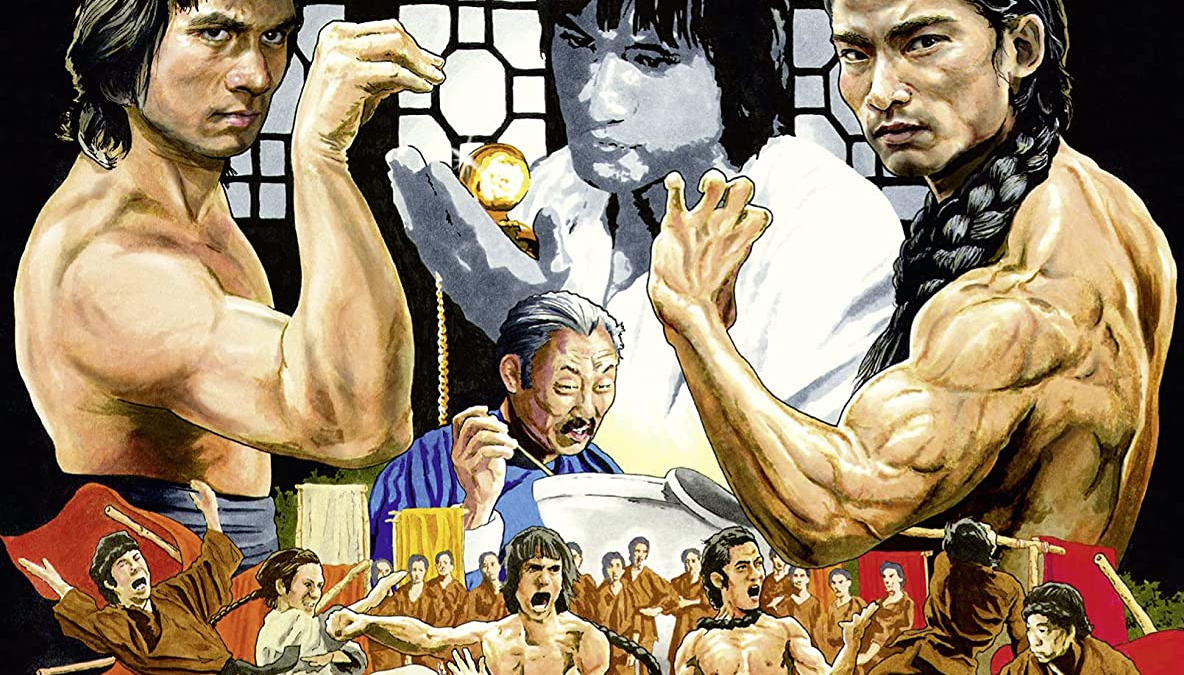 88 Films continues to kick ass with their Shaw Bros. releases with Disciples of Shaolin. Again armed with another revelatory transfer.

Martial Arts films of the 1970s were a staple diet of this film reviewer.  Local channels on Sunday afternoon would show whatever random film they had.  They would be cropped from their Widescreen framing, the dubs would be terrible, they would be edited down for time and content.  Basically, the worst possible viewing conditions.  I ate it up. I didn’t care about those things, all I cared about was absorbing everything in.

I mention this because Disciples of Shaolin felt familiar but it wasn’t until a fight in the last third of the film where one of our “heroes” is stabbed with a sword and continues to kick ass. At that moment a flush of memories came back and I had recalled this story of gangs, workers, working conditions, exploitation of the innocent.  Disciples of Shaolin does not play nice.  There’s a cold and calculating heart at the center of this film that cares nothing about your feelings about these characters and what happens to them.

Disciples of Shao Lin in part is your standard martial arts storyline.  Loner comes into town.  He meets his friend who helps him get hired.  There’s a gang of thugs that are wreaking havoc on the town and the workers.  Fist of fury play out against the backdrop of various stages set for maximum martial arts badassery.  This is where the standard-issue ends.  There is a cruelty and escalation that happens throughout where the heroes begin to not look like heroes and the villains become more villainous.

That detail and intelligence that’s brought to the story are equally brought to the fight scenes.  The choreography by Chia-Liang Liu is stylized but there’s a sense of wickedness to everyone’s movements and attacks.  Much of the fun comes from the fighters, both good and bad, fighting as dirty as possible to ensure winning.  Not as bloody as many others of the genre but the impact and grace of the choreography is elevated making Disciples of Shaolin something truly special.

This Restored HD Master in 2.35:1 Aspect Ratio is nothing short of a miracle.  The image’s sharpness, color, contrast, and black levels are perfectly rendered.  Much like The Chinese Boxer this film has been lovingly restored.  Having watched the film four times (once in Mandarin, once in the English Dub, and two more times with the commentary) and there is nary a scratch, fleck of dirt, any spot, sign of age, or wear and tear. One only needs to look at the two sepia-colored scenes to see just how gorgeous this transfer is.  Bravo 88 Films, it’s the second near-perfect transfer they’ve delivered in recent months.

The newly recorded commentary with Film journalist and Author Samm Deighan.  As she did with The Chinese Boxer, Deigham gives us a thoroughly researched account of the production of this film and its director Chang Cheh, and its star Alexander Fu Sheng.  Some of the details include how the film deviates from the standard films that Chang Cheh was known for with Shaw Bros, the tragic short career of Alexander Fu Sheng, the unique details brought to this standard storyline, the martial arts used in the film, the villains of the film, how this film diverts from Chang Cheh’s filmography, the influenced by Westerns and the Spaghetti Westerns of Leone, the influence of Akira Kurosawa, Chang Cheh’s influence on modern filmmakers and genre filmmaking in general, the lack of serious critique from Western Critics and Critics regarding not only Cheh but Eastern genre filmmaking in general, the work and life of legendary fight chorographer Chia-Liang Liu, the passing of Alexander Fu Sheng, the historical context and background that the film takes place in, a history and account of the rise of the Shaw Bros. Studios, the rise of Wuxia genre at the studio, how Shaw Bros. studios paralleled Hamer Horror, the wide and far of influence of Shaw Bros. studio films, the importance of how innovative the work at the studio was, the lack of female presence in the film but the interesting nature of how they’re portrayed, the huge supporting cast of the film, and much more.  As with all Deighan’s commentary is well-researched, filled with purposeful quotes, and most of all informative and entertaining for anyone that truly loves Martial Arts films.

The second newly recorded commentary by Asian Cinema Experts Mike Leeder and Arne Venema.  The commentary begins with a discussion of the multiple alternate titles of the film, which was standard of the era.  Some of the details they discuss the short career and life Alexander Fu Sheng and his lack of status in Hong Kong and China and the reasons why, the Johnny To remake (as The Barefoot Kid), a great discussion of Laserdiscs and home video releases, some historical context on the textile industry in China, the imagery and brotherhood in Chang Cheh films and its purpose, the life and times of Alexander Fu Sheng, a great discussion of the sandals featured prominently in the film, a discussion of the exploitation god Stephen Yip, a discussion of Taiwanese Category 3 films (aka Sex films), the severeness of the Shaw Bros and how they were similar to the studio system back in the 1930s, how this was their downfall, the direction of Chang Cheh and the genius touches he made, Chang Cheh’s influence on modern western filmmakers like Quentin Tarantino, Robert Rodriguez, the career of Chia-Liang Liu beyond stunt choreography, the significance of Alexander Fu Sheng’s character wearing white in the finale, and more.  Leeder and Venema’s commentary is a fun, funny, and informative track with some great deviations and sidetracks.

Jamie Luk at Shaw Brothers (25:40) – is an archival interview with Actor / Director Jamie Luk by Frédéric Ambroisine.  Some of the details include how he began to work at Shaw Bros, the process of auditioning, contracts at the time in the 1970s in Hong Kong, the realities of working as an actor in HK at the time, working with stars of the film Chi Kuan-Chun and Alexander Fu Sheng, the production of Disciples of Shao Lin, working with Chang Cheh and much more.  In Mandarin & English with English Subtitles.

Original Trailer (2:52) – If one wants to see an example of the amazing restoration done just look at the image on this trailer for comparison.

Disciples of Shaolin is a truly great film being given a great edition by 88 Films.  Highest Possible Recommendations.