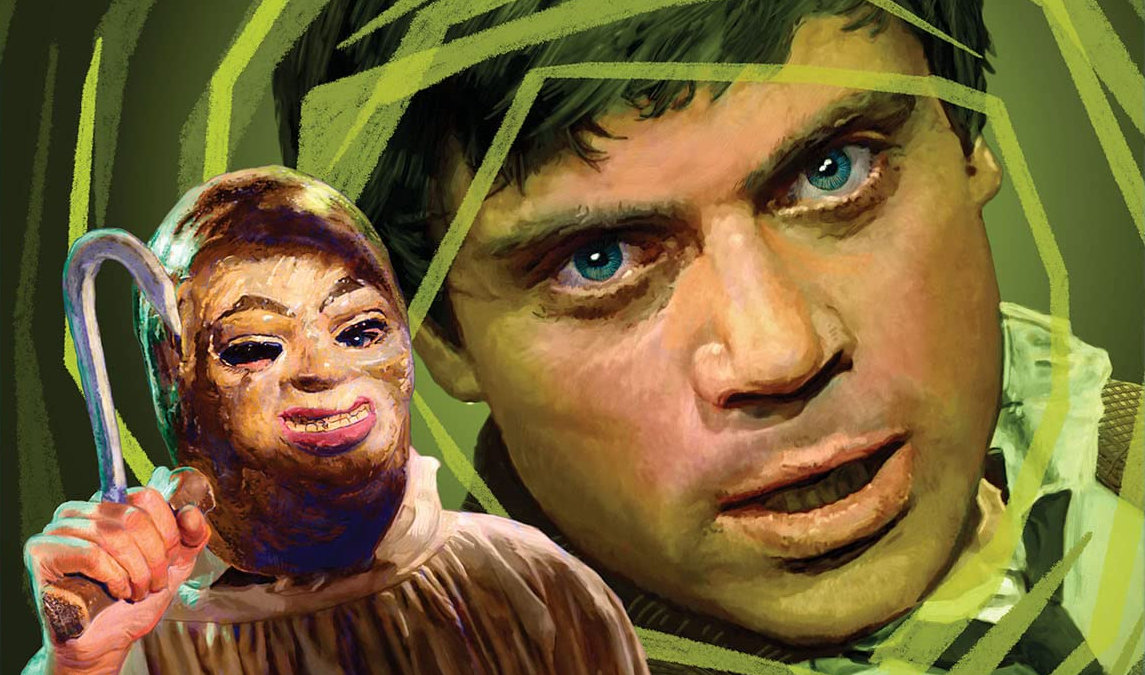 Hammer mines the same ground as Hitchcock and Clouzot with Paranoiac.  The results are a truly wicked little thriller with a keen visual eye from cinematographer turned director Freddie Francis.

The Ashby Family is the kind of Brits that have the kind of Wealthy that spans generations.  Though generations are being cut short by the fates.  Though the Ashby’s are about to get the rudest of awakenings as the long-dead eldest son Tony (Alexander Davion)is back from the grave after a suicide.  Only his sister Eleanor (Janette Scott) believes he is the real Tony as the timing is too convenient.  As the truth about Tony’s apparent suicide comes to light the more in danger are both Tony and his sister are under the suspicious and possibly murderous eyes of Simon (Oliver Reed) their younger brother.

Much of the film’s success comes from the sharp lean script by Jimmy Sangster that keeps the plot barreling through to its abrupt but sharp ending.  Also, Francis’ beautiful direction keeps the camera moving with purpose and visual acuteness. The beautiful black and white widescreen visuals aid in this handsomely told thriller.

The biggest asset is what turns out to be Oliver Reed’s drunken violent dilettante Simon.  Though a supporting character, Reed literally sucks the air out of the room.  Simon, be it plotting nefarious schemes, manipulating beautiful young nurses, or abusing the staff of the manor, is pure evil.  It is Reed’s Wildman bravado that takes Simon’s antics and really puts dread into them in the way that Reed could put physical menace on display.

Paranoiac delivers a twisty and twisted narrative that only Hammer can.  With style, grace, and that wit that even though you’re watching the most murderous salacious plots you can’t help but smile and be fully charmed.

The new 2K scan from the interpositive provided to Scream Factory by Hammer is beautiful.  The widescreen black and white cinematography is luminously reproduced here.  The image is sharp, and the contrast levels are almost perfect.  Only a few minor scratches and specks of dirt can be seen in an otherwise perfect transfer.

The all-new audio commentary with film historian Bruce Hallenbeck.  Hallenbeck begins with a small historical overview of the Hammer Thrillers which leads into his discussion of what he calls “the greatest of the Hammer Thrillers” Paranoiac!  Some of the details from the commentary include the influence of Dialobique and the work of Hitchcock, the work of Director Freddy Francis, Francis’s work as a cinematographer, the work and personal history of Oliver Reed,  the work and history of Janette Scott, the work of Liliane Brousse, the film was a double bill with Kiss of the Vampire, the cinematography of Arthur Grant, Francis’s dissection of what it was like to work during the heyday of Hammer Films, how Hammer got financing for the films they made, the actual production of the film, a very specific and legendary story about Oliver Reed’s notorious drinking, the success of the film, some of the design/makeup work and Francis’s thoughts on the matter, and much more.  Hallenbeck’s well-researched commentary has some great quotes pulled from various sources including Francis’s own biography.

Drink to Deception (14:48) – an all-new interview with author/film historian Kim Newman that looks at the production of this film.  Newman as always gives us some great details and sets the stage of where Hammer was when they adapted this for the big screen.  Some of the details include how the source novel from Josephine Tey morphed into something different as Hammer got their first huge hit with a Horror film, a version that would have had Joseph Lousey as the director, the work of Oliver Reed in the film, the development of the script, the production and release and more.

A Toast to Terror (25:23)– an all-new interview with author/film historian Jonathan Rigby.  Like Newman’s interview, Rigby goes into the making of the film, personal recollections about the film, and other insights.  Some of the details include a look at screenwriter Jimmy Sangster’s work here and in the Hammer Production at large, Sangster’s writing style and how it informed the film, and much more.

The Making of Hammer’s PARANOIAC (27:57) – the archival making-of hosted by author Wayne Kinsey.  Kinsey guides us through how Hammer came about to produce the film with Universal Pictures.  This making-of is slickly produced with some truly great behind-the-scenes photos, production art, clips from other films, and much more.  With comments by screenwriter Jimmy Sangster, AD Hugh Harlow, script supervisor Pauline Harlow, and others.

Still Gallery (5:56) – the 44 Black and White production photos and poster art are played automatically but can be paused for further review.  Note there is no music that accompanies the gallery.