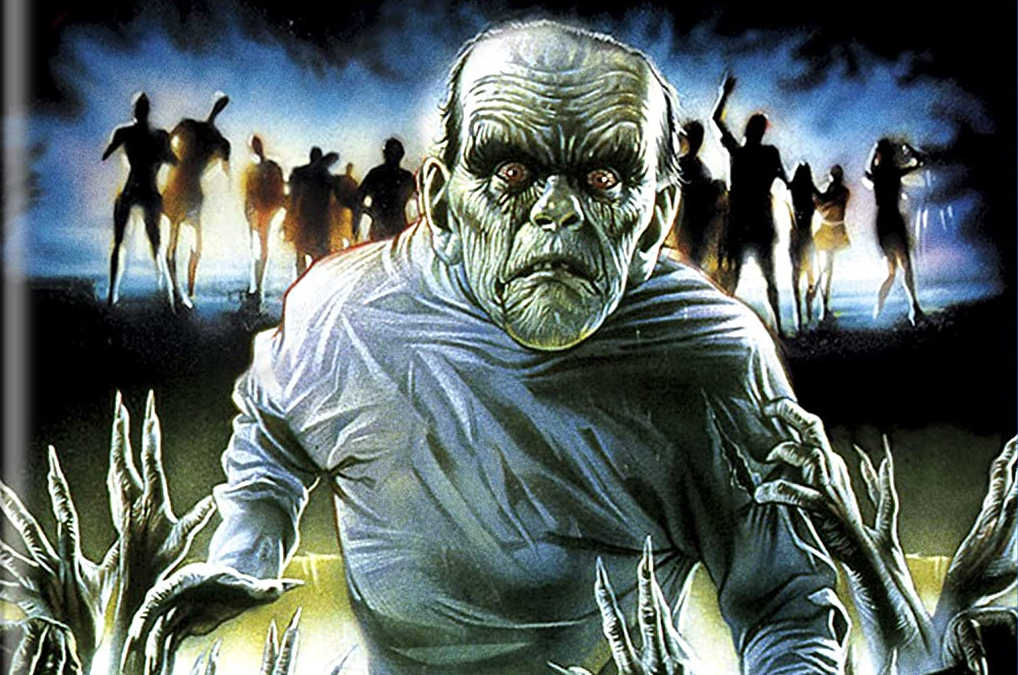 Brett Leonard’s zombies in a mental asylum horror film The Dead Pit makes its return to Blu-Ray (after being out of print for some time) thanks to Code Red and Kino Lorber.

The Dead Pit is very of its era in its tone, style, and most of all storytelling.  This One Who Flew Over the Cuckoo’s Nest by way of Night of the Living Dead mash-up is fun but with a huge dollop of suspension of disbelief.

Dr. Ramzi is the type of mental health clinician that loves to torture patients.  But the reasons why he is torturing said patients is a mystery we do not really get a chance to investigate.  Before any more of the “experiments” can occur fellow doctor Jerald Swan (Jeremy Slate) has dispatched him.  Cut to years later and a mysterious patient Jane Doe (Cheryl Lawson) is admitted to the same hospital.  After an earthquake, the patients begin to unhinge and revert to almost homicidal actions.  No one included Dr. Swan seems to care and chalk it up to a “case of the crazies”.  It’s up to Jane Doe and fellow patient Christian (Stephen Foster Gregory) to get to the bottom of these stranger and stranger occurrences and for them to end it.

Leonard’s film is as linear as one can get within the confines of this type of story.  What the film and the director excel at are the small hallucinatory visions and nightmares that happen through the course of the film.  Though even these set pieces either taking place in reality or in fantasy have a twinge of Giallo to them that elevates this from just another indie horror film to something with a bit of style and understanding.

The biggest issue is the film’s understanding of mental health has all the cliches and trappings of the 1970s and 1980s.  This is a film that has patients being firehosed and lobotomized.  Where the nicest of nurses and orderlies are of the Nurse Ratchet cruelty as the antidote persuasion.  Additionally, the leeriness of having your main hero in her white bikini briefs and halter top for 75% of the film didn’t fly even then.

The Dead Pit definitely shows the stylistic promise of the director who would go on and begin the filmic CyberPunk subgenre with The Lawnmower Man and Virtuosity.

The 2K Scan from the Original Camera Negative does wonders for this rarely seen cult horror film.  The film shot primarily at night is beautifully transferred to Blu-Ray.  The 35mm image is gorgeous and without fault.

The archival audio commentary by Director Brett Leonard, Writer Gimel Everette, and Star Jeremy Slate is a solid conversation about the making of the film.  Some of the details include Leonard making a cameo, working in a working Hospital during the production, the style as a new film director Leonard used, the reasons why Cheryl Lawson was cast, Leonard and Everette’s love of the work George A Romero, One Flew Over the Cuckoo’s Nest influence on the film, Slate’s work before the film, the work of cinematographer Marty Collins, the directing and acting in lower budget films under time constraints, editing on film rather than editing on computer for this film, how they managed to get access to a working hospital and some of the fall out of it, the work of special FX supervisor Ed Martinez, Third Man being an influence on the film, and much more.  Leonard, Everette, and Slate have more of a conversation about the time with some great informative anecdotes about the production.

Brett Leonard (21:07) – this archival interview with the co-writer/director discusses how the film came together (out of the ashes of a film project they were trying to set up), a project that he shot action for called Deadlock, how The Dead Pit came about with a producer that said Zombie Movies made more money, how they were able to shoot on 35mm, the production of the film and much more.

Gimel Everett (10:55) – this archival interview with the co-writer/producer discusses how she and Brett Leonard’s work on Deadlock created the opportunity to do The Dead Pit, and how quickly everything came together with script, budget, and production in and around San Jose at the time and much more.

Cheryl Lawson (12:32) – this archival interview with the actor discusses how she got the part, not reading the entire script or knowing it was a zombie/horror film, filming the hydro-therapy scene, nudity, running around in her underwear most of the film, and more.

Jeremy Slate (13:55) – this archival interview with the actor discusses how he got a part in Deadlock while he was creating a Soap Opera, how the work in Deadlock turned into The Dead Pit, working 60-hours straight on the film (specifically during the acupuncture scene), and much more.

The Dead Pit is a zombie film ripely from the cult-y 1980s aisle of the video store.

Code Red’s Blu-Ray edition of The Dead Pit is out now.