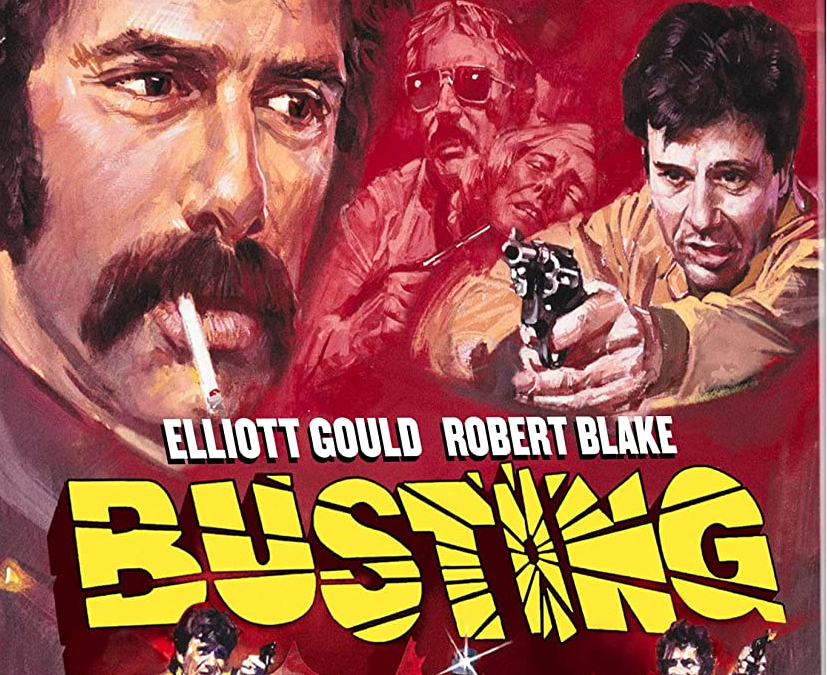 Elliot Gould was never better than he was in the 1970s.  Busting the police procedural from director Peter Hyams is a prime example.  Back on Blu-Ray from Kino Lorber.

Busting is a spiritual cousin with Freebie and The Bean.  The same sort of wild unhinged behavior is on display from the cops trying to bring down a local crime boss.  Though writer/director Peter Hyams film is more a serious critique on policing and corruption with less of the devil-may-care attitude of Richard Rush buddy cop comedy.

Hyams film is more French Connection than it is a comedic buddy action film.  There’s a serious undertone that lines everything.  Even when these cops are joking it’s the most inappropriate gallows’ humor.  Hyams never condones these men just shows them as they work and their methodology.  Whether it’s being homophobic, killing, or arson Keeley and Farrell do not see anything wrong with the tools they use to try to get Rizzo because Rizzo isn’t playing by their rules.  Part of the sobering aspect of Busting is that Hyams shows that the line they cross even if Keeley and Farrell don’t. Even more sobering is that Hyams’ film understands they’re just as guilty as Rizzo, in different ways.

By its end, Busting has given an audience not necessarily what it wanted but what it needed.  The verisimilitude that’s often not present in police procedural action films.  That wanton urge to allow cops to become fascists is completely quelled within one freeze-frame shot.  That along with the proceeding ending titles is as much an indictment of police as it is corruption as a whole.

The transfer provided to Kino Lorber appears to be the same one that the previous edition of Busting was sourced from.  The handsome sharp image is a solid representation of the 35mm image.  The film grain, hazy sunshine-lit scenes along with low-lit nights is perfectly rendered here.

The Audio Commentary by Director Peter Hyams begins with a discussion that everything that occurred in the film is based on facts and discussions with vice cops and sex workers and how that was the basis for this film.  Some of the details include his thoughts on watching films after they’re released, the casting of Elliot Gould, the casting of Robert Blake, the cameras and camera work of the film (Hyams doubles as his own cinematographer), Hyams dissection about the Gay Bar scene and how he checked with the Gay Alliance and worked with them for an accurate portrayal of Police treatment of the LBGTQ+ community, the backlash from the Gay Alliance after the release, the courtroom scene and his intent with the scene which was not to be comedic but serious, working with Robert Blake before becoming famous for Beretta, creating the mid-film night chase scene, working with Allen Garfield, the specifics of shooting gunshots and strobes with cameras (both 35mm and digital), a funny incident involving radio mics Gould and Blake improvising some filthy language and a nearby Musical Stage production, the story of why people do not use the “Happy Birthday” song, and much more.  Hyams gives us a detailed commentary track (with a few bouts of silences) with some great anecdotes about the production, release, and his directorial style, challenges, and methods.

The select scene Audio Commentary with Star Elliott Gould and Film Critic Kim Morgan.  Morgan acts as host prompting Gould to discuss the film in a 46-minute commentary track.  Some of the details include Gould being on the Dick Cavett show lead to him being cast, casting Robert Blake and how it was another actor at the time, Tarantino’s love of the film, the gay bar scene and Gould’s recollections of it, how Gould approached the character, the various suits and clothing that Gould wears in the film, working with Michael Lerner in an early work, a discussion of the mid-film chase and how it was accomplished, the original casting of the Garfield character (it was Gary Marshall), Gould discussing a screening of Bullitt with his first wife “Barbara” (if you know Gould then you who Barbara is), the location used for the strip club is actually the Viper Room, the opening of The Long Goodbye and how that prompted a huge argument between the actor and Hyams, the infamous ending, and much more.  The conversation is truly great with Morgan and Gould in conversation about the production.

Busting is a great police procedural.  KL Studio Classics has done right by it with its newest pressing. Highest Possible Recommendations!!!