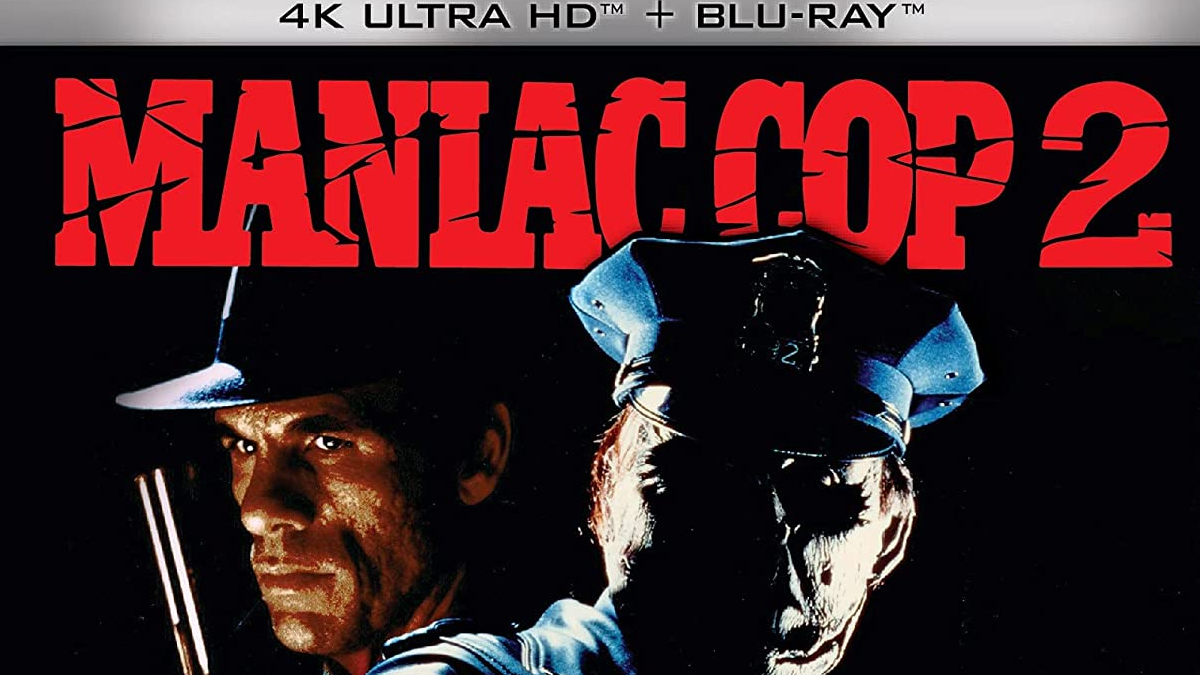 The mad geniuses at Blue Underground have done it again.  Maniac Cop 2’s upgrade to Dolby Vision and Dolby Atmos Enconded 4K UHD Disc is nothing short of amazing.

The pairing of director William Lustig and writer Larry Cohen is a match made in B-Movie Heaven.  It begat the original Maniac Cop which is a grindhouse cult classic of the highest order.  Maniac Cop 2 does everything that the first does but does it a little bit crazier and bigger than the first.  The results are probably the best film in the series.

Some of the best sequels take the framework created by the first film and break it enough and rebuild it in a way that gives us a greater understanding of the mythos and world we’re in.  Maniac Cop 2 does that in a way that’s more adroit than most A-List Franchise Blockbusters have the wits to do.  Though this is almost to be expected when Larry Cohen is your screenwriter.  Cohen’s script is a well-oiled grindhouse machine designed at every turn to entertain and delight its intended audience.

Add Lustig’s stylish direction to that script and you have a film that is the very best unsung, underrated, almost forgotten action supernatural horror film of the 80s.  Part of the reason why the film works so well is because of Lustig’s passion and understanding of the material.  This isn’t a fly-by-night crass cash-in.  Lustig treats the material with the respect that Cohen treats his scripts with.  This isn’t just in the crackerjack Hong Kong-influenced action set pieces (which they’re plenty of) but the moments of interactions with characters.

Maniac Cop 2 by its end with its delirious revenge in prison third act is the right amount of over-the-top that one can’t imagine a B-Movie fan not going ravenous over this perfect slice of popcorn + razor blades cinema.

Now for the real reason, you’re here.  The transfer is in a word … stunning.  The Dolby Vision encoded HDR UHD disc is a showstopper.  Much like the work they have done in the past with titles like Dead and Buried, The Final Countdown, and Vigilante Blue Underground brings their delicate touch to the image.

I’ve tried to explain to people that 4K UHD discs (don’t get me started on the NOT-4K Streaming claiming to be 4K) are not about sharpness but about the luminousness of the image.  The one thing that no video format, until now, has ever been able to give us the range in density (the combination of contrast, color, grain structure, and black levels), and luster of 35mm or god forbid 70mm (actually 65mm, again don’t get me started).

That’s what UHD discs give us now.  For the first time on home video, things appear to mimic film in a way that nothing else can.  Blue Underground and the transfers gods they employee understand this better than 90% of the boutique label market.  This translates to an image that looked better than the original 35mm theatrical prints.  A transfer whose trashy neon-lit NYC looks as crisp as the cold winter nights it was shot on.  The clarity is not what pops here but the level of detail in the blacks of the image.  One only has to look at the Cordell appears from the target range shot to be impressed with the subtlety of the image.  It’s this kind of work that is jaw-droppingly good.  The work would have been impressive on a big-budget title, on Maniac Cop 2 is revelatory even compared to the initial Blu-Ray release, which in it of itself was a revelation at the time.

NOTE: This is a UHD + Blu-Ray combo.  Only the audio commentary, isolated music track, and trailer appear on the UHD. The rest of the special features + the ones on the UHD are on the Blu-Ray.

The archival commentary by director Lustig and Winding Refn is an all-timer.  The relaxed commentary begins with a discussion of the recap and why it was necessary including some really great fun facts and only goes from there.  Some of the details include that the original was designed to be a franchise, the wild car stunt that ends the prologue, the contract and budget discussion of the franchise and its success, the premiere at Cannes of the original, how the rise of the VHS/Home video Market affected the making of the trilogy, the reasons for filming LA for New York, how Lustig and Larry Cohen collaboration and their friendship, how Laserdiscs connected Lustig and Michael Lerner, the crazy story of how Robert Davi was cast, a discussion of the core crew and how Lustig began to work with each, how Lustig likes to approach shooting and blocking a film especially in NYC, his work with Claudia Christensen, wild anecdotes to filming the infamous Taxi-Cuffed to the Car chase scene in New Jersey and Los Angeles, the editing and post-production process to meet the Cannes premiere, the casting of Leo Rossi as the serial killer, the development of Rossi’s character, the mixture of Cohen and Lustig regulars and how they were cast, a hilarious exchange for a stunt between Lustig and Stunts Coordinator/2nd Unit Director Spiro Razatos concerning a certain Bette Middler film, the way that the distribution worked out and New Line loss out and why, the discussion of Maniac Cop 2 as an “honest B-Movie”, the filming of the bus chase and eventually the prison break-in and the complexity and stunt work, and much more.  It is very obvious that Lustig and Winding Refn are good friends and provide an informative commentary track.

Isolated Music Track (87:28) – the isolated music track runs the entirety of the film.  Rather than just be a score compilation that plays the first 45-minutes this is truly an isolated and complete score.

Back On The Beat – The Making Of MANIAC COP 2 (46:52) – an archival making of with Lustig and Cohen as our guides on the making of the sequel.  Some of the details include how the original came together out of Lustig not working for 4 years and Cohen being fired, working towards a franchise, the reason why the leads had changed from the sequel, how Davi was cast from Davi’s perspective (with Davi’s great Lustig impersonation), from Christensen’s perspective what went down during the production, how Lerner was cast after Richard Crena dropped out, how Leo Rossi was cast and a truly hilarious story about his “in-depth research”, the casting Robert Z’dar, how the make-up appliances were developed/designed and applied, the troubles for Z’dar in the trouble with the make-up appliances, Spiro Razatos passing on Stunt Doubling DeNiro in Midnight Run to work on this, Spiro and Lustig’s watching Asian action cinema and how it influenced the action scenes of the film, the blood and gore of the film, Rossi’s account of the burn that he did a section of, the ending of the film, the post-production and release, and its restoration on Blu-ray, and much more.  Comments by producer/director Lustig, producer/writer Cohen, actors Claudia Christensen, Robert Davi, Michael Lerner, Leo Rossi, and Robert Z’dar, Special Make-up Effect Creator Dean Gates, Stunt Coordinator/2nd Unit Director Spiro Razatos and others.

Cinefamily Q&A with Director William Lustig (28:36) – filmed in 09/14/2021 at the Cinefamily theater post-screening of the restoration of Maniac Cop 2.  Lustig goes over some of the same anecdotes from the commentary and making-of but adds some additional details.  There are some great asides including Lustig’s “uncle” is the real Jake LaMotta, of course, a Joe Spinell story, Sam Raimi’s involvement with the beginning of filming Maniac Cop, and much more.

Deleted Scene (1:30) – the title of the scene Evening News with Sam Raimi says it all.  Thank you Lustig for finding this pearl.