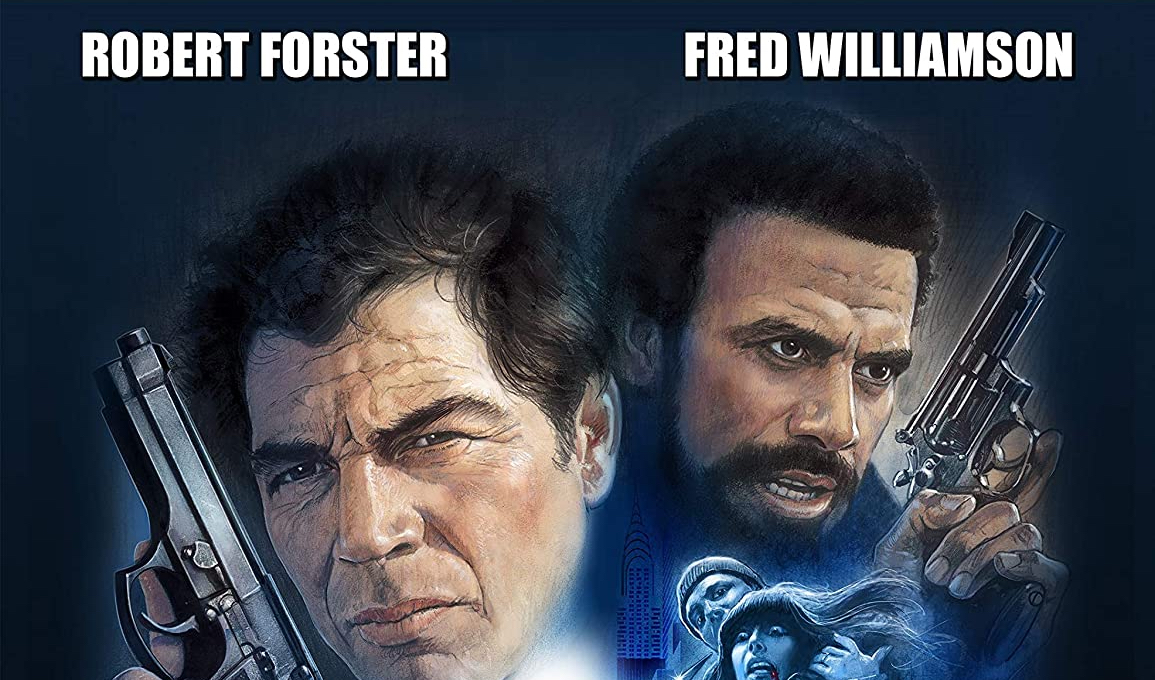 William Lustig does not make films for everyone.  Thank god.  If you’re attuned to his specific wavelength Vigilante like Maniac and Maniac Cop (1 – 3) is a slice of badassery that keeps you coming back for more.

New York City.  The 1980s.  The dumpster fire of crime.  Assaults, Robbery, Rape all go unsolved by a corrupt or apathetic police force.  Nick (Fred “The Hammer” Williamson) and a group of fed-up citizens have decided to do something about it. Not Eddie (Robert Forrester) though, Eddie hasn’t been touched by the violence … yet.  A truly horrifying event leaves Eddie and his family shattered.  The justice system turns on Eddie and instead of the criminals.  With the sickening violence having seeped into his life, Eddie like Nick is out for revenge.

One is best to go in without much knowledge but know that the script by Richard Verete is designed to shock and provoke but in the most comic book of ways.  If you are easily offended by violence I would stay away as they cross one boundary that is almost never crossed.  The film, if on your wavelength is a surefire hit.

Lustig’s film delights and relishes in pushing people’s buttons.  At every turn, it manages to agitate and confront you with ugliness.  You can almost hear the laughter behind the camera as Lustig pulls set piece after set piece off.  There isn’t the sort of sexual abuse that Michael Winner loved to devolve into.  Rather Lustig is much more adept and skilled than Winner ever was.  The director relishes igniting people with overheated turns of events.  Like a PT Barnum of the Exploitation set, Lustig’s films go the places you do not expect.

Vigilante may not be for everyone but for those that it is, it will be an instant classic sure to be in heavy rotation.

This new 4K Restoration from the original 35mm camera negative is nothing short of spectacular.  Like their Daughters of Darkness 4K UHD a few months ago this disc is a revelation.  Blue Underground working with Lustig has created what is the definitive edition of the film.  The 4K Dolby Vision encoded transfer retains the grain structure and beautiful sometimes hallucinatory color spectrum.  The transfer looks like a newly struct 35mm archival print.  The way that the film has that photochemical feel but still retains its sharpness is a marvel that will have fans of this film who first viewed it on muddy VHS copies in disbelief.

The archival recorded commentary by Lustig and producer Andrew Garroni is a great informative track.  Recorded in 2010 this commentary is a nuts and bolts track that Lusting and Garroni discuss the ins and outs of indie filmmaking.  Lustig is not shy about the film and the low budget nature of the film.  Details include Forrester not being the first choice, how Tony Missoni (of Bird with the Crystal Plumage fame) came on board and was dismissed, beginning a film without a full budget, dealing with the unions, detailed discussion of deferments and how troublesome it is, the great advice about what to do when you owe someone money, a story about the Carnegie Deli sent a loan shark to collect a debt, their relationship with Joe Spinell, how they were able to film at Riker’s Island, the appearance of Willie Colón, and so much more.  Anyone that wants to make low budget genre films will do well by listening to this amazingly honest track by Lustig and Garroni.

The next archival commentary is by Lustig joined by Fred Williamson, Frank Pesce, and Robert Forrester.  This commentary is a hilarious entertaining with everyone in a fine mood watching everything with much enthusiasm.  There’s a lot of ballbusting going throughout the commentary.  Things like discussing Forrester’s starrer of Alligator, Williamson loss of his Superbowl Ring, Jake LaMotta’s relationship with Lustig, the directing careers of both Williamson and Forrester, the late-great Joe Spinell, some truly crazy stories about filming Riker’s Island, the release around the world, and so much more. I cannot stress enough how much fun this track is.

The third and final track on the disc is from Film Critic Troy Howarth and Mondo Digital’s Nathaniel Thompson.  Recorded in 2020 the track is more of a critical eye of the film.  Howarth and Thompson have a great back and forth conversation about Lustig’s career, his home video company, and his ties to Italian Genre cinema.  Details discussed is the inherent racism in the revenge genre made famous by Death Wish, William Fredkin’s influence on the genre, its ties to Cruising, the 1980s New York, the infamy of Death Wish II, Joe Spinell as an actor (including a great joke about Marriage Story that I will not ruin), Fred Williamson’s career, Willie Strode’s career, Robert Forrester’s career, the MPAA and ratings and the politics of, and more.  They discuss the genre and Lustig’s filmmaking as a whole rather than the production of the film as they admit themselves that there are two other tracks on the disc where the production is discussed. This track is a great counterpoint to Lustig’s two tracks.

Blue Collar Death Wish (24:42) – an all-new making-of featuring interviews with Lusting, Forrester, Actor Frank Pesce, Writer Richard Vetere, actor Rutanya Alda, Associate Producer/First A.D./Actor Randy Jurgensen, and others.  This informative making-of does a great job of not going over too much of the same territory that the three commentaries do.  The best interactions are between Jurgensen and Pesce about how they “met” before both got into film. They do a great job of the context that bore the script, finding the budget, and eventually production and release of Vigilante.

Urban Western with Jay Chattawy (25:08) – an all-new interview with the Composer Chattawy.  Starting with how Chattawy was inspired by seeing Henry Mancini live.  The Composer discussed how he was drafted and was conscripted to the Naval Band that eventually led to him being the composer for Naval Films.  The details discussed are things like how Chattawy was hired for Maniac which lead to Vigilante, how he worked back during that time as compared to now, how he worked with Lustig, and more.  Far too often Composers do not get the credit they deserve.  It’s nice that Blue Underground and other labels as well have been giving longer-form interviews to Composers, especially these genre Composers.

Trailers – U.S. Trailer (1:40), International Trailer (1:52), British Trailer #1 (1:54), British Trailer #2 (2:13), German Trailer (1:49), Italian Trailer (3:22), and French Trailer (1:48).  Note that the U.S. Trailer has been gorgeously restored (also of note how the Voice Over calls people “animals”… ouch). The British trailers are so caustic they feel like a satire.  The German trailer also very serious but done with dubs that need to be heard, also the film called Street Fighters in German.  Of course, the Italian trailer is the best going for the most ultra-violent version of the films with the voice-over that even if you don’t know Italian you definitely know what he’s saying… also The Hammer gets top billing (because he was a superstar in Italy).  The French trailer begins with a title card “Criminals Attentione!” with the very serious narrator going hard on the selling of the crime and lack of justice.  Note there is a Play All option.

Promotional Reel (3:14) – discussed in all three commentaries is this Promo Reel that was shot for an international film seller’s market.  Before the Promo begins a title crawl explains the context and camera equipment and stock used to create this piece.  It is basically the opening scene with Williamson.  Note this is present SD and 1.33 (which is great for context for people to see just how much is cropped from the beautiful 2.39 image on the feature film).

Poster & Still Gallery #2 (3:51) – this gallery of approximately 60 production still and behind the scenes photos runs automatically with the score by Jay Chattawy playing.

Blue Underground’s 4K UHD release of Vigilante is out now