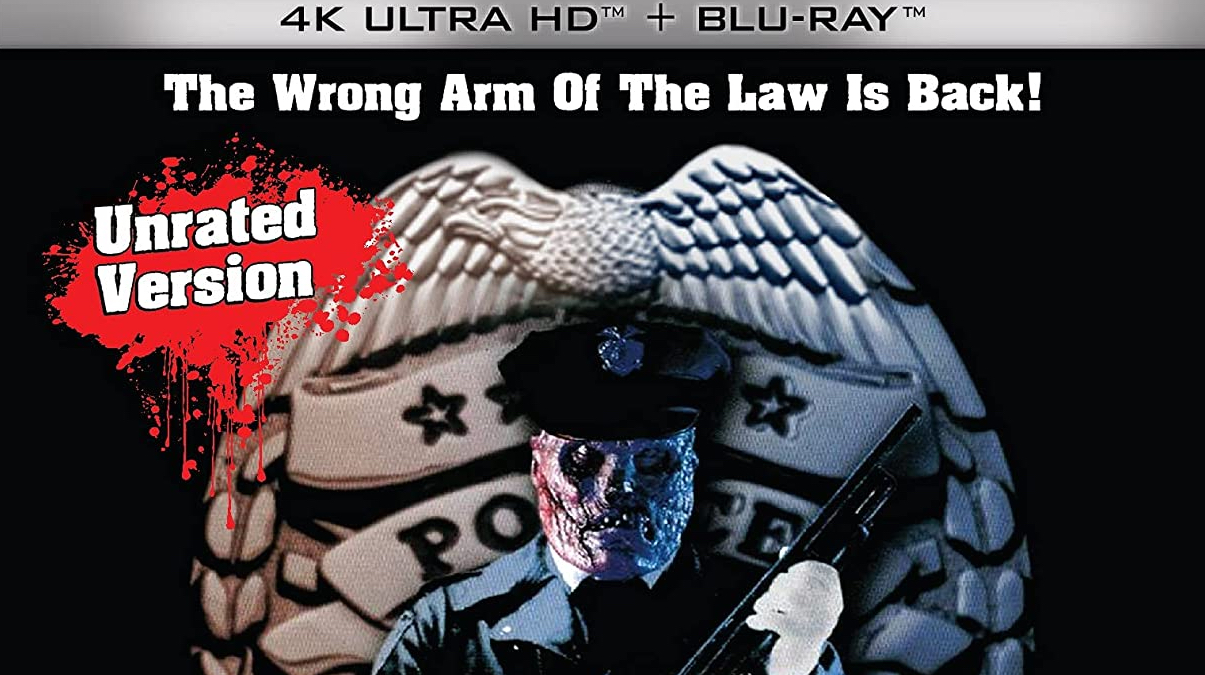 Déjà vu … the mad geniuses at Blue Underground have done it again with Maniac Cop 3’s upgrade to 4K UHD is nothing short of amazing. Sounds familiar doesn’t it?

There are sequels.  There are Sequels.  And.  There. Are.  SEQUELS.

Maniac Cop 3 falls in the third column.  The film series goes full-on Bride of Frankenstein in its final entry.  This, along with the TV Cut of Dune, is possibly the best Alan Smithee* movie ever made.

If the original Maniac Cop is the iconic entry in the series, the second is the best, then the third Maniac Cop has to be the campiest of the lot.  That isn’t a dig.  Quite the contrary.  Maniac Cop 3: Badge of Silence, its full title full stop, understands that this finale needs to go big or go home.  Now the big isn’t in budget but the overwrought nature of the story.  The script by Larry Cohen is not accidentally funnier and weirder.  The way that it peels back the layer and we find out the reason why Matt Cordell (Robert Z’Dar in his best role) like the energizer bunny keeps going.

Need I say more?  No, because if you know Cohen and Lusti… I mean Alan Smithee you know that the concept is used to turn Cordell from supernatural entity into basically the fucking Terminator.  There is no stopping Cordell who’s turned into the Patron Saint of Wrongly Accused Excessive Force Using Cops (the movie preposes the sci-fi concept that not all cops were fascists, though none of the characters in this film are but … somewhere).  What seems like random occurrences; a grimy duo of Nightcrawlers, a druggy (played by the amazing Jackie Earle Haley), and Cop Katie Sullivan (Gretchen Becker).  The way that Cohen’s script puts these characters and storylines together is as smart as anything that Cohen’s written.

Once the plot’s fuse is lit and Cordell is in motion the film is a freight train of awesomeness with Cordell laying siege on everything and everyone in his path. To his purpose?  Well, let’s just say that even the Patron Saint of Wrongly Accused Excessive Force Using Cops gets lonely as he lays hellfire, literal and figurative, down on anyone in his path.  As the film continues its steady climb to its over-the-fucking-top ending one can’t help but breathlessly laugh as Cordell continues his rampage ablaze driving a cop car down the streets of NYC (LA doubles for NYC in this instance).

The worst thing about Maniac Cop 3 is that the promise and tease of Maniac Cop 4 will never be realized.  Maniac Cop 3 is weirdo pop b-movie grindhouse entertainment of the highest order what it with someone you love.

*for those not in the know.  Alan Smithee is the nom-de-plum used when a director is so upset by production and its final product they take their name off of the film.  In its place is Mr. Alan Smithee’s name.

I know it’s a bit of a cheat but essentially my feelings about Maniac Cop 3 parallel Maniac Cop 2.  My thoughts are below.  I will add this.  Maniac Cop 3 in its 2.39 aspect ratio is more “cinematic” in its visuals than the 1.85/full widescreen frame of the first two films. Which gives this film the microscopic edge on Maniac Cop 2’s Transfer.

Now for the real reason, you’re here.  The transfer is in a word … stunning.  The Dolby Vision encoded HDR UHD disc is a showstopper.  Much like the work they have done in the past with titles like Dead and Buried, The Final Countdown, and Vigilante Blue Underground brings their delicate touch to the image.

I’ve tried to explain to people that 4K UHD discs (don’t get me started on the NOT-4K Streaming claiming to be 4K) is not about sharpness but about the luminousness of the image.  The one thing that no video format, until now, has ever been able to do is give us the range in density (the combination of contrast, color, grain structure, and black levels), and luster of 35mm or god forbid 70mm (actually 65mm, again don’t get me started).

That’s what UHD discs give us now.  For the first time on home video, things appear to mimic film in a way that nothing else can.  Blue Underground and the transfers gods they employee understand this better than 90% of the boutique label market.  This translates to an image that looked better than the original 35mm theatrical prints.  A transfer whose trashy neon-lit NYC looks as crisp as the Los Angeles winter nights it was shot on.  The clarity is not what pops here but the level of detail in the blacks of the image.  One only has to look at the hospital siege scene as Cordell walks up the stairs into blackness to be impressed with this disc.  It’s this kind of work that is jaw-droppingly good.  The work would have been impressive on a big-budget title, on Maniac Cop 3 is revelatory even compared to the initial Blu-Ray release, which in it of itself was a revelation at the time.

NOTE: This is a UHD + Blu-Ray combo.  Only the audio commentary and trailer appear on the UHD. The rest of the special features + the ones on the UHD are on the Blu-Ray.

The newly recorded Audio Commentary with Director Alan Smithee.  So this is a sleight of hand as it’s the two directors that made the film, William Lustig and Joel Soisson, which is wild as they are very candid about the entire process. Lustig discusses at the outset how he was in a depression after being fired from True Romance and being replaced by Tony Scott. Both directors admit that this was a difficult production.  Some of the details from the commentary include Cohen’s script and the reasons why it was difficult, the attempt by Cohen to cast his girlfriend, the development of the script and a wild anecdote about Cohen and a cell phone call, the original idea for the sequel that did not include Davi (which goes with the first two films format), their thoughts on lead Robert Davi, Martin Landau on set and the reasons why he was, Jackie Earle Haley and his casting, the music composed by Joel Goldsmith, working with the legend Julius Harris, bringing in Stunt Coordinator/2nd Unit Director Spiro Razatos when he wasn’t brought on initially, the pulling/stealing shots from Maniac Cop 2 b-roll, shooting the film anamorphic (2.39) rather than full frame (1.85), Lustig adding some digital FX work in his most recent restoration, some personal anecdotes about the recent passing Robert Forrester and his cameo in the film, the fact that the first cut was only 45-minutes, how they achieved the finale and the burns, discussion of the final car chase, and much more.  The frank and honest discussion that Lustig and Soisson have about the film is as entertaining as the film.

Wrong Arm Of The Law – The Making Of MANIAC COP 3 (25:05) – an archival making-of with Lustig as our guide on the making of finale of the series and the monumental diaster making the film was.  No one really holds back in their honest account of a very tough production.  Some of the details include the original pitch for the film, the original script with a Black lead, the financial difficulties attached with trying to make a Black Lead in the film, Cohen’s lack of production rewrites, the casting process of the film, how things started to go wrong, the shock of the rough cut’s length, Lustig leaving the production and how the “additional photography” was produced, the release of the film, the possible resurrection of the Maniac Cop franchise, and much more.  Comments by producer/director Lustig, producer/director Joel Soisson, producer/writer Cohen, actors Robert Davi, Robert Z’dar, Caitlin Dulany, Gretchen Becker, Director of Photography Jacques Haitkin, Stunt Coordinator/2nd Unit Director Spiro Razatos and others.

Deleted and Extended Scenes (10:26) – a play all function is available or play the individual scenes.

Poster & Still Gallery – divided into sections this gallery of 23-images consists of posters, advertising materials, production stills, and home video art you can use your next and back chapter stops buttons on your remote to navigate.

Original Synopsis – the original Larry Cohen/William Lustig treatment is presented here over seven slides you can use your next and back chapter stops buttons on your remote to navigate.

Maniac Cop 3 is a lunatic b-movie delight.  The 4K UHD disc is even more so.  HIGHEST POSSIBLE RECOMMENDATIONS!!!