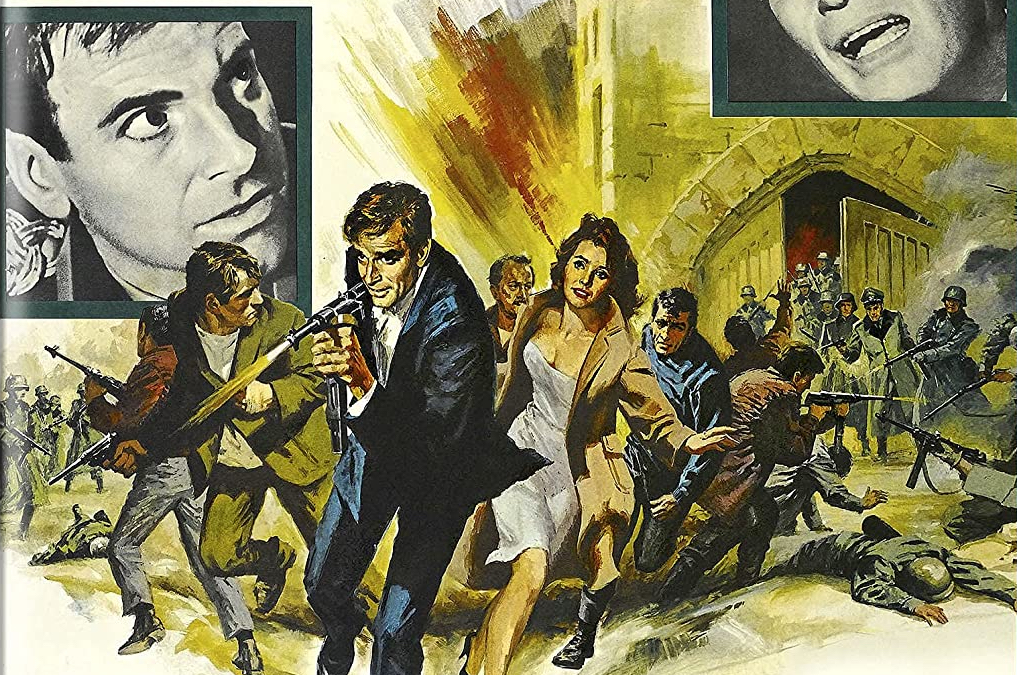 Counterpoint much like The Train has an unexpected reluctant hero facing off against a cultured Nazi officer.  The fact that they both cast Maximillian Schell as the erudite fascist.  This film trades Burt Lancaster for Charlton “The Chuck” Heston.  The results are a unique fast-paced WW2 thriller.

Symphony Director Lionel Evans (Heston) and his orchestra are on tour with the USO at the end of WW2 when a surprise German attack takes Evans and the orchestra as POWs.  It is only when General Schiller (Schell), a music lover, sees who in his midst the company is saved from execution.  Schiller gives Evans an offer to perform for him and his soldiers or be executed. Evans refuses and thus begins the battle of egos.  Who will win and will be at the expense of Evans’ group of musicians?

The speed and efficiency that Counterpoint plays out its story is a marvel.  Director Ralph Nelson takes the script/adaptation by writers James Lee and Joel Oilansky and moves through it like a hot knife to butter.  There isn’t a single shot wasted and frame that isn’t filled with narrative information.  Though the film isn’t artful or stylized the utilitarian nature and speed at which the film unspools benefit the film greatly.

The other secret weapon, or weapons, of Counterpoint, is its lead actors.  Charlton Heston and Maximillian Schell are perfectly suited to play off one another.  Both actors are big booming personalities in film.  Even when either is being quiet, they fill the room loudly.  How the film places them both in opposing scenes and scenes together gives the plot an urgency that is so vital to the film.

The standout beyond the Stars is the Music which was composed by the Los Angeles Symphony Orchestra.  The use of Beethoven, Wagner, Tchaikovsky, Brahms, and Schubert is so adroit it borders on genius.  The selection and use of that music in the action set pieces adds to the tension as the film’s edited (by editor Howard Epstein) perfectly in tandem with those pieces.  Oftentimes Classical Compositions are used for comedic effect in film.  It is supremely refreshing to see these compositions used to smashing effect in Counterpoint’s action scenes with dead seriousness.

Counterpoint is the type of WW2 Thriller many seek.  A smart and unique story told against the backdrop of War.  Make it a double feature with The Train for even greater effect.

The Techniscope shot film looks all-around luminous.  The technicolor image pops giving us an image that’s handsome and sharp.  The normal Universal Flat-looking movies of the era are definitely NOT a symptom here.  The image has a depth of field and is lit in a way that feels more like a film noir in color than the average Universal Title during this era.  The transfer’s color, contrast, and black levels are perfectly rendered here giving us a beautiful image.  Note there is a bit of an image jitter around 46:00 (which goes on for about 45 seconds).  Unsure if it was a defect in the print but it definitely needed to be noted.

The newly recorded commentary by historians Steve Mitchell and Steven Jay Rubin similar to the other high-quality commentary tracks they provided on the Blu-Rays of 633 Squadron and Mosquito Squadron the duo deep dive into this rarely discussed WW2 Thriller.  Some of the details include the admission that how off-beat Coutnerpoint and its plot are, the validity of a full orchestra travelling with the USO, the use of snow in film and the trouble it can bring to productions including chasing snow and producing reel snow, the Nazi’s dropping soldiers disguised as US Soldiers, the Universal backlot and the art department including Matte Making legend Albert Witlock, what appears to be a terrible title and also a discussion of the worst title for a movie, also a discussion of the definition of the word “counterpoint” and its use in music, discussion of Heston as a super star in the 50s and 60s and what makes him a good star, discussion of Schell as an actor throughout his career and his over the top nature that matched Heston, discussion of Leslie Nelson, Linda Hays, Peter Masterson, Linden Chiles, Anton Driffring, a discussion of what makes Heston a movie star, director Ralph Nelson and his career, work on this film and beyond, Heston’s training as a composer, details of the real Battle of the Bulge, details from the production in Los Angeles, and more.  It almost seems like being a broken record by saying that Mitchell and Rubin knock it out of the part but it’s true.  Well researched, informative and entertaining as with all their tracks, this one is a definite must listen.

Scorpion Releasing’s Blu-Ray of Counterpoint is out now.