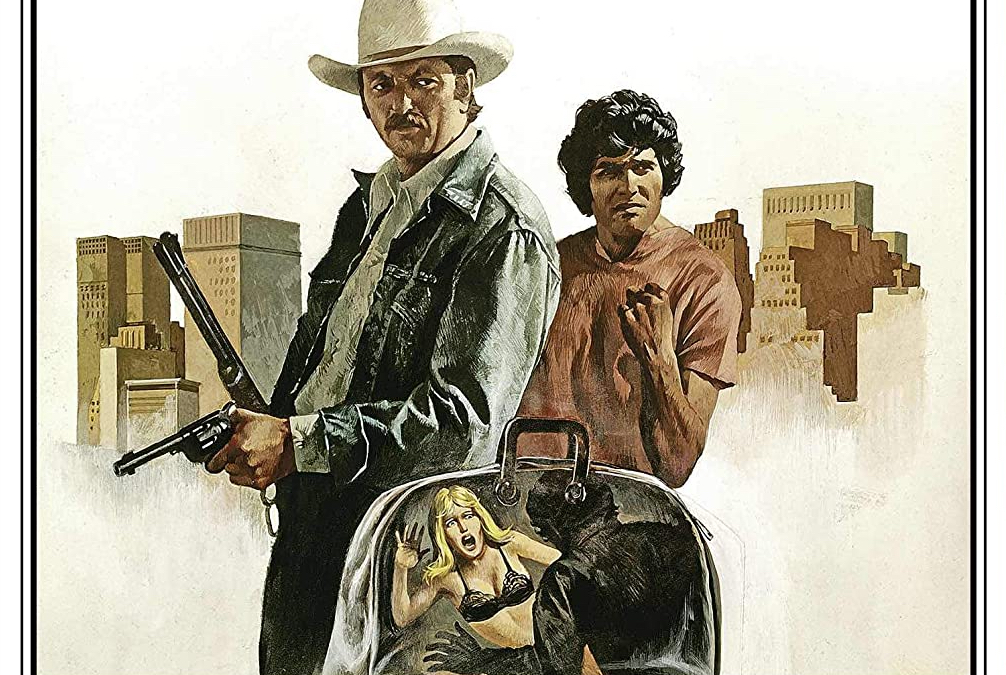 Before Taken there was Trackdown.  Meaner, leaner, but the James Mitchum/Erika Estrada actioner is every bit as entertaining cheese-filled B-Movie goodness that the Liam Neeson starrer is.  Scorpion Releasing Blu-Ray comes armed with a new 2K Transfer.

Sometimes you find a bit of aged gouda of an action thriller that minus a few hiccups is a badass piece of cinema.  Enter Trackdown that lives up to the notion of a fine aged cheese with a few parts you can live without but on the whole a scrummy piece of action.

Besty (Karen Lamm) is your average Montana Teenager circa 1976, she dreams of the bright lights of Hollywood.  After her brother, Jim (James Mitchum) leaves for a cattle run she’s off on the next bus to California.  No sooner is she off the bus than she’s conned by Latino Gang Member Stereotypes.  Only one guy Chucho (Erik Estrada) seems to be genuinely interested in her but it doesn’t matter the Gang Members not only beat him but assault her and drug her.

As quickly as they sell her into sex slavery is the moment our modern-day cowboy and his rusted F-150 enter the town.  Liam Nee… I mean Jim is soon on the trail for his sister and finds an apathetic Cop and Social Worker aptly named Lynn STRONG (Cathy Lee Crosby).  Soon Jim finds Chucho and they’re both on the trail to find Besty but will it be in time to save her already exploited body and soul.

Ignore the Kenny Roger (yes, that Kenny Rogers) tone-deaf twangy country tune that plays over the titles and the end credits.  This film is a legit exploitation action film with a mean streak a mile wide.  Director Richard T Heffron and screenwriter Paul Edwards under the economy of the low-budget action thriller more than most.  Rather than lingering on the more exploitative aspects (like sex slavery and sexual assault) they get in and out of these nastier aspects quickly

The action is surprisingly inventive and hard-hitting.  Heffron and his stunt team execute the action scenes with a clean aesthetic.  There’s an action scene set in and around an elevator and an elevator shaft that Speed outright sold from this film.  It is truly one of the highlights in a film that has quite a few solid action sequences and narrative turns.  More so than your average exploitation film of this type.

As with all exploitative films of the era, this film deals in racial and sexual stereotypes aplenty but still does find some complexity.  For the characterless gang of Latinos, they do give Erik Estrada’s Chucho more to do and more of a voice.  Estrada is great with the role he’s given, even here, you can see why the actor became a star.  Cathy Lee Crosby and Anne Archer are both terrific if hobbled by “fainting female” character moments.  Archer is able to give a more complex portrait of the Madame type than you typically see.  Which is all the more stunning considering how young Archer is.

James Mitchum as the lead trades a lot on his father’s iconography.  A dead ringer for Robert Mitchum, James has the same sort of laconic menace that made his father a star.  It is a bit more muted here as Mitchum is playing the heroic hero of heroes.  That lone doggedly determined father figure willing to kill anyone and do anything to know what happened to the one he loved.  Mitchum is at his best when he’s in the middle of an action scene, shooting or slugging it out with the bad guys.  In fact, that’s is when Trackdown truly shines; slugging or shooting it out with the evil sex traffickers of Hollywood Boulevard.

The new 2K transfer that Scorpion Releasing has done for this release has done wonders for the image.  The image is sharp with a nice healthy looking grain structure and color reproduction.  There are specks of dust and some light scratches from wear and tear of the source but taken as a whole this is a great updated transfer.

Trackdown is an elevated piece of 70’s exploitation action. Recommended!

Scorpion Releasing’s Blu-Ray of Trackdown is out now