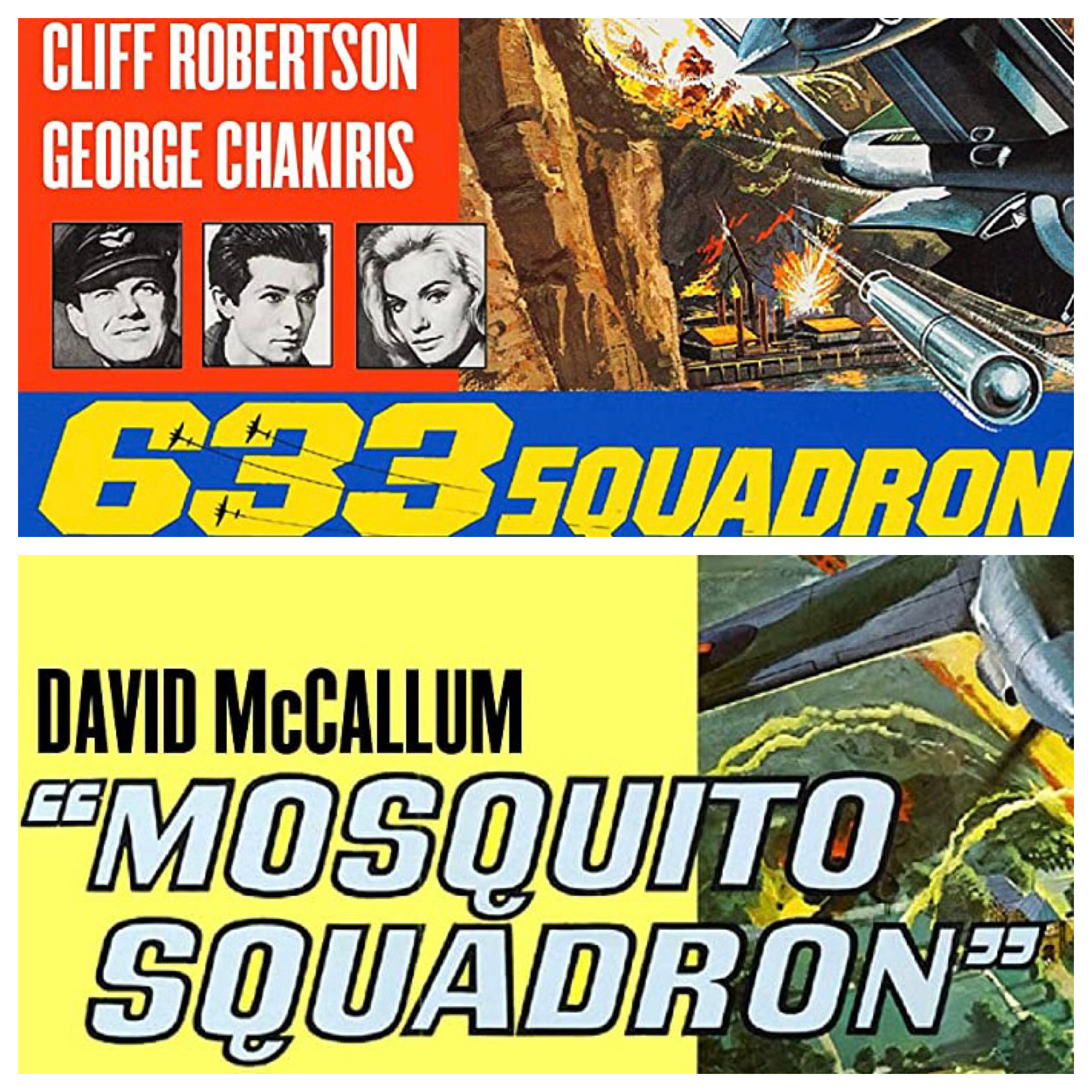 The double feature of 633 Squadron / Mosquito Squadron is the kind of WW2 war picture double feature that probably delights Quentin Tarantino as much as it delights us.  Kino Lorber continues to release unsung gems of genre.

The Nazis have a not-so-secret weapon they plan on using against England in an all out offensive.  The Brits have the details thanks to Norwegian resistance fighter Lt. Erik Bergman (George Chakiris).  The daring mission to destroy the plant where the weapon is being tested and created can only be completed by the 633 Squadron led by American Roy Grant (Cliff Robertson).  Grant and Bergman at odds but quickly become friends which the latter leaving his sister Hidle (Maria Perschy) in his care.  Feats of daring and sacrifice, men being men, dog fights, ariel bombing, many crash landings, and more…

The film was bore out of the success of The Great Escape.  Even its DNA is here thanks to both films sharing screenwriters James Clavell and Howard Koch.  The film based on a novel by Fredrick E Smith is pulpy WW2 thriller wrapped in the kind of slow burn character development filled wrapping that made The Great Escape and stories of similar ilk so appealing throughout the 1960s.  The film is structured similarly to the aforementioned film with character development and story setup the first two-thirds with the actual mission the last third.  Of course, everything goes spectacularly wrong, which is part of the fun of watching WW2 Men on a Mission films.

Cliff Robertson and George Chakiris are not Steve McQueen but they both bring their own swagger to their respective parts in which are supposed to be the McQueen lead.  They even brought in Angus Lennie as Robert’s Navigator which is essentially the same role he played in The Great Escape.  These sorts of entries are great as the ensemble cast is filled with a who’s who of British and American Character actors Harry Anderson and Donald Houston amongst others.

Though all of that is all for naught if the Ariel combat doesn’t work.  Even by today’s standards some of the real for reel shots are impressively dangerous (and probably were).  The model and FX work is charming in the best way possible close to 60 years later.  It all combines to make for impressive and fun Saturday Morning Matinee goodness.

What a difference 5-years make.  Mosquito Squadron is essentially the same story as 633 Squadron just with a lesser budget and recycled shots from 633 Squadron in tow.  This time the V3-Rockets are being developed in a Nazi Underground Stronghold aka British Estate they’re doubling for Nazi-Occupied France.  The Mosquito Squadron has gotten intelligence on the location of this Stronghold and concoct a daring mission only Quint Monroe (David McCallum) and his Squadron can successfully complete involving bouncing bombs (yes, don’t laugh as it’s all serious British business).

The biggest difference between 633 and Mosquito is the personal story it chooses to tell.  In fact, Mosquito has this very interesting personal dramaturgy over 633.  A could be romance between Monroe and his best friend, who is KIA, wife Beth (Suzanne Neve).  The edging, will they/won’t they, is the crux of the film.  The way that McCallum and Neve handle is with the sort of prim and proper restrain of a Merchant/Ivory production and nowhere near the arched and silliness of something like Pearl Harbor.

The biggest issue with Mosquito Squadron is that you’re more interest in the relationship between Monroe and Beth than you are about the bouncy ball bomb mission.  The way that things are summed up during the mission is to be expected but the way they handle the small grace notes gives McCallum moments to truly shine.

Part of the reason the drama is much more enthralling than the action is because a lot of the action set pieces are built around recycled shots and b-roll footage from 633 Squadron (both which were produced by the Mirsch Company who also produced The Great Escape).  Though once the final third begins no one will be complaining as there’s plenty of ariel combat and a few surprises to make it an entertaining ride.  Definitely Sunday Afternoon Movie material.

Both film’s transfers provided by MGM are decent.  They both have a few scratches and dirt but unless some sort of massive restoration would be done is standard in these releases.  Minor artifacts aside these are beautifully sharp handsome transfers.  The grain structure on both is nicely apparent giving them the feel of a 35mm print.

The Commentary by Steve Mitchell and Jay Rubin on 633.  Mitchell and Rubin begin with Rubin’s book and jokingly discuss the fact this is a British film. Details include how the War Film had evolved in the 1960s, the first aviation film to be shot in color and in Panavision, where they saw the film for the first time, the adaptation, the shadow of The Great Escape, the actual Mosquito bomber fighter that are featured in the film and their history in the war and in film, star Cliff Robertson’s career in film and in this film, Robertson’s work in Twilight Zone and his Live TV theatre work, Robertson is a pilot and wanted to fly the Mosquito (and his wanting to buy one), star George Chakiris’s career in film and in this film, Chakiris’s stage work and Oscar Win for Westside Story, the VFX work, the miniature FX work, the limited number of real Mosquitos had, the career of Angus Lennie, the stunt work specifically the dangers of the fire/burn stunt work, the actor John Meillon who would go onto Crocodile Dundee, the history of why how the RAF (Royal Air Force) conscripted many various nationalities of Pilots, the work of filmmaker Charles Gruaman and his career in TV, and much more.  Mitchell and Rubin give both historical context and the production for an informative and entertaining track.

The Commentary by Steve Mitchell and Jay Rubin on Mosquito.  Mitchell and Rubin begin with the Mirsch Production Company, who produced this and 633 Squadron, and their affinity for their War Films.  Details include the career David McCallum and his work here, McCallum’s work on The Man from UNCLE, McCallum’s stardom because of his Beetles-esque look, the explosion of British music and movie coming to America, the FX work of Les Bowie who specializes in lower budgeted features, the work of cinematographer Paul Beeson, the stunt work and the planes they used for the picture, the discussion of the War film as an Adventure picture in the 1960s, the work of screenwriters Donald Sanford and Joyce Perry, Sanford’s work on various TV and Films project, and much more.  As with 633, Mitchell and Rubin give us an informative and entertaining track.