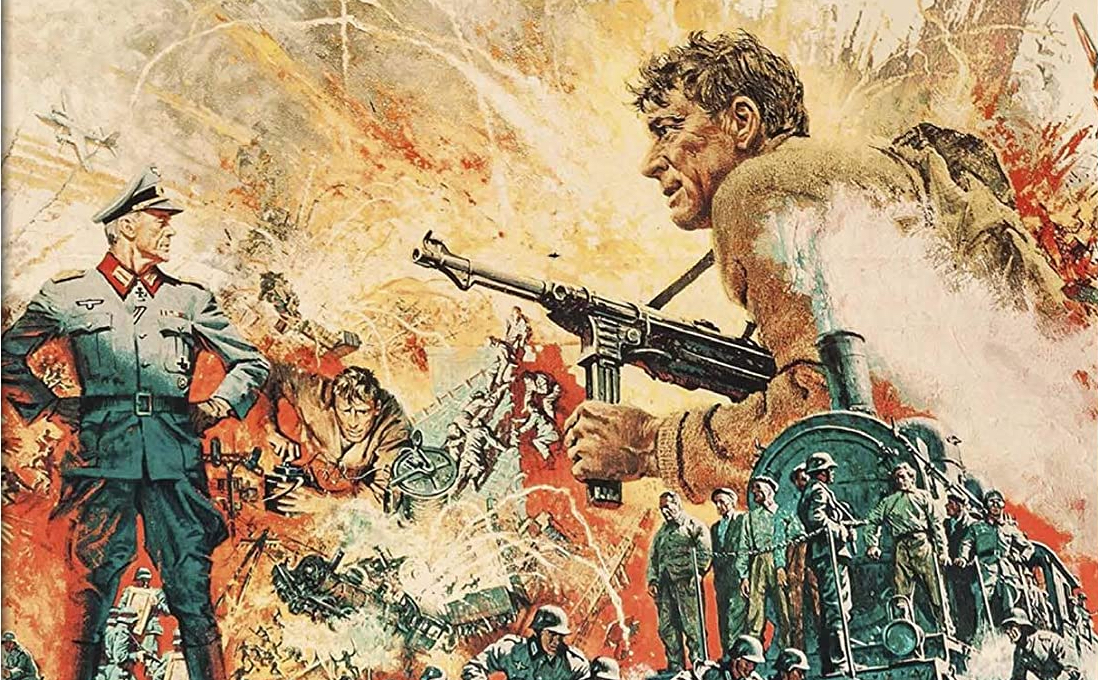 The Train is one of the best WW2 films ever produced has been out of print for some time now.  Kino Lorber has brought the film back to Blu-Ray in a great package.

The Train is a battle of wills with the fate of a Nation’s Most Prized Art at stake.  Burt Lancaster’s savvy French Train Conductor versus Paul Scofield’s maniacal art obsessed Nazi Officer.  One could not ask for a better pair to face off against one another.

Set during the waning days of WW2, Nazi Colonel Waldheim (Scofield) intends to take an entire collection of Art out of German Occupied France.  Nazi bureaucracy and the French resistance both slow this Art Heist.  The resistance knowing there is precious time left before the collection of works by Picasso, Matisse, Van Gough, Degas, and others are hidden forever in Germany.  They attempt to conscript a very reluctant Train Station Manager Paul Labiche (Lancaster), without luck.

It is only when Waldheim makes it personal for Labiche does he wakes a sleeping and cunning lion.  The two men face off in a battle of wills with Waldheim moving what he considers “his art” closer and closer to “the fatherland”.  At every turn with Labiche one-upping Waldheim with the help of the resistance, and normal people like telegram operators, hotel owners (Jean Moreau), and others.  Will it be enough to save some of the most important visages of French Pride.

Though intricate in its execution there is a beautifully simplistic and economical way that the film plays out.  John Frankenheimer’s unadorned but still stylish direction benefits a film that is at face value a War-Time Thriller.  What the film excels at is the slow burn face off against Scofield and Lancaster.  The film confidently builds and builds through its 131-minute run time.

It is not to say the film is a placid ponderous piece.  The Train is riddled with crackerjack inventive action set pieces that were filled Real for Reel.  Frankenheimer’s insistence on building and executing these realistically (which ballooned the budget by three times) is the film’s most unexpected asset.  One does not expect to see a real Spitfire chasing down a Train in any film but here it does.

Once the film does finally crescendo and the two men’s battle of wills have become a battle of actions, The Train soars.  Soaring to one of the best finales in any War Time Thriller.  The Train isn’t just a good WW2 film it’s truly Great Cinema.

This is the same beautiful transfer provided to Twilight Time for their limited release of the film.  The stark on-location black and white photography is beautifully rendered on this release.  The grain, contrast, and sharpness are all wonderfully balanced to give us a filmic type presentation.  This transfer eclipses the Twilight Time release.  Comparison of the two transfers finds Kino Lorber has done a great job ensuring that the picture benefits from newer compression software and a healthier bit-rate.

The archival commentary by John Frankenheimer is a great old-school commentary track.  Though it can be sparse in sections but do not let that fool you, Frankenheimer delivers a beautifully intelligent and informative track.  Like many who know with listening to his previous commentary tracks will know the director gives some great details about his productions and how he approaches filmmaking and here is no different.  Details include shooting in Black and White, setting up massive Dolly Shots before Steadicam was inventive, the setting up of the actual blowing up of the train yard which was done with 500 lbs of dynamite, working with Lancaster doing his own stunts and pointing them out (the oners), figuring out how to film most of the production in one location, how they achieved the verisimilitude of the film, the breakdown of how they created the Spitfire attack scene (which was filmed with a real Spitfire), behind the scenes drama, and more.  Again, those with patience through the silence of the commentary will be rewarded with great information about the production.

The newly recorded commentary by historians Steve Mitchell and Jay Rubin is a deep dive into the production, themes, and history of the film.  Details include the realism in the film, the French actors involved, Lancaster in this film and how his production company produced the film, the career of Frankenheimer and his work in Live Television, discussions of the various French and German actors that were the supporting actors in the film, Scofield as an actor in the film and his career, how the production navigated the massive production in France, and much more.  Mitchell and Rubin have a great rapport in discussing a film that feels like a personal favorite for both.

Isolated Score – the Maurice Jarre score is presented without Sound FX or Commentary.  Note because it is an Isolated score there is huge sections of silence during the track.  As it is a great Score thought that are interested will definitely want to listen.

Trailers from Hell with Brian Trenchard-Smith (5:17) – Trenchard-Smith gives us a micro commentary for this trailer. The director gives us some background details and is off discussing the trailer.

The Train is a true classic that will be seen by more thanks to KL Studio Classics release.  HIGHEST POSSIBLE RECOMMENDATIONS!!!