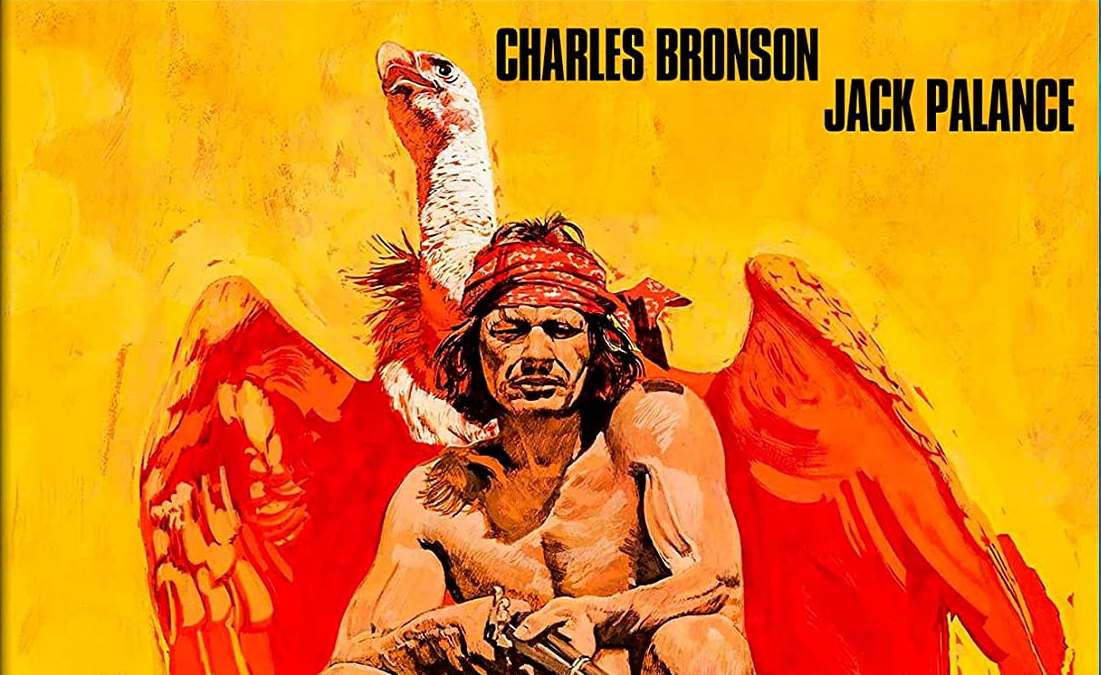 You know it’s going to go dark and bleak whenever director Michael Winner and star Charles Bronson team up.  Chato’s Land is especially dark bordering on a horror film.  Back on Blu-ray thanks to Kino Lorber.

NOTE: As will most Michael Winner films Chato’s Land does involve a scene of sexual assault.  View beware.

Michael Winner’s career has recently been more about the boorish on-set behavior behind the director’s chair than the product itself.  Chato’s Land shows the director in the middle of a truly great streak of films.  Part horror.  Part political treatise.  Part existential character drama.  All perfectly executed.

Chato (Bronson) comes into town for a few supplies and a drink.  The racist sheriff () threatens to kill Chato where he stands.  Chato of course kills the sheriff dead in his tracks.  If Chato what white we may see something approximating justice.  Not here.  He runs off as he’s Half-White Half-Apache and knows the score.  The word spreads quickly and reaches ex-confederate Captain Quincey Whitmore (Jack Palance).  He rounds up a posse (with the likes of James Whitmore, Richard Basehart, Ralph Waite, Richard Jordan, Simon Oakland, and others) of fellow confederate reprobates.  What was to be a quick lynching is anything but as they’re on the land that Chato calls home.  They may have started the battle, but Chato’s determined to end it.

There is nothing cool or coy about Chato’s Land.  It is a precision sledgehammer designed to upset and provoke.  The script by Gerald Wilson is more Cormac McCarthy than Louis L’Amour.  Coupled with Winner’s top-notch stark direction, the film is something that is hard to take in but fascinating in its execution.  There is a distance to the way that Winner approaches everything that creates a sense of foreboding.  Even the moments with Chato and his family are intended to tie knots in your stomach with that knowing full well that this is a momentary piece of happiness.

What elevates the film to neo-classic status is its dueling lead performances by Charles Bronson and Jack Palance.  Bronson’s is almost wordless purely physical performance.  Palance’s in direct opposition is loquacious.  Both men take the stage though Palance gets more screen time, Bronson’s haunting performance looms over every frame.

Chato’s Land will surprise many with just how stark it is and its unconventional ending.  Though its ending like the entire 99-minutes leading up to it, is exactly as the filmmakers had intended; beautifully powerful and unreservedly bleak.

The Brand New 2K Master is almost perfect.  The image is handsome sharp with color reproduction, black levels, contrast, and grain structure are all perfectly balanced throughout.  The transfer in the best way possible looks like a freshly struck 35mm archival print.

The newly recorded audio commentary by the dynamic duo of genre criticism Historians Howard S. Berger, and Steve Mitchell bring their patented deeply researched, personal, informative commentary magic to this bleak Bronson Western as they did recently with Breakheart Pass.  Some of the details include the minimal/spares nature of the opening scene and how the film continually evolves into complexities, the work of screenwriter Gerald Wilson working with Winner (they had 6 collaborations together in the 1970s), the parallels to Vietnam, a side conversation about Winner/Bronson’s original Death Wish and the evolution of the sequels, shooting in Spain, the ratings and how it proved successful because of the PG rating, the differences in the uncut version of the film, a great story about Jack Palance that may be the most Palance story ever, Bronson’s early life in Pittsburg and Coal Miner, Bronson and Jill Ireland relationship and Bronson’s insistence that she be cast in his films, the fact that Winner edited all of his own movies including this one, the influence of Italian genre cinema had on the New Hollywood of the 1960s and 1970s, how that paralleled Winner’s career but in a different way with his style and how they were scored, the “dummy deaths” in Winner’s filmography including this film, Bronson’s attempt to pull away from Winner, Bronson and Winner’s career in the 1980s with Cannon Films, and much more.  Just like Breakheart Pass this is a deeply researched, personal, and informative track about one of Bronson’s best westerns.

Interview with Gerald Wilson (17:49) – this all-new interview with the screenwriter Wilson.  Beginning with a discussion about how he lived in the pacific northwest and Alaska where he lived with indigenous people and learned things like tracking and more.  This leads to a lively discussion about the creation of Chato’s Land and also the real-life dangers and how thin the line is in the wilderness.  Some of the details include the development of the story with both themes and interests he had politically, how the Apache and their history influenced the film, how he helped Winner with casting, the production, and more.

Chato’s Land is an undisputed classic.  Kino Lorber has brought this one to life.  Highest possible recommendations!!!