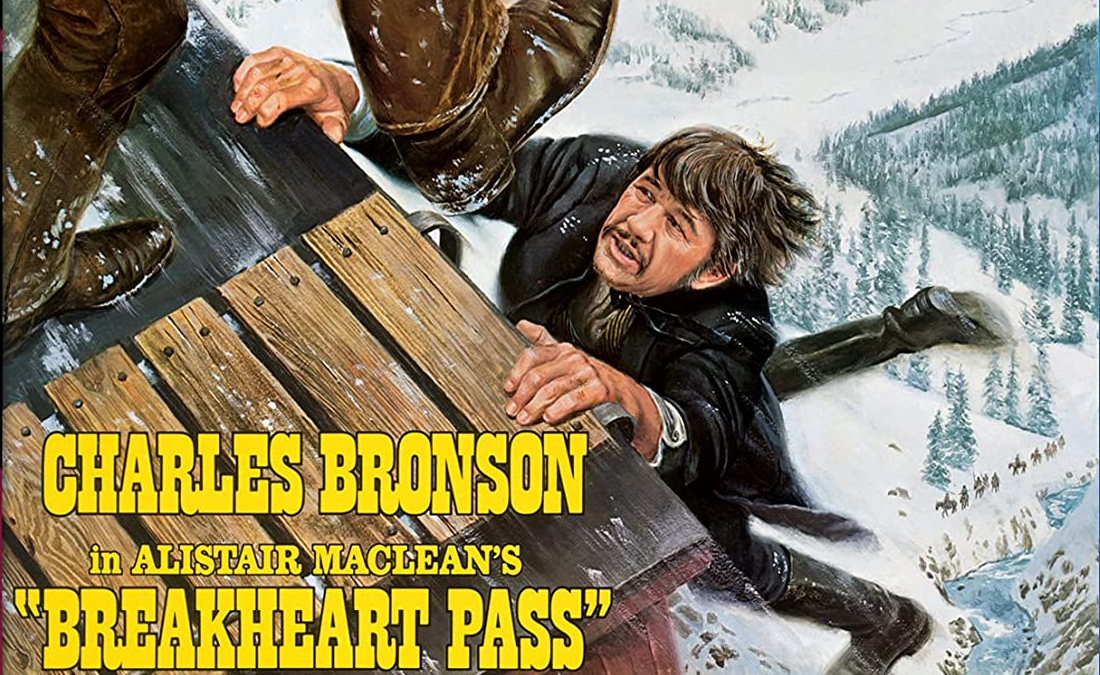 A Train set Mystery starring Charles Bronson that’s what Breakheart Pass is. It’s the cast and crew that elevates it to one of Bronson’s best.  Back on Blu-Ray with a new 2K Master from Kino Lorber.

Alistair McClean is a name that many will not be familiar with unless they grew up in the 1960s and 1950s.  The Dan Brown of his era the Novelist wrote big blockbuster adventure books and Breakheart Pass is one of those.  Long on setup and character with bursts of action until the big finale wraps everything with a tidy bow.  Adding Charles Bronson and a who’s who of 1970s-character actors and you’ve got a crackling good time.

1870 … Fort Humboldt is being ravaged by a diphtheria epidemic.  A train loaded with medical supplies and an army battalion races toward California to supply much needed assistance.  On a routine stop a Federal Marshall (Ben Johnson) manages to sniff out a criminal John Deakin (Bronson).  Deakin is wanted for multiple murders and felonies.  After some contentious words with a Governor (Richard Crenna) and the Army Major (Ed Lauter) in charge of the train Deakin is brought aboard as a prisoner.

As the train gets closer to Humboldt the more bodies begin to pile up and the mystery as to what and who await everyone at the Fort becomes increasingly dangerous.  As they get closer everyone isn’t as they appear including the Governor, the Marshall and even Deakins.  Will they all figure out what is really happening before it’s too late???

One of the biggest benefits that Breakheart Pass has from even most top teir Bronson films (exception being probably only Hard Times) is the A-List talent involved.  Not just the A-List Talent but the level of the work they bring to the film.  Director Tom Gries, Cinematographer Lucien Ballard, and Editor Byron Brandt create a powerful trifecta of talented journey-men professionals that elevate what could have been standard action fare to a bit more refined and stylishly executed entertainment.

It’s not the just the care that Gries, Ballard, and Brandt execute the tense and terse action set pieces but how they craft even the exposition scenes.  There is never a moment in the 95-minute movie that feels wasted.  There is a 150-minute version of this film with everything drawn out to the n-th degree but thankfully this isn’t it.  There is a lean and economical quality that ensure that the old dictum of “quality not quantity” is true here.  The rapid-fire dialog comes out the way that Preston Sturges loved to push out dialog giving an urgency to the proceedings.

When requiring nimble actors to be able to quickly and decisively execute that dialong there isn’t a better set of actors than the one here.  From the Crenna to Lauter to Johnson and Charles Durning and David Huddleston there isn’t an actor that isn’t capable and goes above what’s on the page.  Durning and Crenna are particularly good but shouldn’t surprise anyone who’s watched either in their voluminous careers.

Though at the end of the day its Bronson’s film and he delivers.  This reviewer always finds it odd that what Tommy Lee Jones has always been praised for Bronson was admonished for.  As the mysterious Deakin, the Star excels at what he does best.  The way that he’s able to wordlessly express exactly what he is think is a trait few have.  Even fewer still to do it with a laconic grace that makes his work so fascinating.

Breakheart Pass is a wilderness based western adventure wrapped up in some very nice clothing.  Fans of the genre will not be disappointed and even non-fans may find themselves wrapped up in the this beautifully executed piece of blockbuster entertainment.

The Brand New 2K Master is almost perfect.  Other than the opening title sequence the image is near perfect.  The opening title sequence scratches and dust is more akin to the process to create the optical that could only a giant full restoration could resolve. Color reproduction, black levels, contrast and grain structure are all perfectly balanced for a verbose image.  The transfer in the best way possible looks like a freshly struck 35mm archival print.

The newly recorded audio commentary by the three headed hydra of genre criticism Historians Howard S. Berger, Steve Mitchell and Nathaniel Thompson brings their patented deeply researched, personal, informative commentary magic to this Bronson Western.  Some of the details include the Jerry Goldsmith score, the release of the film and the lack of success, the lack of a release of the score, the director’s Tom Gries tragic end and career, Gries relationship with Bronson who worked with him a few times, the career and writing of Alistair McClean, discussion of the stacked cast including Ed Lauter, Richard Crena, Charles Durning, Ben Johnson, David Huddleston, the success of Death Wish and how Bronson chose his roles post-success of that film, the use of trains as a primary set on a lot of blockbuster films of the era, the amazing real for reel stunt work and FX work with the train and locations of the film, a nice side conversation about the new Lone Ranger film, the dangers of of stunt work in this era as opposed to the 1960s and 1970s, how films like The Wild Bunch and McCabe and Mrs Miller influenced this film, a side conversation about the cinematographer Lucien Ballard’s connection to Stanley Kubrick and their infighting, an opposing view to the criticism that Bronson never cared about his films, it’s emergence as a cult film because of a heavy rotation in the syndicated movie rotation, and much more.  Berger, Mitchell, and Thompson do it again, bringing us a great commentary track that illuminates the film and its production.

Breakheart Pass is definitely on the higher end of the Bronson filmography.  With a new transfer this one will surprise and delight new fans.  Recommended!!!