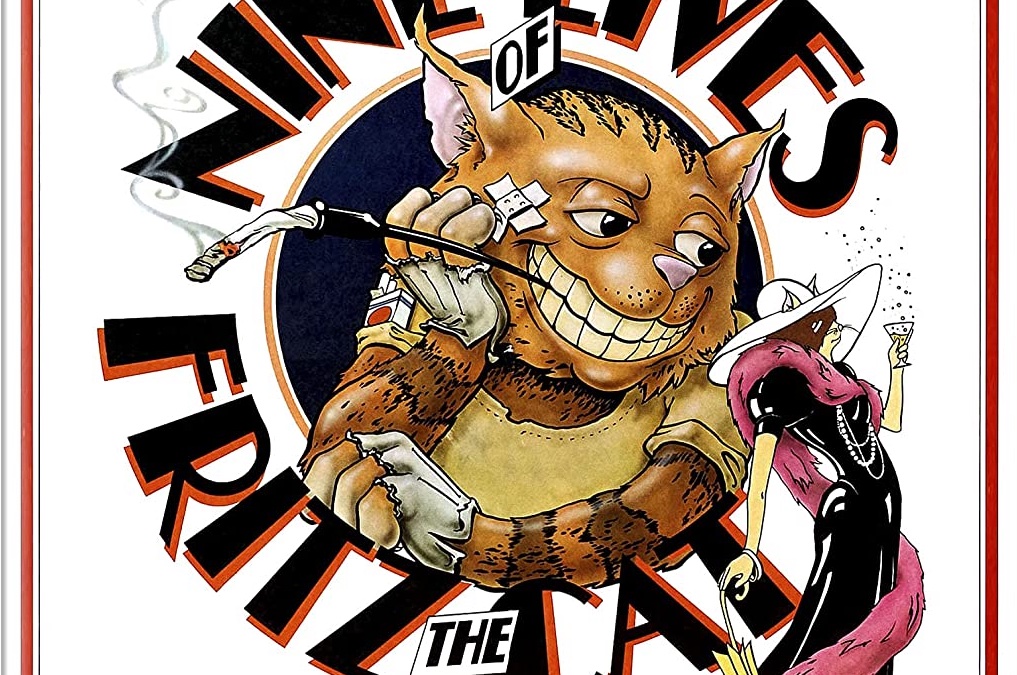 Fritz everyone’s favorite feline dilante is back in The Nine Lives of Fritz the Cat making its Blu-Ray Debut thanks to Scorpion Releasing.

Without either Crumb or Ralph Bakshi’s involvement, the sequel to one of the biggest animated hits (up until that time) feels at every turn wrong-headed.  Though, there is Hitler Cat trying to sodomize Fritz.  There’s that.

Fritz after the events of the first film got himself married and a kid.  Still a weed-smoking entitled privileged Cat.  Rather than actually face up to his responsibilities as a father and a husband he decides to smoke what could only be described as an LCD-Laced joint to drown out his wife’s, very valid, complaints and go on an adventure.  What adventure? The recounting of his NINE LIVES (get it!!!).  From bedding, a best friend’s little sister, to being an Astronaut, to being in WW2 as a Nazi (yes, a Nazi) Fritz maintains the sort of devil-may-care attitude he always maintains.

The film is sort of a let’s travel through time with an Archie Bunker type and sees what kind of whacky adventures we can get into.  The results are not amusing.  Part of what makes Fritz the Cat compelling is the dangerous territory it treads.  No one is left unscathed.  It takes aim at everyone, unintentionally or not.  The biggest issue with The Nine Lives of Fritz the Cat is that it’s not dangerous, it’s just insulting and disgusting.  Though a film with a song called “Hitler Has Only Got One Ball” can be given that much credit.

That very thin line that makes something dangerous and astutely aware of what it’s doing … A Clockwork Orange comes to mind is a tricky high wire act to succeed at.  It takes the utmost care in tone, theme, and an acute awareness of not only filmic language but a deep understanding of the subject – even if your characters are glib fuckers – all of which The Nine Lives of Fritz the Cat does NOT have.

The transfer that Scorpion Releasing was provided is a solid handsome image.  The sequel looks better on Blu-Ray in every respect than the original.  There are a few blemishes and specks that show up but nothing that calls too much attention to itself.  What we are left with is a sharp, colorful image that shows the detail and limitations of the animation.

1 comment on “Blu-Ray Review: Scorpion Releasing’s The Nine Lives of Fritz The Cat”