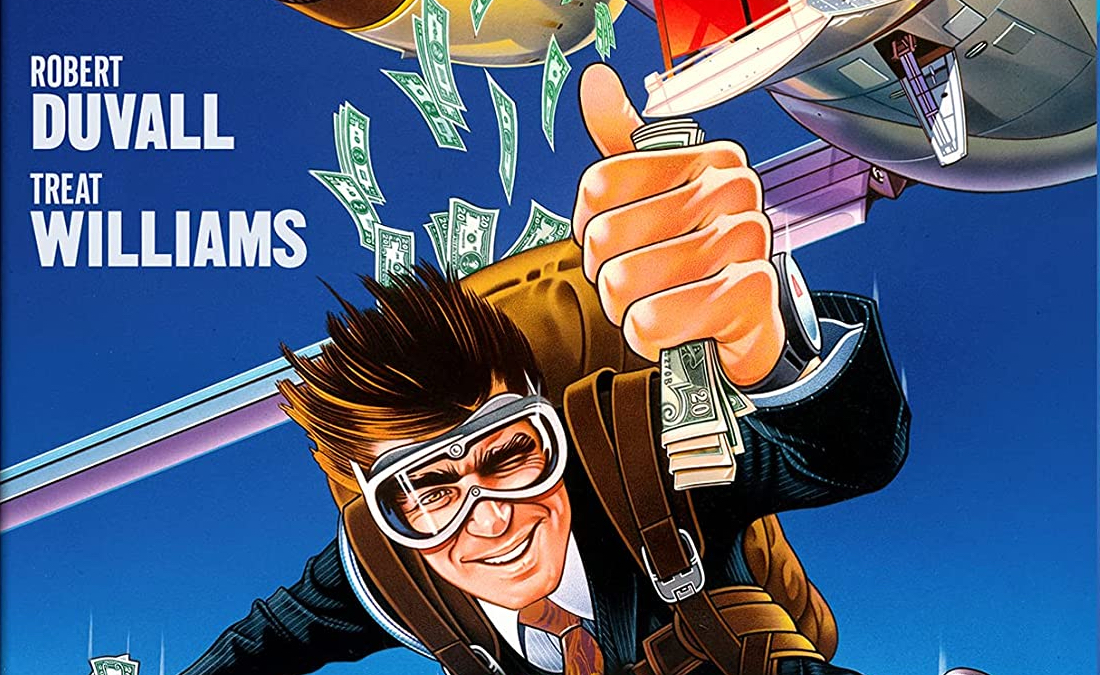 Treat Williams is all charm as the legendary DB Cooper in the fictionalized version of one great mysteries of the 1970s. The Pursuit of DB Cooper makes its Blu-Ray debut thanks to Kino Lorber.

That’s how the saying goes, right?  Roger Spottiswoode and adaptor/screenwriter Jeffrey Alan Fiskin take the legend and run with it.  What we get is a film that feels like Peckinpah-lite.

DB Cooper (Williams) jumps from a Boeing 727 on November 24, 1971.  He lands in a forest.  And by all accounts disappears into thin air … not according to this tall tale.  It’s just the beginning.  Cooper is actually Jim Meade’s ex-Army Ranger who’s planed the perfect con.  So, he thinks.  Its insurance adjuster Bill Gruen (Robert Duvall) knows this wreaks of one of his men and thinks he knows who.  With Gruen hot on his trail, Meade is going to have to be smarter and faster than his former Drill Sargent if he’s going to get away with it all.

Treat Williams as the criminal of mystery gives the role all the sort of devilish charm of a wild sprout rouge. As Cooper, Williams is a man who’s doing everything on a lark or “making it up as he goes” as a Harrison Ford character said.  That sort of Wyle E Coyote on-screen persona could wear and grate very easily and it’s a testament to both Williams and Spottiswoode that it never does.

William’s performance is helped greatly by Robert Duvall’s performance as the antagonistic Bill Gruen.  Duvall only shares three scenes with Williams but the way that his tempered button-down Gruen is at direct counterpoint to Cooper’s flamboyancy only helps to balance both.  In this era, there is very little that Duvall wasn’t at the very least compelling in.  Here as the dogged pursuer of Cooper Duvall manages to create a man of tempered intelligence and internalized annoyance at the entire situation he’s gotten himself into.

The charm of The Pursuit of DB Cooper is that other than the opening moments everything in the film is a fictionalized version of what could have happened. What transpires is a sort of wily shabby charming pseudo-Peckinpah style adventure film.  This demythologizes as much as mythologizes a legend in the same way that Billy the Kid and Pat Garrett with less artfulness. It makes sense as Spottiswoode was Peckinpah’s editor as the film is constructed like the later-era Peckinpah films.

The transfer provided by Universal is decent albeit from an older transfer it appears which is why the image isn’t on par with some of Kino Lorber’s more recent releases.  The color reproduction, contrast, and grain structure are generally good making for a solid Blu-ray image.

The newly recorded audio commentary with screenwriter Jeffrey Alan Fisken moderated by Historian Daniel Kremmer begins where the Cutter’s Way screenwriter was as a writer in 1981 when the film was released.  Some of the details include his experience on Cutter’s Way, the way that novelist rejected Dustin Hoffman’s request to acquire the project, the various talent that attached themselves (including director Frankenheimer), the account of preproduction and production of an ENTIRELY DIFFERENT VERSION OF THE FILM, how crazy it was and caused a few hiccups and quality to Fisken’s opinion, the firing of the original director, how Spottiswoode came in and the difference in directorial style, the work of Treat Williams and Robert Duvall, the research done on DB Cooper, the real-life DB Cooper and casting Williams (who does not look like the sketches of the infamous criminal), the Unsolved Mystery episode on DB Cooper, the score of James Horner, the camera work of Harry Stradling Jr and Charles F Wheeler, an interesting story about Ron Shelton, Tony Scott and Revenge, the possibility of Ron Shelton rewriting this film, the arbitration process for Screen Credit for Screenwriters, how Fisken got into screenwriting, and much more. This is a fascinating commentary with Fisken in a very honest mood that makes for a super compelling track.

The Pursuit of DB Cooper may have no basis in reality but it’s an unexpected fun adventure.  Recommended!!!!