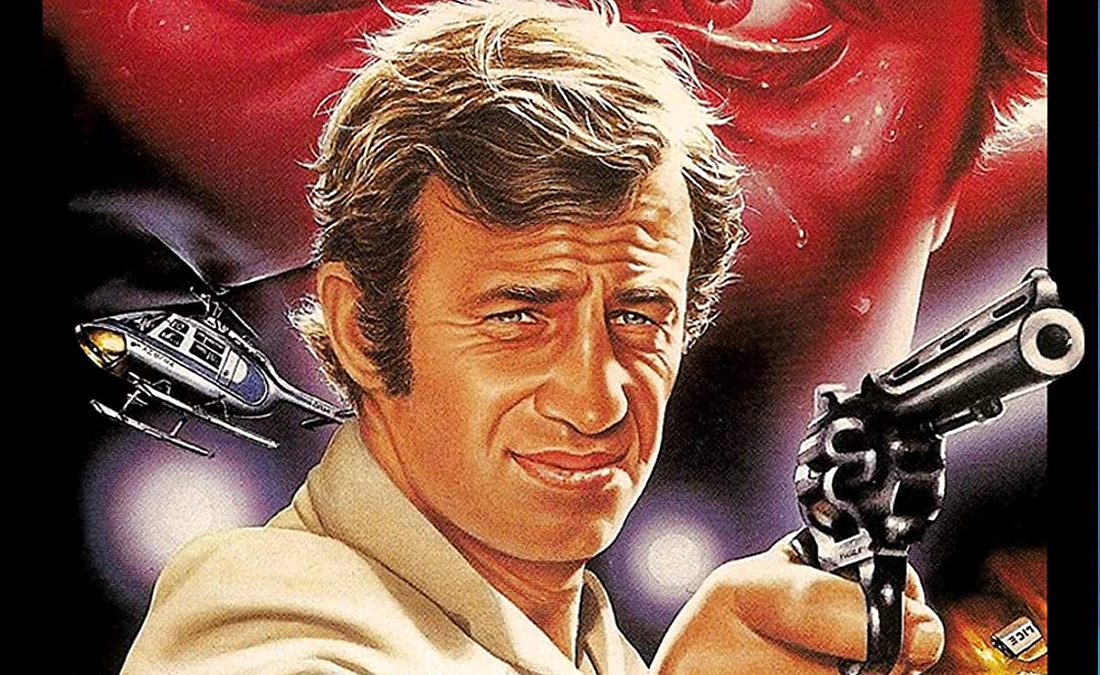 The lean French Crime Thriller The Hunter Will Get You starring Jean-Paul Belmondo makes its Blu-Ray Debut thanks to Kino Lorber.

As this reviewer has mentioned before,  part of the joys of covering Blu-Ray releases is the discovery of films in the best possible versions.  The Hunter Will Get You is one of those very films.  Light on its feet action thriller with the late screen legend Jean-Paul Belmondo in full tough guy mode is both hard-hitting and surprisingly funny.  Which if one knows Belmondo’s work (especially the later post-Mangufique phase) finds this not too surprising.

After l’Alpagueur aka The Hunter (Belmondo) has had another successful mission he is given another task by the police; catch l’Épervier aka The Hawk (Bruno Cremer).  l’Épervier is a particularly nasty criminal who enlists the help of a homeless young man to perpetrate a crime only to kill said young man.  One such victim Costa (Patrick Fierry) survives but when he doesn’t talk he’s put into prison.  It’s up to l’Alpagueur to figure out a way to get Costa out of prison and have him help him catch l’Épervier before he strikes again.

The film is similar in tone to Walter Hill’s classic 48HRS which is as adept at its mixture of humor and violence as The Hunter Will Get You.  Writer/Director Philippe Labro excels at creating a stripped-down narrative where we never question motives or ask for much backstory.  There is a balance of visual storytelling and the right mix of plot exposition that doesn’t feel like exposition that works in creating an interesting enough world to allow us to just inhabit it but never feel like we’re lost.

The action is always punctuated by terse quick violence that cancels any feeling that one would have that this is playtime.  There’s a brutality that’s on display that’s never showy like Sam Peckinpah, or even the visceral thrill that Don Seigel imbued into his films.  Labro creates set pieces that begin quickly and end quickly.  The moments where l’Épervier is “tying up loose ends” are always stark and harrowing but never go on endless.  That brevity only benefits The Hunter Will Get You creating a milieu that’s both truly thrilling and hard-hitting without the exploitation sting that comes of the films of the era.

Watching this film only adds to the sadness of screen legend Jean-Paul Belmondo’s passing.  This reviewer’s discovery of a new favorite (as is the case here) only accentuates what a true titan the gentleman was even fifty years removed from a film. The Hunter Will Get You is Belmondo at the apex of his power as a performance.  Youthful exuberance-tempered but still wily and charming as ever Belmondo’s work here is not stately but definitely laconic in a way that he was in thrillers and action films.

The Hunter Will Get You is through and through a Belmondo star vehicle.  But it is top tier Belmondo with the Star in full charismatic leading man mode with standout direction by Labro.

The transfer provided by StudioCanal is all aces.  It appears to be some kind of recent remaster (though 2K or 4K I cannot say for sure).  The image is crisp.  The contrast levels and sharpness are perfectly balanced. The color is a bit muted but that could be the original film or the updated color grading but unknown as I couldn’t find any image to reference.  Kino Lorber has done a great job of bringing this film to the US.

The all-new commentary track by historians Howard S Berger, Steve Mitchell, and Nathaniel Thompson begin with a joke that this is their “900th Belmondo commentary”.  Some of the details include similarities to 48HRS, where Belmondo was in his career when he made the film, their first viewing of this film, how the projects during this era have Belmondo (who was more concerned with other interests than films) being a little detached, the work of Bruno Cremer, the work and style of director Philippe Labro, the kind of attitude that stars like Belmondo and Delon had towards lesser directors, Belmondo’s refusal to learn English or be in American or English language films, Delon’s American career and his difference between the two French Super Stars, the stunts that Belmondo actually did which feels like shades of Tom Cruise, Belmondo’s transition from high art to genre filmmaking, Belmondo’s later era performances and health issues, the differences between Belmondo’s produced films as opposed to the films he just starred in, the post-release critical reassessment of this particular era of Belmondo film, Belmondo’s musical career and how American film industry did the reverse (eg Msuicians becoming actors not actors becoming Musicians), the dream prospect of a Belmondo and Jackie Chan film, Belmondo’s transition to direction and his similarities to other actors turned directors (specifically Eastwood and Burt Reynolds), a great side conversation about Dirty Harry and rise of fascism in film and genre films in not only the US but Europe and abroad, and much more.  Like all their commentaries this trio really gives us both a personal and deeply researched commentary track.  Note that this track was recorded sometime BEFORE the passing of Belmondo so it’s not mentioned.

Interview with Writer/Director Philippe Labro (26:40) – this archival interview with director Philippe Labro from December of 2000 is a deep dive into making the film and working with Jean-Paul Belmondo.  Labro goes through the making of the film from the development of the script, casting, production, and eventual release.  The director really leaves no stone unturned in his interview but that is to be expected with any serious French Interviews about cinema.  Definitely recommended, especially if you love the film or Belmondo because there are some truly interesting and great details.  French with English Subtitles.

The Hunter Will Get You is the kind of action thriller that’s one hopes for but rarely gets nowadays.  Highest Possible Recommendations!